Karuvalarcheri Temple is located in the town of Kumbakonam. It is dedicated to Lord Shiva who is worshipped as Agastheeswarar, and Goddess Sri Akilandeswari, who is worshipped as Karu Valarkkum Nayagi. She is the mother of the universe, and she nurtures the fetus and ensures the baby is grown well inside the womb. She is the complementary deity to Goddess Garbharakshambika, which is near to this shrine, where she helps to protect the fetus. The Goddess is Swayambhu, which means self-manifested. There is no special Abishekam or Hydration Pooja performed to the Goddess, rather she is given an oil bath. This is one of the important shrines of South India, where a lot of devotees across the globe would visit the temple to gain positive progress in their life. 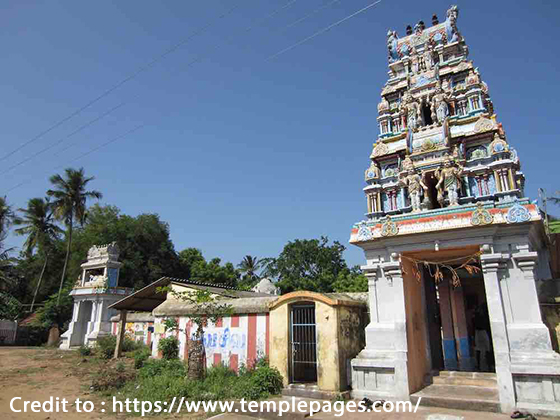 The temple is connected with Sage Agastya, who came to this temple with his consort Lopamudra. He worshipped Lord Shiva to gain higher spiritual guidance. Karu Valarkkum Nayagi is believed to have manifested herself in the form of mystical energy in the anthill of the temple, known as 'Putru Kovil.' People who worship the anthill with piety receive the blessings of the goddess.

The temple is in Dravidian architecture and is believed to be one of the oldest shrines. Inside the sanctum sanctorum, the Goddess is in the standing position. The temple has been renovated several times. The Rajagopuram, the temple tower is three-tiered. The temple has a separate shrine for Lord Ganesha, Goddess Akilandeshwari, and Lord Shiva.

Benefits of Worshipping in Karuvalarcheri Temple

Couples who wish to have child worship in this temple. The ritual for requesting the Goddess for her mercy is performed by venerating the steps of the sanctum sanctorum by clarified butter. With a special chalk powder, the steps are decorated. Once after the Pooja is completed, seven turmeric pieces and one full lemon would be handed over to the praying couple. They have to make a juice out of the lemon and consume it fully. The lady has to use the turmeric and apply it on her body. It is a belief that, even before the third piece of turmeric is over, there could be positive news about her pregnancy. Thus once the baby is grown, they have to come back as a family and pay their tributes to the Goddess. It is also believed that people looking for a life partner would also be blessed with a good partner.

How to Reach Karuvalarcheri Temple

Trichy airport is 136 kilometers from the temple.

The nearest railway station is in the town of Kumbakonam, which is almost 60 kilometers from the temple premises.

The bus stop is very near to the shrine. State transport, along with private buses gives good connectivity. Other than buses, autos, cabs and private taxis provide excellent connectivity and are available round the clock.