The Sri Varasiddhi Vinayaka Swamy Temple lies in Kanipakam,11 kilometers away from the Chittoor district of Andhra Pradesh. The temple lies 68 kilometers from Tirupati. The temple is one of the distinctive temples in Andhra Pradesh, which is famous for the temples in Tirupati, Tirumala, and Sri Kalahasthi. Kanipakam is a small town, but the Sri Varasiddhi Vinayaka temple is famous. 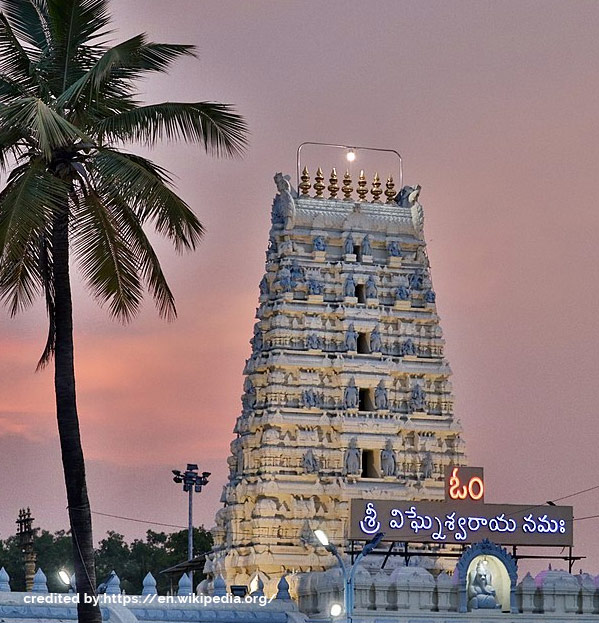 The Chola king Kulothunga Chola I built the Sri Varasiddhi Vinayaka Temple in the 11th century BC. The Vijayanagara dynasty rulers rebuilt the temple in 1336. The historic temple is called the Shrine of Water and is in the Irala Mandal of Chittoor district.

According to legend, three brothers who were deaf, blind, and mute, were digging a well one day to fetch water for their field. In the olden days, people used the Piccota system, where, while one person watered the area, the other two people used to ply on the Piccota. The brothers found the water in the well had dried up, and they could no longer use it. One of the brothers descended into the well and started digging deeper. Suddenly, the device he used to dig the well hit a hard object. He dug harder and was shocked to see blood spurting out of the well. The entire water in the well turned red, and the three brothers were stunned to find themselves rid of all their deformities.

Villagers hearing of the divine miracle rushed to the spot and found a deity of Ganesha. As the villagers continued to dig further, they were unable to find the base of God. They offered coconuts to the deity with prayers and offered pooja. They tendered several coconuts which flowed into the channel to a distance of more than one and a half acres. In the aftermath of this event, the Tamil word Kaniparakam became modified to Kanipakam. Kani is a wetland, and Pakkam is the flow of water into the marshland.

The idol remains in the original well till today, and the water is perennial. The deity continues to sit in the well, full of water always. People believe the idol is Swayambhu (self-manifested).

Another legend is about two brothers – Sankha and Likhita. On a pilgrimage to Kanipakam, the younger brother Likhita started tiring and felt hungry. Ignoring the advice of his elder brother, he plucked a mango from the nearby tree. Sankha felt bad and reported it to the ruler, asking for punishment for the sin committed during the pilgrimage.

The ruler punished Likhita severely, and he lost both his arms. The brothers later took a bath in the river near Kanipakam. As soon as Likhita had a dip in the river, he found both his arms restored. The ruler later renamed the river Bahuda (human arm). The river beside the temple is now called the Bahuda river.

Many stories are associated with the temple. People believe the idol in the well has been growing every year. An armor made for the icon as an offering 50 years ago does not fit anymore. The temple has immense religious significance because of the idol, believed to be a miracle. Popular belief has it that the idol of the deity will continue to grow in the Kaliyug, and Sri Vinayaka will make an appearance. The well from where the idols manifested still exists in the temple. The water from the sacred well is the Theertham (holy water) given to the devotees.

The water in the temple is holy and believed to cure many deformities. Devotees usually visit the Sri Varasiddhi Vinayaka temple before they visit Tirupathi. During the rainy season, the legendary and fabled well fills up with water. The Ganesha sanctuary lies in the middle of a river.

The Swayambhu is the upholder of truth. People resolve disputes by taking a special oath in front of the idol. Those involved in the dispute take a holy dip in the river and swear before the deity. Sometimes if a person has sinned, he voluntarily discloses it as soon as he takes a dip in the holy river, and before entering the temple. The temple is renowned for its purity and rich heritage.

The temple will be bustling with activity during the annual Brahmotsavams that start with the Ganesh Chaturthi. The temple celebrates the 21 –day festival with much pomp and fanfare. The temple authorities take the processional deity of Vinayaka out on different Vahanams (vehicles) on these days.

The nearest airport is the Tirupati Airport located 86 kilometers away from the temple. Local transport is available from the airport.

Buses ply from the Tirupati Bus Station located 72 kilometers away from the temple. Local transport is available from the bus station.