Dharmasthala is a temple town, well known for its Manjunatha Swamy temple. This temple is dedicated to Shiva, the supreme God of dissolution, and is situated in the Dakshina Kannada district of the southern state of Karnataka. Here, God is enshrined as Manjunatha. This place of worship is unique, for, this is a Shiva temple, whose prayers and rituals are conducted by the Madhwa Brahmins who are fundamentally the worshippers of Vishnu. At the same time, it is administered and managed by the Jains. Thus, it stands as a shining example of religious harmony.

Dharmasthala is the abode of Dharma and is the essence of humanity and faith. Dharma stands in righteousness and is the reflection of the world’s most divine emotions, regardless of caste, creed, or religion. It is the abode of religion and charity without discrimination. 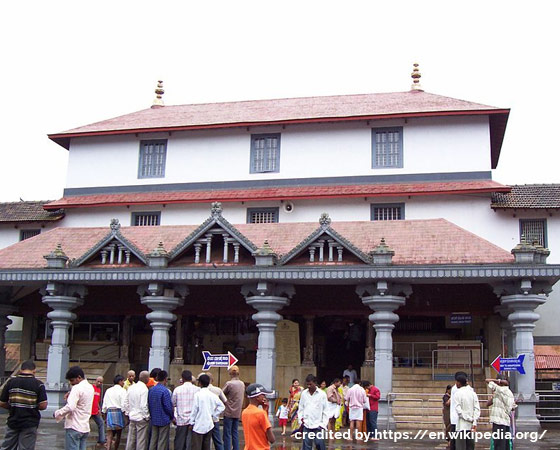 This temple is more than 800 years old and has an interesting legend surrounding its origin. This place was then a small village by name Kuduma in Belthangady, where a Jain chieftain Birmanna Pergade lived with his wife Ammu Ballalthi in their ancestral house Nelliadi Beedu.

As legend has it, once, the four guardian angels of Dharma took human forms and came to this place. These angels, who came in search of a location where Dharma, the righteousness was being practiced, found the chieftain’s abode the right place for their quest. Further, they found that Dharma could also be preached and propagated from here. The pious couple received the strangers warmly and offered them due respect and hospitality. Pleased with their sincere service, the four revealed their true identities to the couple in a dream that night and explained the purpose of their visit. Then they even advised the couple to vacate their house, so that the place could be dedicated to the worship of Daivas, the divinities. They also told them to devote their lives to the propagation of Dharma, the right code of conduct.

Birmanna Pergade readily accepted their advice as a divine command, gave up his residence by shifting to another house, and started worshipping the Daivas at Nelliadi Beedu. Soon, Pergade built separate shrines for Kalarahu, Kalarkayi, Kumaraswamy, and Kanyakumari, the four Daivas, as per further instructions from the angels of Dharma, and consecrated them. He then chose some persons of noble character as divine oracles and a few, for assisting him in administration. The angels, in turn, gave the devoted couple their blessings for protection, and abundance of kindness and charity, and ordained that the place would become well-known for its holiness.

Pergade later appointed the Brahmin priests for the performance of rituals at the shrines of the Daivas. And subsequently, on the request of these Brahmins, he installed the idol of Shiva too therein, near the Daivas. This Linga image was procured from the Kadri Manjunath Temple near the coastal town of Mangalore, and hence the deity here came to be known by the same name Manjunatha.

The Manjunatha Swamy Temple of today emerged out of this Manjunatha shrine and the adjacent structures for the Daivas. The place itself grew in religious significance as Dharmasthala, the very location of Dharma, and turned into a famous temple town visited by thousands of devotees.

The principal deity of the temple is Shiva as Manjunatha Swamy, while Shakthi, the supreme feminine energy, is also present there as Sri Ammanavaru. Besides, the guardian angels of Dharma and Jainism- Kalarahu, Kalarkayi, Kumarasvamy, and Kanyakumari, are housed there in separate shrines along with Tirthankara Chandraprabha.

The Dharmasthala Manjunatha temple has an architecture akin to Kerala temple architecture. The architecture of the temple is distinct with lavish use of wood, stone, and metals. The base structure of the temple was built using granite and laterite. The temple has a square plan and a pyramidal roof. The steep roof is made of wood and covered with gold-plated copper plates to protect the inner skeletal framework from the monsoons of the Western Ghats. The authorities conducted renovation to renew the wood carvings and methods to protect the architectural components from physical and climatic adversities.

The Dharmasthala Manjunatha temple adheres strictly to some traditional practices, and hence the devotees who come to offer prayers here are required to follow some simple rules. Both men and women must enter the temple wearing only traditional clothes. Men, in addition, will have to remove their upper garments or clothes above their waist. Further, tiny tots or children below two years of age are not allowed to enter the sanctum sanctorum.

A family of Jain Bunt manages the Dharmasthala Manjunatha Swamy Temple, that is, the community of Jains. While Birmanna Pergade, the originator of the temple and Ammu Ballalthi, his spouse are the hereditary trustees of the temple, their descendants have remained its Dharma Adhikaris or Chief Administrators, since then. As Birmanna Pergade was also known as Varmanna Heggade, all these administrators carry the same surname Heggade, which has since become a sort of a title itself. The eldest son of the Chief Administrator or the eldest male member of the family successively takes over the temple management responsibilities and becomes the subsequent Dharmadhikari of the temple. Veerendra Heggade is the present Dharmadhikari here. He is the 21st in the line of descendants of such hereditary trustees and is occupying that position since the year 1968.

As Varmanna Heggade was a local chieftain, he also performed the functions of a local judge and heard and solved disputes of the people of that area. The same tradition continues even today as Heggade performs the judicial function of deciding on the civil complaints known as Hoyulus.

The temple celebrates festivals, including Shivarathri, Ganesha Chaturthi, Navarathri, and Deepavali, which are celebrated with religious fervor, here.

The festival of Shivarathri witnesses the car festival, followed by night-long bhajans. Special poojas are performed in the worship of Sri Manjunatha Swamy.

On Ganesha Chaturthi, Ganesha is worshipped and later immersed in the temple tank. Navarathri witnesses the special pooja performed at the Sri Ammanavaru shrine and followed by nine days of religious activities and festivities that include music, folk dances, Harikathas, and bhajans.

The temple celebrates Deepawali, the festival of lights with the traditional Ranga Pooja and the commencement of the car (chariot) festival. The ceremonial idol of Sri Manjunatha Swamy is taken out in procession.

The annual festival of lights called the Laksha Deepothsava remains a grand celebration and is conducted for five days during the month of Kartika in November-December. Events like Sarva Dharma and Sahitya Sammelanas are conducted.

How to Reach Dharmasthala Manjunatha Temple

The closest airport to the temple is the Mangalore Airport, which lies 65 kilometers away from the temple.

The closest railway station to the temple is the Mangalore Railway Station, which lies 74 kilometers away.