The Navapashanam Temple is an ancient Hindu temple, located in Devipattinam, 70 kilometers away from Rameshwaram, and 15 kilometers away from Ramanathapuram district, Tamil Nadu. The temple is one of the three important shrines mentioned in the Ramayana. It is dedicated to the Navagrahas (9 planet deities) and was established by Sri Rama as per temple scriptures. The temple is usually visited on a trip to Rameshwaram. The temple is considered divine and believed to be in existence from the Puranic days. 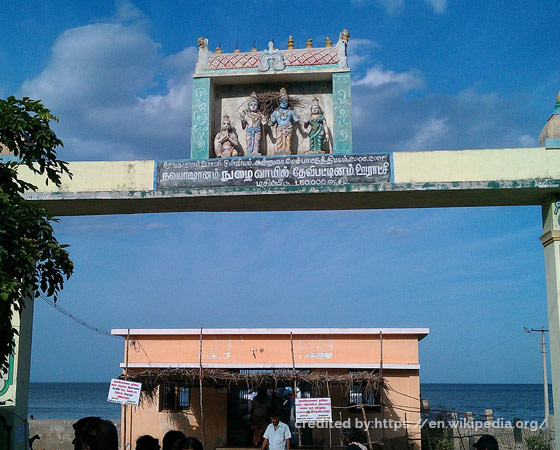 According to the epic Ramayana, Sri Rama was on his way to Lanka to free Sita Devi from Ravana, the king of Lanka. Before undertaking the journey, he performed the Vinayaka Pooja in Uppur and the Navagraha Pooja in Devipattinam. Sri Rama performed the pooja to appease the Graha Devatas and installed stones just a few meters into the sea. He calmed the high tides of the volatile sea just by raising his hand. He installed the Navagrahas called the Navabashanam (stones) in Devipattinam. The nine stones represent the nine planets.

According to temple legend, Sri Rama wanted to worship Shiva, Parvathi, and Ganesha before he waged a battle against Ravana, who had abducted his wife, Sita. After he completed these poojas at Devipattinam, he also wanted to worship the nine planets (Navagrahas), and hence he installed nine different stones to symbolize the nine celestial bodies. Sri Rama had installed the stones in the sea by calming the waves and completing his pooja. It said that he got rid of the afflictions of planet Saturn at this temple.

Another legend associated with Devipattinam is the killing of buffalo demon Mahishasura by Goddess Parvati at this spot. Mahishasura had received a boon from Brahma that he could neither be killed by Gods nor man. He then terrorized all the three realms, which made them go into hiding. The Gods then gave all their powers and created Goddess Durga (an avatar of Goddess Parvati). The Goddess then defeated Mahishasura by cutting off his head. Hence Goddess Durga is also worshipped at this temple for relief from sufferings.

The Navagrahas (9 planetary deities) are located a few meters into the sea near the shore of the village, and the installed stones represent the nine planets. The Navagrahas can be seen partly submerged in the sea but close to the beach, near the bathing ghat of the Thilakeshwar Temple, also called Navagraha Temple.

The temple was installed by Sri Rama, an avatar of Vishnu. It is believed that Sri Rama consecrated these deities in the form of stones with a mixture called Nava Passanam, and hence, these deities are said to have powers to cure diseases. Sri Rama was believed to be relieved of the effects of Saturn (Shani Devta). He was blessed by Shiva and Goddess Parvati here.

Hindus perform the Tarpanam(religious rites) for their forefathers, and devotees make it a point to visit the Thilakeshwar Temple, which is dedicated to Shiva and Goddess Parvati, where Shiva is called Thilakeshwar and Goddess Parvati by the name of Soundaryanayaki. The temple shrine also houses a beautiful deity of Goddess Durga with eight arms holding weapons.

Devotees offer nine varieties of grains to the Navagraha deities, including wheat, paddy, pulses, and til. They go around the Navagrahas and offer prayers. As these deities are depicted as stones, this temple is also known as Navabashanam (bashanam means stones).

Offering prayers at the Navagrahas Temple is believed to remove the adverse effects of planets and suffering caused by them. People take a holy dip in the sea and offer prayers here to be alienated from the sins of the past birth, for ancestors to attain Moksh (salvation), and to perform Tarpanam for ancestors.

The devotees can perform the various poojas themselves, and it is believed to bring peace, prosperity, and absolution of sins. Devotees obtain relief from afflictions caused by the adverse placement of planets in the birth chart.

Relief from Sharpit Dosha- Curse due to bad karma of past life.

The most important festivals celebrated here are Adi Amavasya (July- August) and Thai Amavasya (January- February). Over one lakh devotees throng the temple during the festival.

How to Reach Navapashanam Navagrahas Temple

The nearest airport is Madurai, which is 115 kilometers away from the temple.

Ramanathapuram, which is 14 kilometers away from the temple, is the nearest railway station.

Buses travel to Karaikudi, and they stop at Devipattinam.