The Brahmapureeswarar temple lies in Tirupattur, Trichy, and the main deity is Shiva as a Swayambu Lingam(self-manifested). Shiva is called Brahmapureeswarar as he changed the destiny of Brahma. Mother is called Brahmanayaki/Brahma Sampath Gowri. This is one of the rare temples dedicated to Brahma. Shiva is the presiding deity of the temple, and Brahma is closely associated with him. 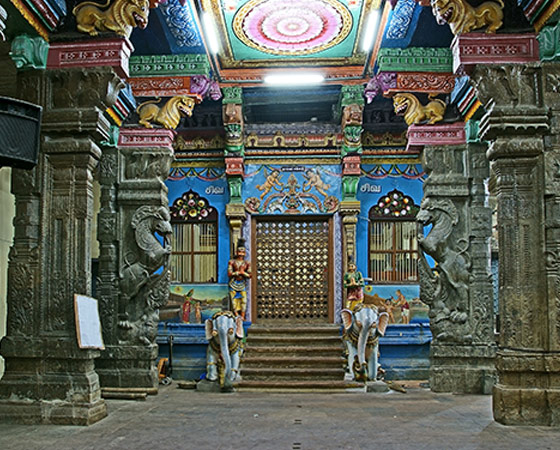 According to sacred texts, Brahma became very proud as he was the creator of the universe. He thought he was more powerful than Shiva as he had the power to create. This made Shiva angry, and he cut off Brahma's fifth head and cursed him, saying he would also lose his powers of creation. Brahma realized his mistake, and he sought forgiveness from Shiva. He set out on a pilgrimage of Shiva temples so that he would be relieved from the curse.

Brahma visited this particular temple and installed 12 lingams at the Brahmapureeswarar site. He worshipped Shiva here for a considerable length of time.

Finally, Shiva was pleased by Brahma’s penance and on Devi Parvati's intervention, gave him Darshan (divine vision), and removed the curse under the Magizha tree. Shiva gave a blessing that Brahma would have a separate shrine at this temple. Brahma would have the power to re-write the destiny of his devotees, just as he had re-written his own.

Another legend is associated with the killing of the demon Samkaraseelan who was terrorizing the Devas. The Devas sought refuge at this place, and Shiva sent Bhairava to kill the demon and liberate the Devas.

Yet another temple lore is that of King Kocchenkat Chola, who is believed to have built this temple and is one of the sixty-three Nayanmars.

Sage Patanjali, the author of astrological science with legs of a snake, is believed to have attained Siddhi (salvation) in ten shrines. The Brahmapureeswarar temple is one of them. His samadhi is seen in the temple. He is believed to be alive and writing the Yoga Sutras.

The Kanchi Periaval once said that Shiva had handed the Vedas over to Ambika, and she handed them over to Brahma. Brahma, in turn, gave the Vedas to Nandi, and they finally reached the Rishis. It is believed the incident originated here as the temple is the home of Brahmapureeswarar, Brahmanayaki, Nandi, and Patanjali Rishi. Hence the temple has special significance.

History also has it that once Brahma and Vishnu were engaged in a dispute about who was superior. They approached Shiva for intervention, and the latter took the form of a huge Shiva Lingam. He said whoever could see the top or bottom of the Lingam and returned first would be considered superior. Vishnu assuming the form of a boar dug deep to get to the bottom but failed to do so. He accepted his defeat.

Brahma then took the form of a swan and flew to the top of the Lingam and seeing the Ketaki flower flying down; he asked the flower to falsely testify that he had seen the top. An enraged Shiva cursed Brahma for telling a lie. He cut off his fifth head and removed his creative powers. He also cursed the Ketaki flower, which could no longer serve him in pooja.

Sri Brahmapureeswarar is present in the sanctum, and adjacent to this shrine is Goddess Parvati, represented as Brahma Sampath Gowri. The deity of Brahma is in a meditative position seated on a lotus. It is six feet tall and covered in turmeric.

The temple has a five-tier Rajagopuram facing east. At the entrance is the beautiful Dwaja Sthambam and the Nandi in a Veda Mandapam. Next comes the Nadha Mandapam, which has the unique feature of seven pillars that can play the Saptha Swaras. Beyond this Mandapam is the main shrine.

The main enclosure of the Lingam in the sanctum is surrounded by seven entrances, each representing a day of the week. Natural light floods the Lingam, and it appears the brightest on three days of Panguni (March- April). One can see the presiding deity clearly from the entrance. A doorway to the right in the first prakaram leads to the Amman temple and Nandavanam(temple garden).

The second prakaram has the Jeeva Samadhi of Maharishi Patanjali, Founder of Yoga, which is located adjacent to the shrine of Brahma. This prakaram also includes the Navagrahas (Deities of 9 planets) situated before the entrance to the Nandavanam in the first prakaram of the temple. There are shrines for Surya Deva (Sun God), Kala Bhairava (a fearful form of Shiva), and Gajalakshmi (Goddess of Luck and Prosperity) in the inner prakaram of the temple, as well as that of Chandikeswarar.

There is a special mandapam that houses the Shodasalings with the sixteen stripes worshipped by Brahma. This is where Shiva relieved Brahma of the curse.

The temple has shrines for Brahma, Vishnu (in the form of Narasimha), Shiva, and Jupiter. An idol of Sarabeswara is seen in the entrance hall.

There is a shrine for Shanmughanathar or Subramanya located near the Karpaga Vinayagar shrine in the temple's inner prakaram (corridor). The shrine of Dakshinamurthy is adjacent to that of Brahma in the southern prakaram of the temple. In the Mandapam, there are beautifully sculpted episodes of the Narasimha avatar.

The Sthala Vriksham of the temple is Makizhamaram. The Theerthams associated with the temple are the Brahma Theertham, Shanmuga Nadhi, and Bahula Theertham.

This is one of the rare temples of Brahma and is considered the most important, for it is here that he regained his Tejas (lustre) and powers of creation. He was also bestowed with the power of changing the destiny of people for good, depending on the individual.

Devotees throng the temple especially on Mondays and Thursdays for Darshan. By offering fervent prayers at this temple, devotees have the opportunity of turning their lives around. People go around the temple on the principle of 'Guru Brahma Guru Vishnu,' a rarity in any temple.

Benefits of Worshipping at Brahmapureeswarar Temple

Stepping into this temple itself ensures prosperity to the devotee. The temple is an important place for Jupiter, who is ruled by Brahma. People having Jupiter in an adverse position in their horoscopes pray at this temple for getting relief.

People make special offerings to Brahma with 36 lamps and 108 tamarind rice balls. Devotees walk nine rounds, and Thursday is considered especially auspicious for this offering. They invoke blessings, and their destiny is turned around in life for good. Devotees believe by worshipping Brahmapureeswarar, their destiny can be changed, and all negativities in life can be removed.

How to Reach Brahmapureeswarar Temple

Tiruchirapalli is the nearest airport to the temple, which is 38 kilometers away.

The temple is 35 kilometers from Tiruchirapalli Junction.

By cab, the temple is 30 kilometers from the entrance of Tiruchirapalli. Public buses are also available for the commute.