Basara is a town situated in the Adilabad district of Telangana. The village has beautiful greenery and gardens. One of the very few temples specially dedicated to Goddess Saraswathi, the Gnana Saraswathi in Basara, is one of the two temples dedicated to this Goddess in the country; the other temple is in Jammu and Kashmir. Saraswathi is the Hindu Goddess of learning and people visit the temple with their children for a learning ceremony called Akshara Abhyasam before they start formal education. The temple lies 205 kilometers from the city of Hyderabad. 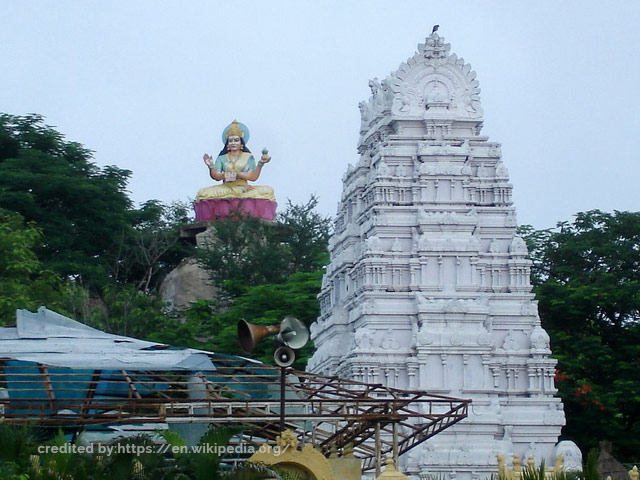 Belief has it that the Gnana Saraswathi temple in Basara is one of three temples constructed at the convergence of the Manjira and Godavari rivers. King Bijialudu ruled the province of Nandagiri in Karnataka, with Nanded as the capital. He built the temple in the sixth century at Basara. A chieftain from Nandagiri reinstated the idols in the temple. The incident took place in the 17 century after an invasion by the Mughals.

When the Kurukshetra war came to an end, Maharishi Vyasa and his disciples with Sage Vishwamitra decided to settle in a calm and peaceful place. Looking for a peaceful abode, Maharishi Vyasa came to the Dandaka forest and selected the region, happy with the serenity. Sage Vyasa did most of his writing on the bank of the Saraswathi river. Maharishi Vyasa was deep in meditational prayers, and the place was known as Vyasarpuri. The Saraswathi river has dried up, and one can see remnants of the river- bed.

As Maharishi Vyasa meditated, the Divine Mother appeared in his vision and ordained him to build temples for the Shakti trio of Maha Saraswathi, Maha Lakshmi, and Maha Kali. The sage sculpted the idols from three handfuls of sand. Later the region was called Vasara. With Marathi's

Influence in the area, the name changed to Basara. The cave of Sage Vyasa (Vyasa Muni Guha) is on top of a hill next to the Gnana Saraswathi Temple, Basara. The cave has a narrow entrance, and one struggles to enter the small enclosure. An idol of the Sage Veda Vyasa is here.

There is another popular legend from the Brahmananda Purana, which mentions that the Sage Valmiki before writing the epic Ramayana installed Goddess Saraswathi and sought her divine blessings. There is a marble Samadhi of Valmiki near the Saraswathi temple.

Significance and Rituals of the Basara Gnana Saraswathi Temple

Pilgrims mainly come to the temple to perform Akshara Abhyasam for their children before they start formal education. The children learn to write their first letters and devote books, pens, pencils, and notebooks to the Goddess of Knowledge. The temple conducts the Akshara Abhyasam daily. The Alankara (adornment) starts early in the morning, and the Goddess adorns new sarees. The puja commences at 6 a.m. in the rays of the morning sun, and the priest performs the Aarti (puja) at the temple. They offer Prasadam to the devotees after the Aarti.

People consider the temple at Basara as an abode of the Divine Trinity – Goddesses Saraswathi, Lakshmi, and Mahakali. There are no exquisite carvings, unlike other temples. The Eight Pushkarnis is one of the crucial features of the temple. A cave stands 100 meters from the temple where the devout Narahari Makula performed rigorous penance. A four-sided monolithic rock named Vedavathi produces different sounds when struck on different sides. The rock contained the jewels of Sita Devi. The village has eight Pushkarnis spread out known as Indra Teeratham, Surya Teeratham, Vyasa Teeratham, Valmiki Teeratham, Vishnu Teeratham, Ganesha Teeratham, Puthra Teeratham, and Shiva Teeratham.

The Goddess of Learning is divine knowledge personified. She radiates with grace and divinity. Devotees bring their children to start the first steps of learning at her feet, so that one imbibes awareness in an atmosphere of spirituality and peaceful aura. Goddess Saraswathi is the symbol of knowledge in Hinduism and represents knowledge, power, and enrichment of the mind.

The temple celebrates the main festivals of Maha Shivarathri in the months of February-March and the Devi Navarathrulu in September-October. Nearly 10,000 pilgrims visit the temple from Andhra Pradesh and Maharashtra.

The nearest railway station to the temple is the Basara Railway Station, located around 2.4 kilometers away.

District buses run from Hyderabad, Nanded, and other nearby places to Basara.