The Banashankari Amma Temple is a Hindu temple that lies in Cholachagudd near Badami in Bagalkot district, Karnataka. The temple is dedicated to Goddess Shakambhari, an incarnation of Goddess Parvati. The temple is popularly known as the Vanashankari temple, as it lies in the Tilakaaranya forest.

It is believed that Goddess Banashankari is the sixth incarnation of Goddess Durga. 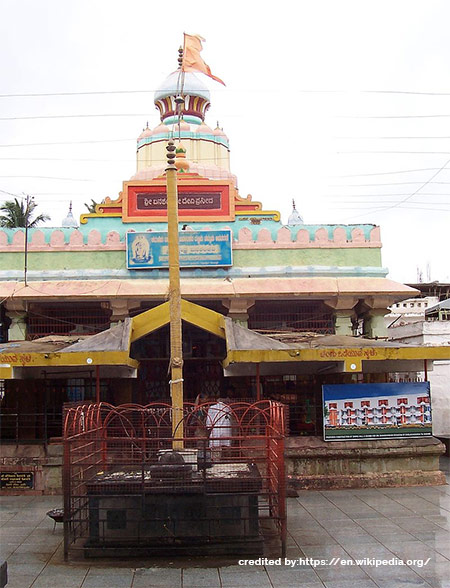 According to the Skanda Purana and Padma Purana, an Asura called Durgamasura was harassing the natives. The Devas made a sacrifice and prayed to God to come to their rescue. He sent Goddess Shakambhari to help the people being targeted by the Asura.

The Goddess arose from the fire of a Yagna (sacrificial fire) as Goddess Shakambhari. She waged a fierce battle against Durgamasura and killed him and brought relief to the people of the land. Goddess Banashankari is worshipped as the incarnation of Goddess Parvati, consort of Shiva.

The temple is surrounded by forests that have plantain, coconut, betel nut leaf plants, and trees. There was a severe famine, and the Goddess is said to have helped the people by providing them food and vegetables. The people survived, and the Goddess thus came to be known as Goddess Shakambhari.

The original temple was believed to be in existence even before the reign of the Chalukya kings. The temple was originally built in the 7th century during the Kalyani Chalukya period to Jagadekamalla I (603 A.D.), who is believed to have installed the image of the Goddess. Goddess Shakambhari was believed to be their Kuladevi (family deity), whom they worshipped with fervor. They worshipped Goddess Banashankari in the form of Goddess Shakti, the Supreme Goddess.

There is a pillar on the northern side of the temple that bears an inscription dating back to 1019 A.D.

The temple bears the style of Dravidian architecture. Later, the temple was built on the lines of the Vijayanagara architectural style. A high wall encloses the temple on all four sides.

The presiding deity is Goddess Banashankari housed in the main sanctum. The deity is made of black stone sitting on a lioness, trampling an Asura beneath her foot. The Goddess is seen with eight arms holding weapons – a Trishul (trident), Damaru (hand drum), Kapaalpatra (skull cap), Ghanta (war bell), Khadga Kheta (sword and shield) and the Vedic scriptures. The Devanga weaver community holds the Goddess in great reverence. The temple has been constructed at the very site where the Goddess appeared.

The temple’s main structure comprises of a Mukha Mandapam (portico), an Artha Mandapam (entrance porch in front of the sanctum). The sanctum is topped by a Vimanam (tower).

The temple has a 360-feet deep square water tank at the entrance to the temple, called the Haridra Thirtha, a short form of the Harishchandra Tirtha. The tank is enclosed on three sides by stone Mandapams (halls). Surrounding the tank is a Pradikshana (circumambulatory path).

It is believed many alterations were made to the temple late in the 18th century, by Maratha chieftain Parashuram Agale. The current structure is a historical blend that adds uniqueness to the overall structure of the temple.

An interesting feature to note during the Banashankari Jatre festival is that Muslims operate most of the shops that sell sweets, vermilion, clothing, and sacred threads. They have a portrait of Goddess Banashankari in their shops. People of different communities and religions come together to celebrate the festival in harmony.

Artisans from Holeyalur sell their products on the premises. They comprise of elaborately engraved wooden door frames, doors made of teakwood, and acacia.

The temple celebrates the Banashankari Jatre, an annual temple festival celebrated in the months of January-February. The temple conducts a Ratha Yatra where the Goddess is taken around the city in a procession in a chariot on the Full Moon day in January. There are cultural programs and a boat festival. The Theppotsavam (float) festival is held in the temple tank. Boats made of the banana stem are used to ferry newborns and attain the Goddess’s blessings.

During the festival, a cattle fair is held where there is a sale of white bulls. The entire town and temple are decorated with a variety of flowers and leaves. The fair starts on Bandhashtami. A Vegetable Utsava (fair) called the Palleda Habba is held, offering 108 varieties of food, containing vegetables, offered to the deity.

The festival has a religious and cultural aura to it.

How to Reach Banashankari Amma Temple

The airport at Hubli is the nearest airport to the temple, lying 114.2 kilometers away.

Badami Railway Station is the closest to the temple, lying 9.3 kilometers away.

There is the availability of public transport - buses, autorickshaws from Badami, which lies 5 kilometers away from the temple.