The Ashtalakshmi temple was built to worship the eight avatars of the Supreme Goddess Lakshmi that include wealth, success, prosperity, knowledge, courage, bravery, food, and offspring. The Goddess Ashtalakshmi bestows her blessings on people who pray with a clean soul. 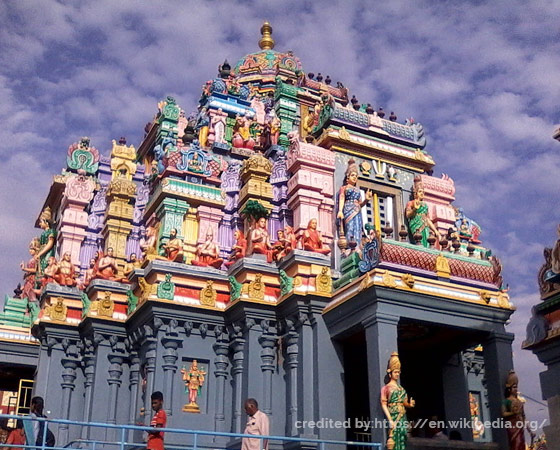 Sri Maha Periyaval, the Sage of Kanchi Mutt, Sri Chandrasekara Saraswati, had wished for the temple to be built. The devotees laid the foundation with zeal and devotion.

The temple foundation was laid in January 1974. The temple consecration took place on April 5, 1976, in the presence of the 44th Guru of the Ahobila Mutt Vedanta Desika Yatheendra Mahadesikan Swami.

After the temple was built, the temple authorities performed the Jeernotharana Ashtabandana Mahakumbhabhishekam. A total of 32 Kalasams were newly laid in the temple. They included a gold-plated Kalasam 5.5 feet high on top of the sanctum sanctorum.

According to the Vedas and Puranas, Goddess Lakshmi emerged from the ocean when the Devas and Asuras were churning the Milky Ocean. Mahavishnu married Goddess Lakshmi, and they fulfilled the desires of the devotees.

Goddess Ashtalakshmi is the deity who grants the Ashtama Siddhi (eight-fold achievements) and Ashta Aishwaryam (eight-fold wealth). As both Mahavishnu and Mahalakshmi in her eight forms reside in this temple, the temple is called the Ashtalakshmi Temple.

The temple has been built on the lines of the Sundhararaja Perumal Temple in Uthiramerur, a panchayat town in Kancheepuram district. It is a blend of ancient Dravidian and contemporary style of temple architecture.

The temple was designed and constructed in the shape of Aum, the first Vedic Mantra, Pranava. Ashtalakshmi temple is called the Omkarakshetra as the shape resembles Aum.

The temple sanctums have been built in a multi-tiered complex so that devotees can visit all shrines without stepping over any sanctum. The construction of the temple is based on the model of Ashtanga Vimana (eight-sided tower), a very ancient style of construction. This style has it's origin in Tirukkotiyur where Sri Ramanuja mastered the meaning of the Ashtakshara mantra at the feet of Tirukkotiyur Nambi. There are three forms of Vishnu, standing, sitting, and reclining, depicted on each floor.

The eight forms of Goddess Lakshmi have their shrines situated in four levels in separate sanctums. The main shrine of Goddess Lakshmi and her consort Vishnu is on the second level. Both Mahalakshmi and Mahavishnu are in standing form and seven feet tall, facing the Bay of Bengal on the east. They hold lotuses and Abhaya Varada Mudras in their hands. The main sanctum also houses the Utsava (procession) deities made of bronze.

Aadi Lakshmi Shrine - The Goddess is in a sitting position facing south. Poorna Kumbham(pot with holy water) mirror, Samaran (fly-flopper), Dwaja (flag), Rishabam (ox), Berigai (drum), lamp, and Swastika are carved at her feet. Devotees get longevity, health, and wealth by worshipping her.

Dhanya Lakshmi Shrine - Located on the first floor in the western precinct, the Goddess faces west. She has six hands that hold an arrow, an ear of grain, Varada Mudra (bestowing blessing) with her right hands and holding sugarcane, a bowl, and Abhaya Hasta (giving protection) with her left hands. There is the image of a carved elephant on her pedestal. Devotees worship the Goddess to have abundant agricultural yields.

Dhairya Lakshmi Shrine – The Goddess is in the center of the third floor. She faces the north. The Goddess has eight hands with the Abhaya Mudra, Soolam (trident), arrow, and Chakra(disc), in her right hands. She holds the Shanka (conch) and the Varada Hasta in her left hands. Devotees worship her and get the courage and confidence to face and overcome difficulties in life.

One has to climb up the stairs to the third floor that houses the shrines of Goddesses Santhanalakshmi, Vijayalakshmi, Vidyalakshmi, and Gajalakshmi.

Gaja Lakshmi Shrine – Situated in the center of the third floor, the Goddess faces east. She has four hands. She has a lotus and Varada Mudras in both her hands. There are two elephant idols on either side of the Goddess waving Samaram to her. The idol has been made from a single stone.

Vidya Lakshmi Shrine – Situated in the northern precinct on the third floor of the temple, Goddess Vidya Lakshmi faces north. She bestows knowledge and wisdom on devotees worshipping her.

Vijaya Lakshmi Shrine – The shrine is situated in the western precinct on the third floor. The Goddess faces west and is mounted on a white swan. She has eight arms holding weapons. By worshipping the Goddess, devotees overcome fear and can achieve success.

Santhana Lakshmi Shrine – Situated in the southern precinct of the temple on the third floor, the Goddess faces south in a sitting posture. She holds the shield, sword, Varada Mudra, and the Abhaya Hasta Mudra. People of marriageable age and those wanting to have children worship the Goddess. Any existing Dosha, disharmony in marriage will cease to exist when one worships the Goddess.

Further steps lead to the sanctum of Goddess Dhanalakshmi, the only shrine on the fourth floor.

Dhana Lakshmi Shrine - The shrine is situated on the fourth floor. The Goddess has eight arms and is in the sitting posture. The Goddess holds the Shankam, Chakram, bow, arrow, Poorna Kumbam, betel leaf, lotus, and Varada Hastam.

She has a Sangha and Paduma Nidhis as her gatekeepers. She showers wealth and prosperity on her devotees.

The temple also houses deities of the Dashavatars (avatars of Vishnu) in the southeast corner of the temple. The idols face north. The Guruvayoorappan shrine is in the southeast direction, and the deity faces east. Devotees perform the Annaprashnam (rice feeding for new-borns) in this shrine. The Kamala Vinayagar shrine lies is in the south-west direction in the temple. He faces east sitting on a lotus. His trunk is towards the right, and he is called Valampuri Vinayagar.

The Sthala Vriksham of the temple is the Vilvam and is unique as Goddess Mahalakshmi resides in Vilva leaves. There is no temple tank as the temple lies near the seashore. The Bay of Bengal is the sacred tank for the temple.

In 2012, the temple underwent a renovation at a cost of seven million rupees.

This is the only temple dedicated to Ashtalakshmi, the consort of Sri Mahavishnu, on the east coast of Tamil Nadu.

It is befitting that a temple for Goddess Ashtalakshmi has been built on the shores facing the sea, considering she emerged from the ocean, which was her birthplace.

The temple strictly observes the Aarukala Pooja system (six poojas a day) according to Vedic rules. The priests use only ghee for lighting the lamps in the temple. Special poojas are performed on Fridays in the Tamil month of Thai (January-February) and on Fridays in the month of Aadi (July-August), which are dedicated to the Goddess.

Mother Mahalakshmi ensures the lives of her devotees are happy and prosperous. Devotees perform Thirumanjanam (holy bath), and Archanas. They provide Vastras to God and Mother.

The devotees distribute the Neivethanam (holy offering) to other devotees visiting the temple.

How to Reach Ashtalakshmi Temple

Chennai Airport is 16 kilometers away from the temple.