The village of Annavaram stands on the bank of the Pampa river. It lies in the east Godavari district in Andhra Pradesh. It houses the temple of Veera Venkata Satyanarayana, a form of Vishnu. ‘Anna’ means food, and this place is known for constant food distribution. The temple stands on a hillock named Ratnagiri.
The temple is accessible by road and by climbing steps to the temple, made of stone. 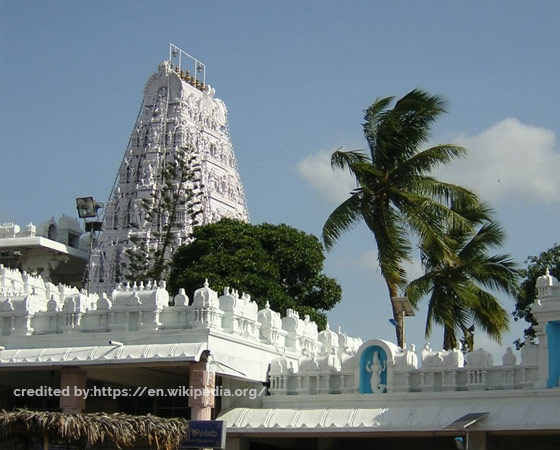 The Veera Venkata Satyanarayana temple resembles the structure of a chariot with four wheels. The front of the temple resembles a chariot. The main sanctum stands on two floors. The ground floor covers the Yantra and Peetham of God. The four sides of the Yantra contains the deities of Ganapati, Suryanarayanaswamy, Bala Tripurasundari, and Maheshwaraswamy. These four deities constitute the Panchayathanam. On the first floor, the Moola Virat (main deity) of Satyanarayana Swamy is in the center, the image of Goddess Anantha Lakshmi Ammavaru on the right and Shiva on the left. There is an adjoining shrine of Shri Rama, the original spot where they discovered the original self-manifested idol of Sri Satyanarayana Swamy.

A Kalyana Mandapam stands in front of the temple. The chariot represents seven Lokas below, and seven Lokas above. The Garbhalaya of God at the center, ruling over the universe. The wheels represent the sun and moon that remind us of the wheels of time, moving forever. The temple has a Mandapam to hold a thousand Satyanaraana Vratams at the same time. A sun-dial stands on the northern side of the temple and shows Indian Standard time.

The town of Annavaram does food distribution (free feeding) be benevolent people in the region. Another version is that the local deity has blessed the people with an abundance of anna (food).

According to legend, the people consider the hillock by the village to be very sacred. Legend has it that Meru, God of the Hills, and his consort Menaka did penance and got two sons by the grace of Vishnu. One was called Bhadra and the other Ratnakar. While Bhadra pleased Vishnu with his meditation and atonement, he became the permanent abode of Vishnu in Bhadrachalam. Ratna performed retribution, pleasing Vishnu, who settled on Ratna as Veera Venkata Satyanarayana Swamy. Ratnakar remained as Ratnagiri (hill). The hillock is 300 feet above sea level.

The main temple is on the Ratnagiri hill. The Vana Durga and Kanaka Durga shrines are in the vicinity. The temple of Grama Devata Nerellamma (village deity) is at the foot of the hill. A Brahmin in the village of Elanki Prakasam had a dream where God appeared and told him his Vigraha (deity) lay abandoned on a hillock. He instructed that the deity should be traced and re-consecrated. The Brahmin passed on the information to Shri Raja I.V. Ramarayanam, then zamindar of Gorasa estate. They managed to locate the idols, worshipped, and immediately installed the deities at the present site in 1891 A.D.

Devotees visit the temple daily, accompanied by garlands and incense sticks. They believe Sri Veera Venkata Satyanarayana Swamy will fulfill all their wishes if they pray with sincerity and dedication. The Sri Satyanarayana Swamy temple offers two Darshanas for the pilgrims. One Darshabnam is called the Seegradarshanam(speedy darshanam), and the other is the Sarva Darshanam, held between morning and night; this is a free Darshanam.

The main idol is situated 13 feet high in a cylindrical form, the base of the sanctum resembling the Creator, Brahma, and at the top in the upper sanctum, resembling Vishnu. The middle portion resembles Shiva. ocThis represents the unity of the Trimurti, where it is a rare instance of Creator Brahma united with the Protector Vishnu, and the Destroyer Shiva. The devotees worship the trilogy of gods simultaneously. The image of God forms a single unifying force of the Trimurti – Brahma, Vishnu, and Shiva, a unique occurrence.

This temple attracts devotees of Vishnu and Shiva, following Vaishnavism and Shaivism. Thousands of pilgrims across the county visit the temple of Satyadeva every day.

The Devasthanam celebrates particular festivals with great zeal that include the Sri Swamyvari Kalyana Mahotsavam. This festival is a five-day celebration of the wedding of Sri Satyanarayanaswamy with his consort Sri Anantha Lakshmi that occurs on the Vysaka Shuddha Ekadasi. The village conducts festivals every day of the Ekadasi. Only couples perform the Satyanarayan Vratam on this occasion.

The Sri Satyanarayanaswamy Temple has opened a Vedha Pathshala. It provides free boarding and lodging to the Brahmin students admitted to the Pathshala. There are religious discussions during Kalyanam days as well as on other important festival days.

Temple lockers and Annadanam facilities to tourists and visitors. The Devasthanam also operates a water treatment plant owned and operated by them. The Devasthanam has taken all measures to ensure devotees and visitors have a comfortable stay at Ratnagiri. Choultry and guest houses on the hill offer accommodation to visitors.

How to Reach Annavaram

Annavaram is well connected by rail, and the nearest railway station is located 3 kilometers from the A.V.M Railway Station. Most trains on the Vijayawada-Kolkata line stop at Annavaram.

The NH-5 (National Highway-5) passes through Annavaram, leading to the temple. Take a right turn in the junction near Annavaram. State buses run every half hour from Annavaram to Rajahmundry and Vishakapatnam. There are two Devasthanam buses also plying between Annavaram and Rajahmundry.