Adi Kumbeshwarar Temple is located in the town of Kumbakonam. The presiding deity is Lord Shiva, who is worshipped as Adi Kumbeswara. Adi represents 'first and foremost', and Kumbam means 'pot'. Thus, this was the pot which was created first, and the basis of the existence of the human race. It is very important to note the shape of the Linga, which is like a cone. The consort of Lord Shiva is Mangalambigai. This is one among the major Shiva Temples, and a “Paadal Petra Sthalam”, where Nayanmars, the ardent devotees of Lord Shiva, have sung praises of this temple and mentioned it in their works. This temple attracts many devotees, and it is evident that people feel the divine radiation of the Lord in this temple. 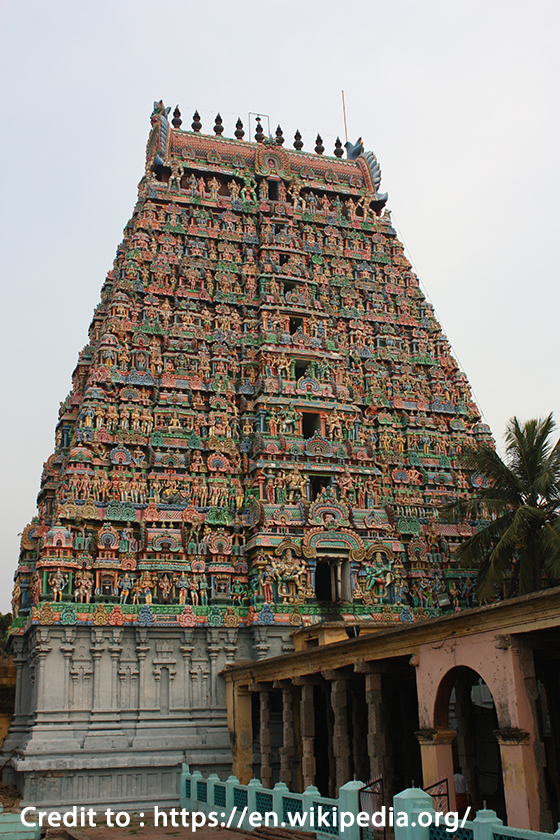 Lord Brahma, during the great Pralaya or flood, selected this city to keep a pot of “Amrita”, the elixir and divine nectar, from where the essence of Creation could start afresh. The hill of Meru was originally selected by Lord Shiva. Shiva came in the form of the hunter, and pierced the pot with an arrow, thus making the nectar flow from the pot to all sides of the nostrils. The contents of the pot fell on different locations and appeared as Shiva Lingas later. This is the shrine, where God performed the miracle known as “Thiruvilayadal”, descending to earth and helping humans. Thus, this temple is the origin of the human race and one of the revered shrines of the Shaiva sect.

The architecture of Adi Kumbeshwarar Temple:

The vast area of this temple covers almost 30,181 square feet and is spread over four acres. It is covered with Gopurams or temple towers around all sides. The Rajagopuram is nine-storeyed. This is one of the most magnificent temples of Lord Shiva. There are several temple corridors with pillars. The carvings, statues, and murals are intricate and rich with great designs. There is a temple tank, where all the water required for the rituals are drawn. There are several shrines inside the temple complex for Lord Ganesha, Lord Muruga, Goddess Saraswati, and Goddess Lakshmi. The amazing architecture is highly admired, especially the 27 stars and 12 zodiacs sculpted in a single stone.

The festival of Mahamaham, which is celebrated once in 12 years, is one of the greatest religious festivals in India and draws a lot of devotees across the globe. The major festivals celebrated here are Shiva Ratri, Chithirai Brahmotsavam, and the Butter Pot festival, which happens during February - March. Adipooram, Masi Magham, and Thai Poosam Star float festivals are also celebrated grandly here. Other important festivals include Deepavali, Pongal, Arudra Darshan, and Navaratri.

Since this temple is associated with the genesis of life, it is believed to contain immense cosmic power, and the power to rejuvenate humanity. Lord Shiva bestows on his devotees, the spiritual power to tide the challenges of life. People facing problems in health and suffer from all kinds of fear would be blessed with the grace of the Almighty to overcome their problems.

How to reach Adi Kumbeshwarar Temple

Tiruchirapalli International Airport is the nearest airport. The temple is more than 100 kilometers from the airport. It is better to use road transport to reach the temple.

Kumbakonam railway junction is the nearest railway station, and it is connected by plenty of local transport.

Buses ply to Kumbakonam, from all parts of Tamilnadu. It is one of the major cities and has good connectivity. The bus stop is located very close to the temple premises. Other modes of transport are also available for the ease of travelers.