Swaminarayan Akshardham is a Hindu Mandir – an abode of God and a spiritual-cultural complex situated in New Delhi, India. Also known as Akshardham Temple or simply Akshardham, the temple campus was opened on 6th Nov, 2005 by Dr. A.P.J. Abdul Kalam. The temple, at the centre of the complex, was built according to the Vastu shastra and Pancharatra shastra. This finely built beautiful temple complex attracts at least 70% of the tourists visiting New Delhi. The traditionally styled complex is considered a tribute to Bhagwan Swaminarayan (1781 – 1830). 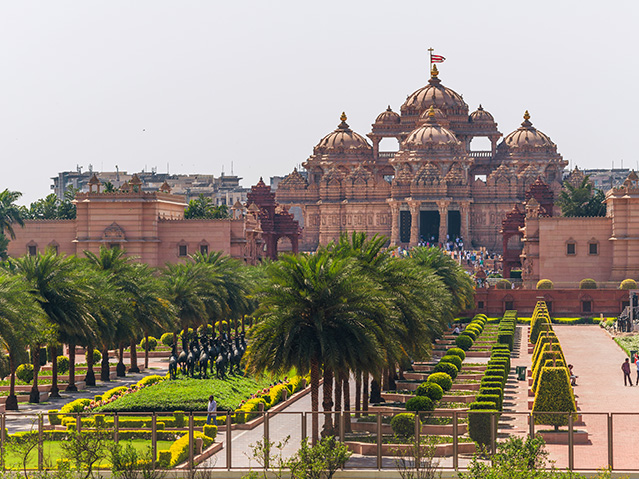 Akshardham means the divine abode of God, a spiritual and cultural complex dedicated to devotion, harmony and peace. This temple campus was built from the inspiration from Pujya Pramukh Swami Maharaj and is devoted to the existence of Lord Swaminarayan. The holy shrine was constructed by Bochasanwasi Shri Akshar Purushottam Swaminarayan Sanstha (BAPS). The Mandir was built from exquisitely carved sandstone and marble, supported by around 8000 volunteers from across the world. More than 300,000,000 volunteer hours were input in making the complex.

Akshardham temple is a wunderkind of architecture unveiling the cultural legacy of over 10,000 years. It took 5 laborious years in constructing this grand structure on the banks of Yamuna River near Nizamuddin Bridge in Delhi. It is not only an abode for worship, but also a place for education, entertainment and enlightenment.

The entire area of Akshardham spans over 23 acres and includes parks, rides, lakes, sculptures and shrines flooded over the complete area of temple. The temple complex conducts exhibitions on Hinduism, including Bhagwan Swaminarayan's life and teachings such as prayer, compassion, and non-violence.

The entire complex of Akshardham is built of stone without cement or metals, so that the monument will be live for years to come. More than thousands of these exclusive stones are carved with historical imprints that narrate the rich culture of India through pictures and carvings.

It is the main attraction of the Swaminarayan Akshardham complex intricately carved with flora, fauna, dancers, musicians, and deities. The construction of the Mandir is according to the standards of Maharishi Vastu Architecture. Built entirely with Rajasthan’s pink sandstone and Italian Carrara Marble, the temple complex features a blend of architectural styles.

The mandir also consists of 234 ornately carved pillars, 9 domes, and 20,000 murtis of Sadhus, devotees, and Acharyas. It also features ‘Gajendra Pith’ at its base which contains 148 life sized elephant statues weighing a total of 3000 tons, depicting the importance of the animal in Hindu culture. Under the temple's central dome lies the 11-foot tall idol of Swaminarayan seated in Abhayamudra, to whom the temple is dedicated.

The temple complex displays a variety of exhibits spanning both tradition and modern science.

Swaminarayan Akshardham does not ask you to follow any particular God rather it just asks people to pray their mentor or teacher to whom they owe their existence. All the theories by Lord Swaminarayan were compiled together and the place called Akshardham came in to origin. People here come to practice meditation and attain inner peace as per the historical aim of this temple.

How to reach Swaminarayan Akshardham

By Air: The nearest airport is Indira Gandhi International Airport which is 21 Km from the temple campus.

By Metro: A lot of metro trains ply from both the airport and railway station and reach the temple.