The Sheetla Mata temple is an ancient Hindu shrine dedicated to Mata Sheetla Devi who is considered an Avatar of Goddess Durga. She is also known as Lalitha and is the wife of Guru Dronacharya, the teacher of the Pandavas and Kauravas featuring in the fabled Indian epic Mahabharata. The temple is located in Gurugram in North India, near the capital city of New Delhi. 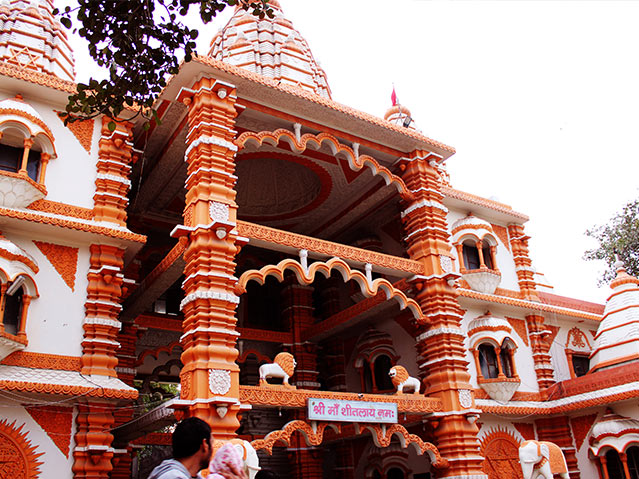 The Goddess is the very epitome of Shakti and famed for her healing powers. She is especially revered for her ability to cure the dreaded disease Small Pox. People flock to her temples to seek blessings for a long and healthy life free from ailments. She is worshipped by Hindus, Buddhists and tribal communities and some Dravidian speaking people as Mariamman, the powerful Goddess of healing. The temple today is a highly popular religious and spiritual center drawing large numbers of people not only from within the country, but also from the whole world.

Sheetla Mata resided in Keshopur village located in Delhi and her husband Guru Dronacharya visited her frequently from his Gurugram Ashram. She was totally devoted to looking after the welfare of children and spent her time tending to all the sick children, especially those suffering from smallpox. People called her Mata out of love and affection and after her demise, a temple was built in her honor. People started referring to her as Mata Sitla or Mata Masani, i.e. 'the goddess of smallpox'. The Hindu Jat king Jawahar Singh of Bharatpur is believed to have built the current structure in the 18th century to commemorate his victory over the Mughals.

Ancient stories narrate the story of her incarnation as Katyayani, the daughter of sage Katyayan to vanquish the demonic forces of the world. The demons of disease and fever that were terrorizing the world with incurable diseases were forced to relent when faced with this little Avatar of Maa Durga. Many evil forces that threatened humanity especially children, in the form of sicknesses were quelled by the wrath of this Divine child. This child is the manifestation of Sheetla Mata and revered for her ability to overcome sickness and disease.

Sheetla Devi is worshipped by many people in various Avatars in the Indian sub-continent, primarily in North India. Sheetala means cool, cold or cooling and this name stuck to her because she rendered relief to many who suffered from various diseases. She is often referred to as Maa by her devotees and many people revere her as Goddess Parvati, the consort of Lord Shiva. Several other monikers are also attached to her and she is mentioned in Tantric and Puranic literature, as also in vernacular texts. Her popularity as a folk deity endears her to people of many faiths and regions and people flock to her shrines for blessings.

Sheetala Devi is mainly worshipped in the dry seasons of winter and spring, with Brahmins and Pujaris conducting the worship. Sheetala Ashtami or Basoda Puja Is a major festival popularly celebrated in the temple, generally eight days after Holi. The Navratras season is also celebrated with great fanfare with people coming from far and wide for a Darshan of the deity. Generally, weekends also witness a large turnout of people who throng the temple just to have a glimpse of their beloved Devi. The whole temple vibrates with positive energy during festive seasons and the entire surroundings come alive, with devotees spreading the cheer to one and all. Visiting the temple is a beautiful and enlightening spiritual experience.

Benefits or Blessings of the primary deity- Sheetla Mata Mandir

Sheetla Devi is known for her compassion and those who worship her are relieved of their sufferings. Many women come to seek the blessings of the Goddess for the well-being of their children and keep them free of disease. She is especially renowned for her capability to cure small pox, sores, pustules and other diseases which mainly strike children. Her benevolence also drives away ghosts, demons and other evil spirits which trouble infants and babies.

Sheetla Devi Mandir is located in the state of Haryana in North India. A popular religious and tourist center located south west of the national capital Delhi, it is well connected by Air, Rail and Road to other parts of the country.

By Road: Gurugram is well connected by bus service to all neighboring cities, with state and interstate buses plying frequently to and fro.

By Metro: Gurugram is also connected by metro rail to Delhi.

By Air: The nearest airport is located at New Delhi, which is approximately 15 km from Gurgaon.

Buses, taxis and three wheelers ply frequently from these locations to the Sheetla Devi Mandir.