Introduction about the Nasiyan Temple

The Nasiyan Digambara Jain temple is located in Ajmer, in the Indian state of Rajasthan and was built in the year 1865). It is constructed mostly of red sandstone, which gives it a reddish tinge. Also known as the Golden Temple, this magnificent structure is dedicated to Rishabha or Adinatha (first of the 24 Tirthankars of the Jain faith). The elaborate main chamber is popularly known as the Swarna Nagari (city of gold) and features several gold plated wooden figures relevant to the Jain religion. 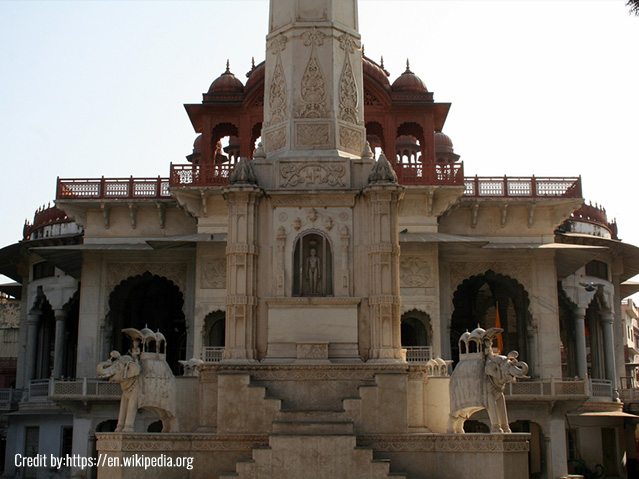 The highlight of this amazing structure is the intricate three dimensional model depicting the facets of the Jain concept of the ancient world. The temple and the museum located within its premises are owned by the prominent Soni family of Ajmer. This remarkable shrine is a major pilgrim and tourist center attracting visitors from all over the world.

History of the Nasiyan Temple

Construction work of this incredible structure was taken up by Rai Bahadur Seth Moolchand and Nemichand Soni in the year 1864, and subsequently the image of Lord Rishabdev was installed in the Sanctum Sanctorum in 1865. Under the guidance of the great scholar Pandit Sadasukhdasji of Jaipur who supervised the construction work, the temple was completed in a short period of time. This awesome shrine is situated on Prithvi Raj Marg in Ajmer and stands as a glorious testimony to the brilliant craftsmanship of the artisans.

Significance of the Nasiyan Temple

The Nasiyan temple is a glorious tribute to the religion of non-violence practiced by the Digambara sect of the Jain community. Though it was completed in a matter of a few years, the innumerable sections of the stunning three dimensional model were painstakingly assembled by master artisans of Jaipur over a staggering period of almost 25 years.

All the individual parts were fashioned in accordance with the story of Rishaba, based on an old manuscript by Acharya Jinasena. Though many Jain temples feature painted or figurative representations of the five tenets of Jainism, this particular shrine espouses those auspicious attributes in a brilliant manner. A huge custom built hall was erected just for the purpose of conveying this in an effective fashion.

Architecture of the Nasiyan Temple

This brilliant piece of architecture is probably one of the most astonishing Jain religious centers ever built. The two storied structure is divided into two sections, with one serving as the worship area and another, a museum with a hall. The ornate hall is adorned with expensive Belgian stained glass, mineral color paintings and exquisite stained glasswork.

A mind-boggling 1000 kg of gold has been used in the construction of this marvel which so effectively depicts instances of Jain mythology in a panoramic manner. The interiors of this awesome structure are replete with silver balls suspended from the ceiling and topped by a Vimana. Intricate silver linings and precious gems also embellish the interiors, adding luster to the overall appearance. Elaborate glass engravings and paintings etched with Jain scriptural artwork are prominent. The temple exudes an aura of peace and calm, beckoning visitors to worship and pay homage.

Location – How to reach the Nasiyan Temple

The Nasiyan Jain Digambara temple is open 365 days a year to visitors of all religions for a very small entry fee, and is easily accessible by several modes of transport.

By Air: The nearest Airport is in the city of Jaipur, around 138 km away.

By Rail:The Ajmer Railway Station is about 5 km away from the temple.

By Road: Ajmer is well connected by bus to neighboring towns and cities.

Local Transport:Local buses, taxis and three wheelers are available from various points in the city to take one to the temple.