The Baha’i House of worship in Kalkaji, New Delhi is a magnificent structure and one of the most visited edifices in the world. Till date, it has drawn over 70 million visitors from all over the world who come not only to worship but also to admire its architectural brilliance. The building is in the shape of a Lotus and considered a masterpiece of design. It is dedicated to the teachings of the Baha’i faith, which propagates the oneness of God, oneness of Religions, and the oneness of Mankind. The temple is open to people of all religions and races and does not discriminate between caste, creed or faith. This awe-inspiring structure is one of six Baha’i houses of worship in the world, along with the ones in Sydney, Australia; Apia, Samoa; Kampala, Uganda; Panama City, Panama; Frankfurt, Germany; Wilmette, USA. Though all the structures share the same basic design concepts, each reflects its own unique characteristics, in keeping with the culture and tradition prevailing in the country of origin. It is considered a must-visit site and holds the distinction of being one of the most visited buildings in the world. 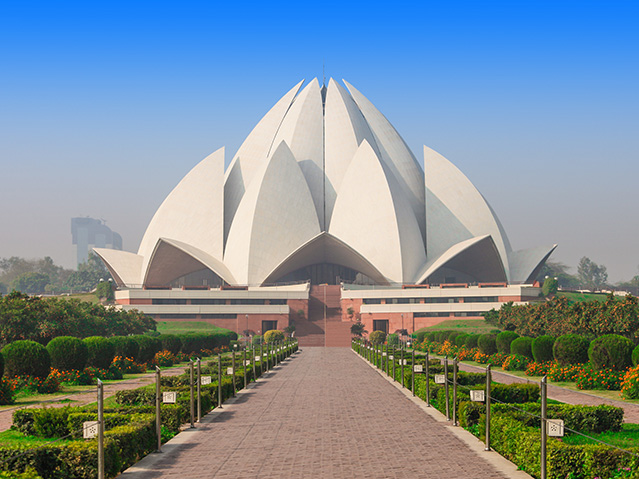 The site on which the temple is located was bought from the money donated by Ardishir Rustampur of Hyderabad, who generously contributed his entire life savings towards the construction of the temple. The temple is located on a massive expanse of 26 acres and took roughly 10 years to complete from concept, design to actuality. It was completed in 1986 and stands testimony to the efforts of the architect and builders, who worked tirelessly to make it a reality.

The tenets of the Baha’i faith preach unity in diversity and thus, the doors of the temple are thrown open to any and everyone. There is no image inside the temple and people are free to read or chant sacred writings from any religious text. Delivering sermons, lectures or attempts at fundraising are strictly prohibited, as is reading from non-scriptural texts. Musical instruments cannot be played inside but Cappella musical rendering of prayers and readings from texts are permitted. Ritualistic ceremonies are discouraged and the temple does not follow any particular pattern of worship. The temple was constructed with the idea of integrating people of all faiths and provides a venue for everyone to come forward, congregate, reflect and worship.

Visitors are advised to access the information center inside the temple, which is a treasure trove of texts, photographs, films, scriptures etc. related to the Baha’i faith. The temple also houses an audio-visual room and a library where one can browse through a vast selection of religious books.

The Temple was in a conceptual state since 1953 and it was only in 1976 that the Iranian architect Fariborz Sahba was entrusted with the task of designing the structure. The British firm, Flint and Neil was approached for the structural design project and the ECC construction group was deputed to undertake the actual building work. The entrance of the temple is a visual delight with several ponds and gardens adorning the premises. The nine sides of the temple are made up of 27 marble petals, aesthetically aligned in groups of three. A huge Prayer hall made of marble greets visitors and many linger within its confines to greet and mingle with people from all over the world. The temple is also credited with being eco-friendly and most of its energy usage is provided by solar power. This world famous architectural marvel has received International acclaim and the recipient of numerous awards for design and excellence.

A grand Cappella musical festival is held in the Baha’i temple in the month of May every year. Singers of all faiths and religions from all over India and the world participate in the Choral musical proceedings based on scriptures of various religions. Two concerts are held and singers chant verses from Classical, Gospel and Negro spiritual texts.

By Metro: The nearest metro station is the Kalkaji Mandir, which is very close to the temple.

By Air: The distance from the Airport to the temple is about 10 km.

By Rail: The Railway Station is about 14 km away from the temple.

By Bus: Delhi is well connected by bus service to all major hubs in the country.

Local Transport: Buses, taxis and three wheelers are available to take one to the temple from various points of the city.