Introduction about the Kheer Bhavani Temple

The Kheer Bhavani temple is an ancient Hindu religious shrine located in the state of Kashmir, India. It is dedicated to Ragnya Devi, an Avatar of Goddess Durga who is deeply revered among the Hindus of Kashmir. Situated 22 km east of Srinagar near the village of Tul Mul, the temple is set amongst picturesque surroundings covered with Chinar trees. 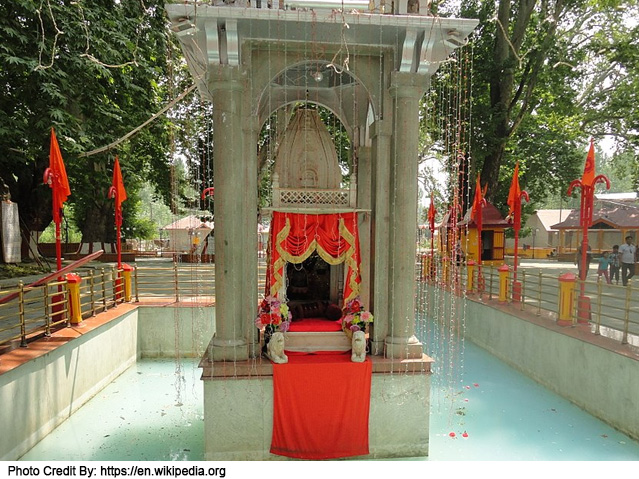 It is constructed above a sacred spring which is said to change its colours with the onset of every new season. The tradition of offering kheer to the presiding deity in the spring is a truly unique feature of the temple, with many preparing the dish themselves. It is a major pilgrimage center for Hindus and many devotees from all over the world visit the temple to seek the blessings of the deity.

History of the Kheer Bhavani Temple

The existence of the temple finds mention in several Hindu texts and many legends are associated with it. Tales from the Hindu epic Ramayana also relate stories of the temple and its attributes. It is said that Lord Rama instructed Hanuman to relocate the shrine from Sri Lanka to India as the Goddess was disappointed with Ravana’s villainous ways and did not want to want to witness his atrocities.

The present structure was constructed by Maharana Pratap Singh in 1912. It was later renovated by Maharaja Hari Singh. The shrine is built in the middle of a spring with a small marble Sanctum where the Goddess' idol is installed. Many prominent personalities have visited the shrine including Swami Rama Tirtha and Swami Vivekananda.

Significance of the Kheer Bhavani Temple

The Goddess of the Kheer Bhavani Temple is fondly referred to by several names in keeping with Indian tradition. The shrine is situated on a heptagonal spring which flows from west to east. It is dedicated to the Goddess and changes colors, taking on various hues as and when the seasons change. The waters changing to black are highly inauspicious and portend various calamities striking the state. The temple holds the distinction of being the primary religious shrine of Kashmiri Pandits and to this day, many visit the shrine for a glimpse of their favorite deity. The shrine is surrounded by an expanse of land covered with smooth and decorative stones. Several chinar trees abound in this area and many pilgrims rest on mats of grass under the shade of these trees.

Even though the temple is frequented by visitors throughout the year, it literally comes alive on the occasion of Shukla Paksha Ashtami. Devotees observe a fast on this day and gather at the temple to offer prayers to the Goddess. Bhajans and Yagnas are also performed on this day to propitiate the Goddess. Jesht Ashtami is another such occasion when people throng the temple to have a glimpse of the deity. The festival concludes with a Maha-Yagna being conducted to please the Goddess. Fairs and yagnas are organized during the annual festivals and Navratnas, with devotees from all over participating in the proceedings.

Benefits or Blessings of the primary deity- Kheer Bhavani Temple

It is believed that all those who worship at this shrine are granted what they desire. The Mother grants the wish of all those who meditate and worship her on Panch Dashi Mantra, especially during Nav-Reh. People flock to her temple from within the state and throughout the land to attain the blessings of Mata Ragnya Devi.

Location – How to reach the Kheer Bhavani Temple

Situated at a distance of around 22 km east of Srinagar near the village of Tul Mul, the Kheer Bhavani temple is easily accessible by various modes of transport. Regular tourist taxis and buses ply from Srinagar to the temple.

By Air: The nearest Airport is located in Srinagar, which is about 22 km away from the Temple.

By Rail: The nearest Railway Station is in Udhampur, which is about 130 km away.

By Bus: Srinagar is well connected with neighboring towns and cities by bus service.

By Road: Srinagar is accessible by road via National Highway 1 – A.