Khajuraho Temples are a group of shrines dedicated to both Hinduism and Jainism, located in Madhya Pradesh, India. Known for its breathtaking sculptures and aesthetics, Khajuraho group of monuments is one of the UNESCO World Heritage sites in India. These temples were built together, but are dedicated to two religions – Hinduism and Jainism, symbolizing unity in diversity and acceptance & respect of these two religions in the region. Of the surviving temples, 6 are dedicated to Shiva and his consorts, 8 to Vishnu and his incarnations, 1 to Ganesha, 1 to Lord Surya (Sun), 3 to Jain Tirthankaras (spiritual leaders). 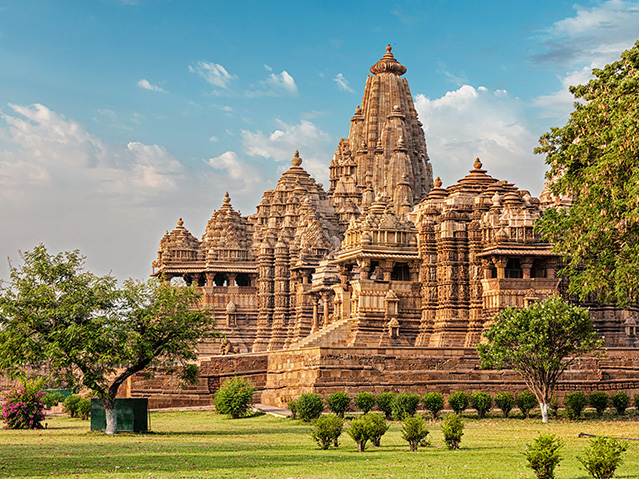 Most of the Khajuraho temples were built between 950 and 1050 CE during the Chandela Dynasty. According to histories, the temple site had 85 temples by 12th century and 25 only survived, of which the Kandariya Mahadeva Temple built by King Vidyadhara is the famous for its intricate sculptures and arts. Kings Yashovarman and Dhanga are famous for their construction of The Lakshmana Temple and Vishvanatha Temple respectively.

Many of the currently surviving temples contain inscriptions that most of them are built between 970 and 1030 CE. The first recorded mention of the Khajuraho temples is in the accounts of Abu Rihan al Biruni in AD 1022 and the Arab traveler Ibn Battuta in AD 1335.

Khajuraho is believed to be the religious capital of Chandelas. The group of temples was enclosed by a wall with 8 gates, with each gate flanked by 2 date/palm trees. Hence, it is called as Khajura-vahika meaning Date Bearing. Khajuraho is also mentioned as Jejakbhukti in historical records.

After the fall of Chandela Dynasty, Muslims invaded the region and the temples were hidden under forests from 13th to 18th century until they were rediscovered by T.S. Burt, a British surveyor in 1830.

The group of Khajuraho Temples is known its innate architecture and ornate sculptures. The temple is built out of finely grained stone of varying colors like pink, pale buff, brown and yellow and comprises mainly of sculptures, depicting the human body in sensuous postures.

Khajuraho is also one of the four holy sites of Lord Shiva, with the other three being Kashi, Kedarnath and Gaya. A famous author Shobita Punja mentions in her book that Khajuraho is the place where Lord Shiva got married.

Similar to all the Hindu temples, Khajuraho temples follow the grid geometrical design called vastu-purusha-mandala. Vastu means the dwelling structure, Purusha is the presiding deity and Mandala means circle. The structure layout of the temple is symmetrical and concentrically layered around the sanctum sanctorum called Garbagriha. The Shikara or spire of the temple rises above the Garbagriha.

The structure of both Hindu and Jain temples are the same, with an elevated substructure on top of which lies a heavily carved building known as Jangha, which is further covered by sculpted panels. Jangha is crowned by Shikharas or spires on top. In some literature, these dome-shaped Shikaras are considered similar to Kailash, the mythical abode of Gods.

Khajuraho dance festival is a one week long festivals of classical dances, set against the spectacular backdrop of Khajuraho temples. The festival is organized on Feb 20 – 26 every year. This cultural carnival highlights the richness of the various Indian classical dance styles such as Kathak, Bharathanatyam, Odissi, Kuchipudi, Manipuri and Kathakali. Performances of some of the best exponents in the field mark the uniqueness of the show. Recently, modern Indian dance has also been added. Dances are performed in an open-air auditorium, usually in front of the Chitragupta Temple dedicated to Surya (the Sun God) and the Vishvanatha Temple dedicated to Lord Shiva, belonging to the western group.

One can relish and admire the fine architecture and ornate sculptures at the Khajuraho temples, which depicts the innate craftsmanship of ancient Indian sculptors.

How to reach Khajuraho Temples

By Air: The nearest airport is Delhi International Airport. From Delhi, a connecting flight plies to the Khajuraho Airport which is 2 km from the Khajuraho City.

By Road: Khajuraho is well connected by roadway to major cities like Jhansi, Orchha, Katni, Chattarpur etc. Many kinds of buses are available that one can select from to reach Khajuraho from different parts of North India.