Kedarnath means ‘Lord of Kedar Khand' (mountain region). Located at a height of 3,133 metres (10,248 ft) above sea level, this temple is one of the most important pilgrimage sites for Hindus. The shrine is dedicated to Lord Shiva and lies near Mandakini River in Kedarnath, Uttarakhand (India). It is one of the 12 Jyotirlingas (Cosmic light) sites and 275 Paadal Petra Sthalams (revered by Tamil Saints) for Hindus. 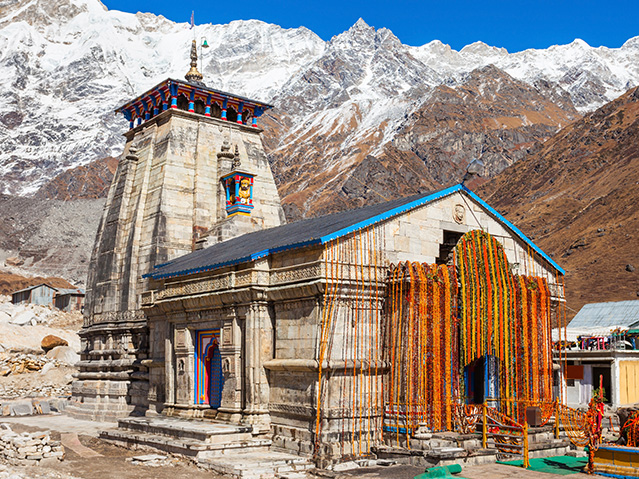 History and Legend of Kedarnath Temple

History says that the Pandavas (5 brothers from Mahabharata) wanted to seek salvation from their sins after war, when they killed their own kith and kin. They reached Himalaya to get the Dharshan (divine vision) of Lord Shiva to absolve their sins, however Lord Shiva hid from them. On seeing this, Dharma, the eldest of the five told to Lord Shiva that only after seeing him their sins will be washed away and the shrine where the Lord has hidden himself will be called Guptakashi.

They then travelled to Gaurikund in the Himalayan Valleys and undertook penance. But Lord Shiva avoided them and many a times took form of a bull. Pandavas realized Lord Shiva in the form of a bull. They followed the bull, but the animal immediately jumped into the surface, leaving the hump on the ground. The hump shaped portion was worshipped by Pandavas, who later built a temple. The remaining portions of Lord Shiva in the form of bull appeared at four places. Arms (Tungnath), face (Rudranath), belly (Madmaheshwar) and head (Kalpeshwar). Kedarnath and these four sites are treated as Panch Kedar.

Kedarnath temple is believed to have been built by the Pandavas and revived by Adi Sankaracharya (an ancient Indian Theologian and Philosopher) in the 8th century. Located in the Himalayan ranges, Kedarnath is one of the famous most sacred pilgrimage centers of the country. The temple is also one among the four Chota Char Dham, which means ‘small four abodes’. Devotees worship the Lord for health, longevity, remove disease, and increase spiritual strength and moksha. Walls inside the temple are delicately carved with images. Lord Shiva houses in the shrine in the form of Lingam, in an unusual pyramid shape.

Kedarnath Temple has a typical architectural structure with two distinct sections as any other Hindu Temple in the country. One is Garbagriha which houses the presiding deity and the other is Mandap which is a huge space to accommodate large numbers of pilgrims and devotees. The Temple is evenly engineered and constructed on a rectangular platform out of huge and heavy stone slabs. At the entrance of the Temple, an enormous statue of Nandi (Lord Shiva’s vehicle) is present.

The Holy Shrine consists of a conical shaped rock formation which is highly revered by the devotees as the Sadashiva form of Lord Shiva. It is believed to be a Swayambu, a self-manifested form of the Supreme Lord Shiva and is considered the highest of all 12 Jyotirlingas spread across India.

Kedarnath is considered the most important and special Shrines of Lord Shiva because of his presence in the shape of a pyramid. The deity presiding in the temple is more powerful and praying him is believed to fulfill all your desires and relieves you from sins and evil forces. This ancient shrine, which is devoted to Lord Shiva has an incomparable ambience, ideal for meditation and prayer and is hugely devoured by Shiva devotees.

How to reach Kedarnath Temple

By Helicopter: Helicopter service is operated from various places in Uttarkhand to easily reach Kedarnath. Some of the services include: Dehradun, Gauchar, Agustmuni, Phata, Sitapur.

By Road: Kedarnath is well connected via roadways to all major cities such as Chandigarh (387 km), Delhi (458 km), Nagpur (1421 km), Bangalore (2484 km) or Rishikesh (189 km). You can opt out train journey till Haridwar, Kotdwar or Dehradun or air route too if suitable till Dehradun.