Introduction about the Karni Mata Temple

The Karni Mata Temple is a sacred Hindu religious shrine located in Deshkote, which is 30 kms South of Bikaner in Rajasthan, India. This unusual shrine is dedicated to Goddess Karni, an Avatar of Goddess Durga. The temple is famous for harboring rats which are considered holy and supposedly the descendants of the deity. These rats, called Kabbas are deeply revered by devotees and people travel great distances to pay their respects to these creatures. The temple is a popular pilgrimage center which draws visitors from across the country and numerous tourists from all over the world. 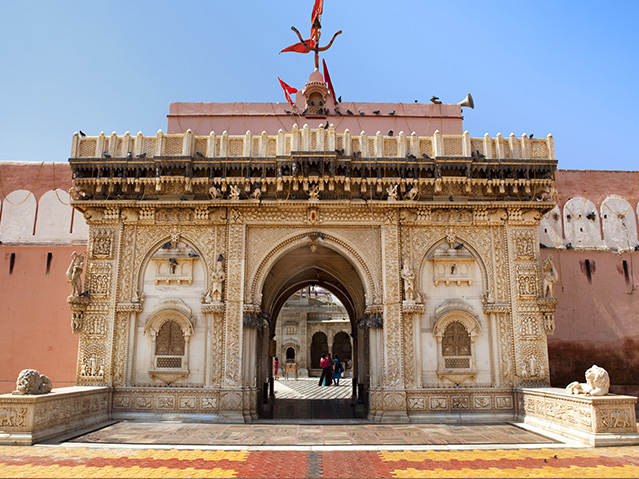 History of the Karni Mata Temple

The present structure is believed to have been built by Maharaja Ganga Singh of Bikaner sometime in the 15th century. The imposing façade of the shrine is entirely built of marble and inside the temple complex, a pair of silver doors open up to the main shrine of the Goddess. These stately doors are made of solid silver and were donated by Maharaja Gaj Singh, while on a visit to the temple.

According to legend, Karnis Mata’s stepson drowned in a pond while attempting to drink from it. The pleas of the Goddess to Yama, the God of death to revive him, were accepted and from then on, all male children in her lineage were reincarnated as rats. These rats are widely perceived to be humans in a state of transition, to be born again in their natural status. The food nibbled on by rats is considered holy and devotees eagerly devour the leftovers. In the event of the demise of any of the rats, it is replaced with one made of silver.

Significance of the Karni Mata Temple

The Image of the Goddess housed in the main shrine is depicted with several holy articles at her feet. Rats surround the entire periphery and Karni Mata is portrayed wielding a trishul (trident) in one of her hands. The Image is 75 cms in height, adorned with a crown and decorated with a garland of flowers. Images of her sisters flank the Goddess on either side. Almost 20,000 rats reside in the temple complex and these are well fed, protected and worshipped. The rats can be seen frolicking around and feeding from huge metal bowls of milk, sweets and grain. The presence of these rats is considered auspicious and enhances the religious fervor of the temple. It is also deemed highly propitious if a rat runs across one’s feet. White rats are rare, but several do frequent the premises and it is considered favorable if one gets a glimpse of these holy creatures.

The premises is wired and grilled to keep the rats safe and offers protection from birds of prey and other animals.

Architecture of the Karni Mata Temple

This temple is located at a distance of about 230 kilometres from Delhi and is well connected by roads. Starting from Delhi, people can drive to Haridwar (220 Kms), then to Rishikesh (25 Kms), subsequently to Rudraprayag (139 Kms) along the Badrinath route and finally to Guptakashi or Kalimath (50 Kms), through the Kedarnath road.