Kaila Devi Temple is a sacred temple of Goddess Kaila Devi and is regarded as one of the 9 Shakthi Peeths, the very special holy places of dwelling of Goddess Durga. This temple is dedicated to Goddess Kaila Devi, a mother Goddess, who is believed to be the guardian angel and the savior of humanity. This temple is located in the state of Rajasthan, on the banks of the river Kalisil amidst the Aravalli hill ranges, in the Kaila Devi village, Karauli district and is about 23 kilometres from the nearest town of Karauli. 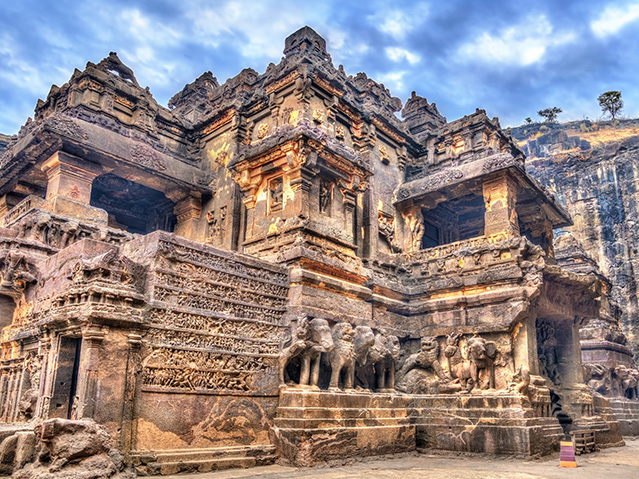 There is an interesting mythological story that associates Kaila Devi with Lord Krishna. As per this, the Devi is regarded as none other than Mahamaya, the divine child born to Nandagopa and Yasodha in the village of Gokul, who immediately took the place of Krishna in a curious turn of events. Lord Krishna was born in a prison in Mathura, as the 8th child of Vasudeva and Devaki, who were incarcerated by the cruel demon Kamsa, as he got rattled by a prophecy that he will be killed by his own sister Devaki’s 8th issue. New born baby Krishna was taken secretly by his father, as per his directive, across the flooded Yamuna at the dead of the night to the safety of the house of Nandagopa and Yasodha in village Gokul, where Yasodha herself had delivered a baby girl around the same time. Bowing to the divine command, Vasudeva left Krishna there, took with him the baby girl without anyone’s knowledge and returned to the prison. Misled into believing that it is this girl who is the much feared 8th child of Devaki, Kamsa tried to kill her instantly.

Lo and behold, the innocuous looking baby assumed the aggressive form of Mahamaya and declared to the bewildered Asura that she is the all-powerful Goddess and that the child born to kill Kamsa has already taken birth and is growing up in a safe place. She, then simply vanished from the scene, leaving Kamsa thoroughly scared and confused. Mythology regards Kaila Devi as an incarnation of this Mahamaya only.

History and architecture of the temple

The temple was built by the Rajput kings of the Karauli empire in the 18th century. Its foundation was laid in 1723 AD by Maharaja Gopal Singh Ji and the construction was completed in 1730. Apart from installing the main idol of Kaila Devi, the king also positioned the ancient image of Chamunda Devi, bringing it from Gagraun fort.

Kaila Devi Temple is a grand marble structure built with superior quality marbles, and is having an expansive courtyard with a checked flooring. In the sanctum, Goddesses Kaila Devi and Chamunda Devi are seen sitting together. The idol of Kaila Devi is larger and her head looks to be bending down slightly. Red flags are seen planted by the devotees at a particular place in the temple, as a form of praying to the presiding deity.

While Kaila Devi Temple is visited by a very large number of people right through the year, it is the Kaila Devi fair, held every year in the month of Chaitra (March-April) that draws as many as 20 lakh devotees not only from Rajasthan, but also from the states of Uttar Pradesh and Madhya Pradesh. While many used to come on foot to the temple, there are also staunch devotees who observe a tough ritual called Kanak-Dandotis, in which they cover a distance of 15 to 20 kilometres by doing successive prostrations and reaching the temple for worship. Jagran, consisting of songs and dance in praise of the deity is also held in the temple every night, which is very popular.