Shri Kaal Bhairav Nath Swami Temple is one of the important places of worship in the central Indian state of Madhya Pradesh. This temple is dedicated to the worship of Kaal Bhairav, who is an extremely aggressive form of Lord Shiva, the supreme God of destruction. While Bhairav shrines are found in or near many of the 12 Jyothilinga temples that are considered very sacred places of worship of Shiva, such shrines can be seen in many of the Shiva temples too. This temple of Kaal Bhairav is located in the Adegaon town in the Seoni district of the state. 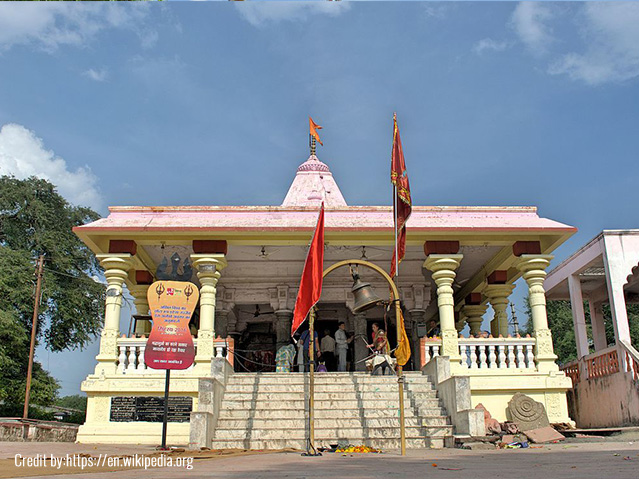 The legend on Lord Bhairav involves the trinity of supreme Gods, Brahma, Vishnu and Shiva. According to Shiv Maha Puran, once there was a conversation between Brahma and Vishnu as to who is the supreme entity of all. Brahma, being the creator of the universe, said that it was only he who is supreme and that everyone else should pray to him.

Lord Shiva, who happened to come to know of this, decided to put Brahma in place and show to the world who really is the ultimate reality. For this, he is said to have taken the fierce form of Lord Bhairav. This fearful Bhairav punished Brahma by plucking out one of his five heads and thus demonstrated Shiva’s immense powers. So, chastised, Brahma seems to have accepted the superiority of Shiva and bowed to him in reverence.

However, this act had an unexpected result too. Brahma was a noble Brahmin and by harming him, Shiva incurred a serious curse on himself. Hence, Brahma’s head or skull that Shiva removed, got stuck firmly to his hand and he was just unable to free his hand of it. So, the Bhairav Shiva had to roam around for 12 long years as a mendicant Bhikshadana, carrying the severed head of Brahma in his hand, and it is said that it was left to Lord Vishnu to intervene and relieve him of this curse. Hence, the Bhairav or the Kaal Bhairav form is normally seen carrying a separated head in one of his hands.

Bhairav is believed to be a wandering God and the controller of the various directions. The dog is his mount. There are said to be many Bhairavs and eight important manifestations among them are together known as Ashta Bhairavs. Lord Maha Swarna Kaal Bhairav or simply, Kaal Bhairav is considered as the supreme ruler of the Bhairavs. Kaal means time and hence, the scriptures regard Kaal Bhairav as the supreme Lord of universal time and eternity.

Kaal Bhairav is also said to be free of Maya, the illusion and hence is believed to live on crematoriums. Also, this ferocious Lord is said to be the protective deity of all the Shakthi Peeths and hence his temples or shrines can be seen in all such important places of Shakthi worship.

The image of Kaal Bhairav in the Adegaon temple reflects his fierce nature. He is seen with a frown in the face, angry eyes and sharp teeth like those of a tiger or beast, while flames themselves form his hair. He has four hands, which carry a noose, a trident, a drum and a frightening skull in them. He is also naked without any dress, and is adorned with a serpent around his neck and a garland of skulls in the body. He is also seen with his vehicle, the dog.

Kaal Bhairav is worshipped as a very important deity, especially in the rural belt of the states of Maharashtra, Karnataka and Tamil Nadu. He also remains the supreme God, the family deity and the caretaker of some communities in Karnataka.

People from all over the country and also from neighbouring Nepal visit the Adegaon Kaal Bhairav temple in large numbers and offer worship all-round the year. It is not only the Hindus, but also the Buddhists and Jains who come to this temple for offering prayers to the Lord.

Kaal Bhairav is believed to be the Lord who can be easily pleased with devotion and some little offerings. Hence the poor, the sick and those suffering many problems in life, flock to this temple seeking the Lord’s mercy for getting relief from their difficulties. Many also believe that his worship can lead them even towards Moksha, the ultimate liberation. The dog being his mount, the devotees also feed stray dogs with items like Halwa Puri, especially on Saturday mornings, to seek his favour.

Bhairav Ashtami or Kaal Bhairav Jayanthi is believed to be the day that the Lord appeared and is celebrated here with great religious fervor. This day falls on the eighth day of the waning fortnight in the month of Margashirsha (November-December). Shiv Rathri is also observed with piety here.

This temple is located at distances of 283 kms and 108 kms from the Madhya Pradesh capital of Bhopal and Jabalpur respectively, and can be reached by road from both the places.