Sri Harmandir Sahib or Sri Darbar Sahib, commonly called as the Golden Temple, is the central religious place of Sikhism. The temple is located in the city of Amritsar, Punjab. Amritsar literally means “the tank of nectar of immortality”. The temple acts as a symbol of brotherhood and equality. The Golden Temple invites both men and women to worship God equally in a serene and calm place. Over 1,00,000 people visit this holy shrine daily for worship, and also participate jointly in the free community kitchen and meal (Langar) regardless of any distinction, a tradition that is hallmark for all Sikh Gurdwaras (Temples). 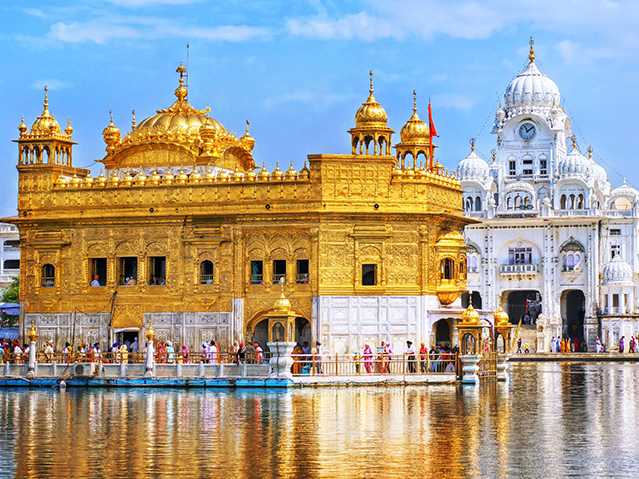 Sri Guru Granth Sahib (scripture of the Sikhs), after its compilation, was first installed at Sri Harimandir Sahib on August 16, 1604 A.D. A devout Sikh, Baba Budha Ji was appointed its first Head Priest.

The present-day Gurudwara was renovated in 1764 by Jassa Singh Ahluwalia, a prominent Sikh leader. In the early 19th century, Maharaja Ranjit Singh safeguarded Punjab from external attack and covered the upper floors of the Gurudwara with 750kg of gold, which bagged its name – “The Golden Temple”.

The Golden Temple or the Harmandir Sahib is the living symbol of the historical and spiritual traditions of Sikhism. Ever since its foundation, the temple and the surrounding tank or holy nectar, is an inspiration to the Sikh community. The temple has become a significant and unparalleled establishment as a pilgrimage place.

The temple houses the Adi Granth (the first book), which is a compilation of Sikh scriptures in the Gurmukhi (archaic version of the Punjabi language) script. The Adi Granth, also known as the Sri Guru Granth Sahib consists of 1430 pages of various devotional hymns describing God’s attributes. In October 1708, Guru Gobind Singh, the tenth Sikh master, declared the text to be his successor, thereby terminating the human line of Sikh Gurus and investing the text as the eleventh and final Guru. Sikhs firmly believe that it contains moral and religious guidance to all questions of past, present and future.

The Golden Temple has a unique Sikh architecture, which has a unique blend of Hindu and Muslim artistic styles. The temple has four entrances on four sides, welcoming people of any religion to worship at the shrine. The temple is built at a lower level than the surrounding ground level, which implies their egalitarianism and humility.

The Gurudwara is surrounded by Sarovar, the holy tank or Amrit (Nectar), which is fed by Ravi River. The interior of the Gurudwara consists of memorial plaques of many historical Sikh events and also engravings of Sikh soldiers who died fighting World War I & II.

All the gold and exquisite marble work was conducted under the benefaction of Hukam Singh Chimni and Emperor Ranjit Singh, Maharaja of the Sikh Empire of the Punjab. Sri Harmandir Sahib houses the world's largest free kitchen. According to the Croatian Times, it can serve free food for up to 100,000 - 300,000 people every day.

Diwali is also celebrated with high fervor, by illuminating the entire temple with Diyas or lamps and firing crackers. Every Sikh must visit the Golden Temple at least once in their lifetime, particularly on special days such as marriage, birthdays etc.

The Harmandir Sahib or the Golden Temple welcomes everyone irrespective of their religion, caste or creed to receive the eternal blessings of the God Almighty. The temple is surrounded by a religious pool known as the Amrit Sarovar which means Pool of Nectar. Devotees reach this pool by crossing the Guru’s Bridge, which denotes the journey of the soul after death.

Ringed by a marble walkway, the tank is believed to have healing powers, and pilgrims from all over the world come to bathe in its sacred waters. On visiting the Golden Temple, one receives the blessing of assured success in every venture and fulfillment of one’s dreams and goals.

How to Reach Golden Temple?

By Air:There are two main airports in Punjab – Raja Sani International airport and Guru Ram Das International Airport, 11 kms away from Amritsar. Raja Sani Airport has a chain of flights operating both within and outside the country. Various domestic flights such as Indian Airlines, Spice Jet etc. and international flights like Turkmenistan Airlines, Air India and others connect Punjab to important cities within India and also to the world.

By Rail:The nearest railway station is Amritsar, around 3 kms from the Golden Temple. There are few trains which have stoppages at Amritsar and they go further to other destinations. The trains that come to Amritsar are Shatabdi, Janshatabdi, and Garib Rath express. Besides these, many fast and superfast trains also have stoppage here.

By Road:Amritsar is well-connected to the nearby cities by road such as Grand Trunk Road passes by the city. Regular bus services are available to Delhi, Dalhousie, Ambala and many other cities. People can catch buses from Amritsar depot to reach their destination. People can move around Amritsar through auto and cycle rickshaws which are very cheap mode of local transport. Free bus service is also provided by Golden Temple Trust from railway station to Golden Temple.