Gangotri is the origin of the River Ganges and is one of the four pilgrimage sites in the Chota Char Dham. Amidst the surrounding of deodars and pines, the temple was originally built by the Nepalese general Amar Singh Thapa in the early 18th century. The temple is located at an altitude of 3415 metres above sea level in a small town, Gangotri in the heart of Uttarkashi district of Uttarakhand and is close to the Indo-Tibetan border. 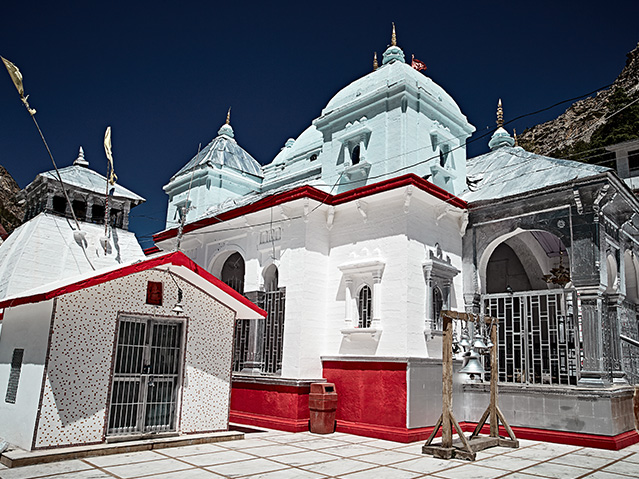 The origin of the holy river Ganges is at Gaumukh, set in the Gangotri glacier which can be accessed by a short 19km trek from Gangotri. According to Hindu mythology, it is believed that Gangotri is the spot where River Ganges descended from heaven when Lord Shiva released the Goddess from his locks. During the pilgrimage tour of the Chota Char Dham, Gangotri is often visited after Yamunotri.

The river is called by the name Bhagirathi and bags the name Ganga (Ganges) from Devprayag, when it reaches Alaknanda. The divine petite town Gangotri is a home to many temples, ashrams and small shrines.

According to the legend, King Sagara decided to perform an Ashwamedha Yagna (Horse sacrifice ritual performed by Kings) after slaying demons on Earth. The horse which had to be slayed was to be accompanied by his 60000 sons born to Queen Sumati and one son Asamanja born to his second queen Kesani, on an uninterrupted journey around the Earth.

Indra, the God of the Devas (Celestial beings) was afraid that he might lose his throne if this Yajna became a success and stole the horse and tied it to the ashram of Sage Kapil, who was then in deep meditation. The sons upon finding the horse in the Sage’s ashram were infuriated and stormed the ashram with rage. When the sage opened his eyes, he cursed all the 60,000 sons into perishing. Bhagiratha, the grandson of King Sagara is believed to have performed deep penance for centuries to please Goddess Ganga to wash away his ancestors’ sins and grant them Moksha or salvation.

The Gangotri temple is one of the Chota Char Dham pilgrimage sites and is built close to a pillar called “Bhagirath Shila”, where it is believed that King Bhagiratha worshipped Lord Shiva to bear the descent of River Ganga. The water collected here is considered an Amrit (Nectar) which is collected and taken to houses by pilgrims and devotees for holy purposes. It is also believed that the Pandavas performed the great “Deva Yagna” here, to atone the death of their kinsmen during the epic battle of Mahabharata.

A natural rock like formation in the shape of a Shiva Lingam can be seen during winters as the water regresses. This is believed to be the spot where Lord Shiva allowed Ganga to pass through his hair locks. Lanka Pul which is the highest river bridge in India is located at Gangotri and can be visited near Bhairon Ghat. Gangotri is also the starting point of some trekking routes such as Gaumukh, Gangotri glacier, Tapovan, Bhojwasa, Shivling peak etc.

The architecture of Gangotri temple is quite simple and follows the Katyuri style with five small shikhars (pinnacles) of 20 feet height. The holy shrine faces east so that the first rays of sun falls on it. The temple is constructed out of white marble stone and the sanctum sanctorum is built on a raised platform.

The inner sanctum has idols of Goddess Ganga as the main deity along Goddess Yamuna, Saraswati, Annapurna, Mahalakshmi and Bhagirath. The great sage Adi Sankaracharya also has an idol in the sanctum. The four small shrines are devoted to Lords Shiva, Ganesha, Hanuman and Bhagirathi.

As the legend of the temple signifies, the temple is highly visited by pilgrims to absolve their sins and attain Moksha or salvation. Taking a holy dip in the Holy River on the day of Ganga Dussehra while chanting the Ganga Stotra, would cleanse the human soul. Agni Purana and the Padma Purana also make a mention that bathing in Ganga on this day eliminates 10 types of sins from the human soul.

The immersion of the ashes of the departed souls in the River Ganga to release the soul from the cycles of death and rebirth is a widely followed custom amongst Hindus. The water collected from the Ganga River remains pure and devoid of slime and dust forever. For this purpose, the water is believed to be holy and is used during Homas and Yajnas (Fire rituals).

How to reach Gangotri Temple

By Air: The nearest airport to Gangotri is Jolly Grant Airport in Dehradun from where regular taxis and buses are available to the temple.

By Train: The nearest railway stations to Gangotri temple are Rishikesh and Haridwar. The frequency of trains to Haridwar is more from major cities in India as compared to Rishikesh. From Haridwar or Rishikesh, one can take buses or taxis to Gangotri.

By Road: The town of Gangotri is easily accessible from all major cities in Uttarakhand and Delhi NCR. Gangotri is well connected by road to places like Haridwar, Rishikesh, Dehradun, Roorkee, Chamba, Tehri, Barkot, Hanuman Chatti and Janki Chatti.