The Ganesha Temple in Morgaon is considered one of the very important temples of Lord Ganesha or Ganapathi. It is located in the state of Maharashtra. Here, the Lord is worshipped as Mayureshwar or Moreshwar. The significance of the temple lies in the fact that this is regarded as the most important among the eight highly sacred Ganesha temples located in the region, known as Ashtavinayak. 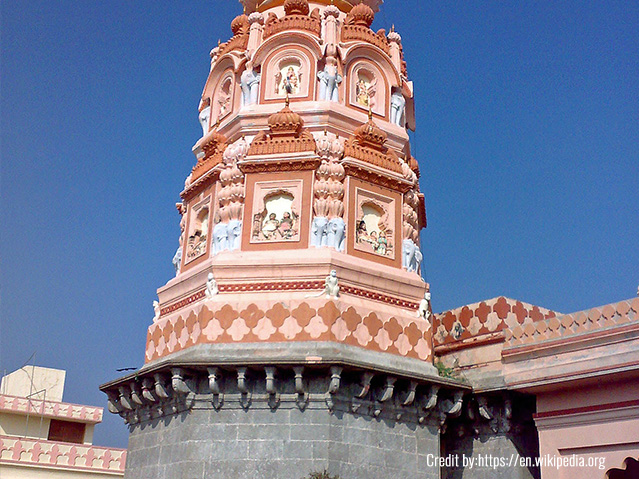 Ganapathyam is the sect that regards Ganesha as the supreme God and Morgaon remains as the prime centre of worship for the followers of the sect. Hence, this is known as Adhya Pitha. Also, it is at Morgaon that the holy pilgrimage of Ashtavinayak starts and that pilgrimage is regarded as complete only when the devotees visit this temple again at the end of the religious circuit.

Legend Ganesha Purana holds that Ganesha incarnated as Mayureshwara in order to destroy the demon Sindhu. He is said to have taken this Avatar as the son of Lord Shiva and mother Parvathi in the Treta Yuga. Here, he is regarded as white complexioned, possessing six arms and having the peacock as his mount.

Demon Sindhu was born to Chakrapani, the king of Mithila and his wife, Ugra, by the grace of Surya, the Sun God. Surya also blessed Sindhu with a bowl full of Amrut, the elixir of life, but with a condition that he can keep drinking from the bowl only as long as it is intact. Sindhu, in order to keep it safe, simply swallowed the bowl. With the immense strength that he got from the Amrut, he began harassing all the worlds. In the meantime, Parvathi began meditating on Ganesha for 12 long years at Lenyadri, the location of another Ashtavinayak temple. Happy with her devotion, Ganesha blessed her that he himself will be born as her son. Soon he came down at that place as promised. Ganesha, when young, is said to have hit an egg from a mango tree, from where a ‘mayur’, that is, a peacock came out. Ganesha made that peacock his mount, and hence, this peacock mounted Lord got the name, Mayureshwara. Peacock is also called as ‘mor’ in Marathi and there is a theory that as this place was full of peacocks, this came to be called as Morgaon and the presiding deity as Morehwar.

Then, Ganesha took on the might of demon Sindhu, routed his army, destroyed his general, then cut open Sindhu’s stomach, emptied the Amrut bowl, slayed the demon and thus, rid the worlds of his atrocities. While the Devas were extremely pleased with the happenings, the grateful Lord Brahma is said to have built this Morgaon temple for Ganesha and also married Siddhi and Buddhi to him. After completing his mission on earth, Lord Ganesha returned to his heavenly abode, after giving away his peacock mount to his brother, Subrahmanya.

History and Structure of the Temple

While there is no historical record about the antiquity of the temple, saint Morya Gosavi of the Ganapatya order is believed to have been strongly associated with it. This temple also enjoyed royal patronage from the Peshwa rulers of the Maratha empire during the 18th century. Ganesha remained as their family deity and they made generous donations in cash and kind to this temple and to the others here.

Morgaon Ganesha temple is a big one, surrounded by tall boundary walls and has entrances in all the four directions. These have images of Ganesha as he incarnated in all the four yugas, the eons. The main entrance is north facing and the courtyard inside is studded with two Deepmalas, the lamp posts. There is a big image of a mouse, Ganesha’s mount and also that of Nandi, Shiva’s mount, in front of the temple. In the sanctum, Ganesha as Mayureshwar is seated facing north, with three eyes and four arms, three of which hold the noose, an elephant goad and the sweet Modaka, and the fourth rests on his knee. The hood of a serpent provides him the canopy. The sindhoor covered image is flanked by his consorts, Riddhi and Siddhi, or Siddhi or Buddhi.

Sabha Mantap, the hall in front, has images of many Gods and deities.

Devotees in very large numbers visit this temple throughout the year for worshipping the Lord, where ceremonial prayers are offered to him at 7 in the morning, 12 noon and at 8 in the night. Ganesh Jayanthi on the Magha Shukla Chaturthi day and Ganesh Chaturthi on the Bhadrapada Shukla Chaturthi day are celebrated with great piety here, while Vijayadasami is also observed with enthusiasm.

How to reach Morgaon Ganesha Temple?

Morgaon is situated in the Pune district of Maharashtra at a distance of about 80 kms from Pune city and 216 kms from the Mumbai metropolis. People can reach these cities easily by air, rail or road and then travel to Morgaon from there by road.