Introduction about the Dilwara Temples

The renowned Jain Dilwara temples are located close by to the scenic hill station of Mount Abu in the Northern Indian state of Rajasthan. The construction of these temples was started by Vastapul Tejpal, sometime between the 11th and 13th centuries and built in the Nagara Style of architecture. Numbering five in all, these magnificent temples are made entirely of marble. The Dilwara temples are considered to be the one of the most revered Jain pilgrimage sites in the world. These sacred shrines are built in a grand manner, but still convey the attributes of Jainism like honesty and austerity. Nestled in a range of lush green forested hills, the temples are encircled by a high wall. A splendid entrance way reflects the brilliance of its design and welcomes visitors to its premises. The state of Rajasthan is replete with several Jain temples, but this particular complex of temples is a true masterpiece of construction. The elaborately decorated ceilings, doorways, pillars and panels are so intricately carved that they are truly a sight to behold. This majestic complex of temples attracts numerous visitors throughout the year from within the country and foreign shores. 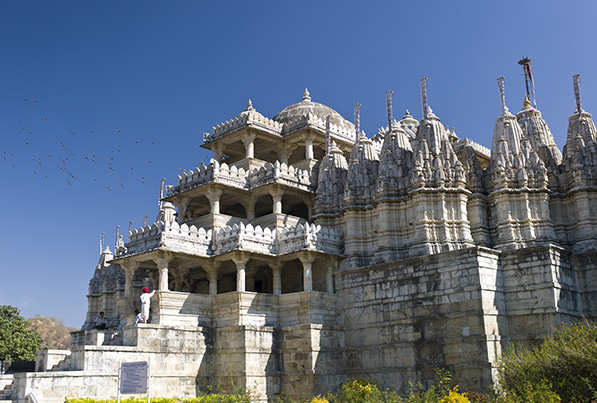 The five temples are unique and distinctive, with each in a class by itself. These temples are named after the village in which they are located and a detailed account of each is given below.

Carved entirely out of white marble, this temple is dedicated to Lord Rishaba. It was built in 1031 A.D by Vimal Shah, a minister during the reign of the Chalukya king Bhima I of Gujarat. This spectacular shrine is situated in the middle of a spacious courtyard surrounded by a corridor. Several smaller shrines within the premises house Idols of the Tirthankaras. The corridors, pillars, arches and mandaps of the temple feature intricate carvings which are strikingly beautiful. The ceilings are replete with carvings depicting Jain mythological images and several engraved designs of various flowers. The elaborately carved nine rectangular ceilings of the Navchowki are supported by ornate pillars. The idol of Adinath (Lord Rishabdev) is installed in the Gudh Mandap and Aarti is performed here for the deity.

The temple also features a Hathishala (Elephant courtyard), which was built in 1147 to 1149 A.D. This is adorned with several intricate sculptures of Elephants depicted in rows.

Built in 1230 A.D by the Porwal brothers, this spectacular temple is dedicated to Lord Neminath. The Luna Vasahi temple was built to commemorate the memory of their late brother and the design is similar to that of the Vimal Vashi temple. The spacious main hall is topped with a central dome with a huge decorative pendant hanging from the ceiling. Located within the hall are the 72 figures of Tirthankaras, which are depicted in a seated position and arranged in a circular fashion. Below this are the 360 small figures of Jain Monks also arranged in a circular band. Ten beautifully carved and polished marble images of Elephants are also found in the Hathishala.

Elaborate and beautifully carved marble stone work adorns the Navchowki and the nine ceilings are truly a sight to behold. A black marble Idol of the 22nd Tirthankar, Neminatha is installed in the Gudh mandap, which also features a black stone pillar on the left side.

Built by Bhima Shah, a minister in the royal court of Ahmedabad, the Pittalhar temple is an impressive structure. The Idol of Lord Adinath installed here is an alloy of five different metals, with brass being the main element. Hence the temple takes the name Pittalhar, which means brass. A Garbagriha, Gudh Mandap and Navchowki are the other predominant structures in the shrine. Some portions of the temple were built in 1474 and 1490 A.D, after which construction was abandoned due to some inexplicable reasons.

Built by Mandlik and his family in 1458-1459, this majestic temple is dedicated to Lord Parshvanath. This three-storied structure is the tallest among the complex of temples found in Dilwara, with all four faces of the Sanctum on the ground floor featuring four large mandaps. Beautiful sculptures depicting Dipkals in gray sandstone adorn the outer walls of the Sanctum. Several other decorative sculptures portrayed here rival those of the Khaujuraho and Konark temples in sheer beauty and grace.

This relatively small structure was constructed in 1582. Dedicated to Lord Mahavira, this shrine is a masterpiece of architecture and its walls are adorned with beautiful carvings. The upper walls of the porch feature ancient images painted by artists from Sirohi in the year 1764.

These architectural marvels of the Jain community have undergone extensive repairs periodically. Ravaged and plundered by Muslim invaders on many occasions, these temples were restored and repaired by Hindu philanthropists several times. The indomitable spirit shown by these individuals has ensured the survival of these sacred temples to this day and hopefully they will remain for posterity as a tribute to the followers of the Jain community.

Location – How to reach the Dilwara Temples

The Dilwara temples are located close to Mount Abu, the only hill station in Rajasthan. It is accessible by various modes of transport.

By Air: The nearest Airport to Mount Abu is in Udaipur, about 185 km away. Taxis and buses are available from here to take one to the Dilwara temples.

By Train: The closest Railway Station is Abu Road, about 29 km away.

By Bus: The Dilwara temples are accessible by bus from most neighboring towns and cities.