The Chhatarpur temple located in New Delhi is dedicated to Goddess Katyayini. She is an Avatar of Goddess Durga who is considered the epitome of Shakti (Power). The temple is a sprawling structure built on a large swathe of land and the premises houses several other temples dedicated to Shiva, Vishnu, Lakshmi and Ganesh. Currently it holds the status of the second largest temple complex in India after the Akshardam Temple which is quite a recent structure. The temple is made of exquisite white marble and the premises abound with beautifully manicured lawns and gardens. This beautiful temple is not only a religious and spiritual center, but also a marvel of construction. It is no wonder that people from all destinations flock here, not only to offer prayers but also to take in its breathtaking beauty. 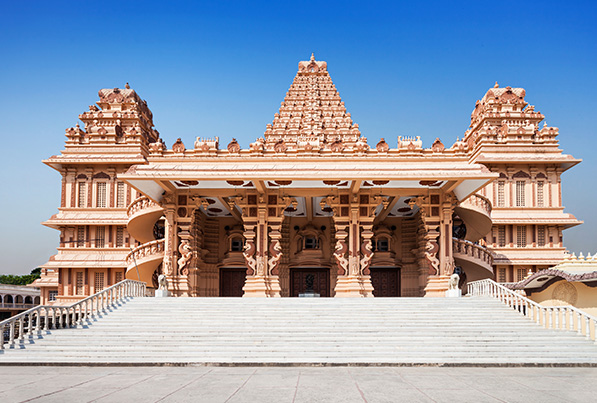 The temple is of reccent origin and established in the year 1974, by Baba Sant Nagpal Ji, who attained heavenly bliss in 1998. His Samadhi shrine lies for posterity in the premises of the Shiv-Gauri Nageshwar Mandir located within the temple complex.

It is said that Maa Durga incarnated here as Katyayani with the purpose of slaying the evil demon Mahishasur, who wreaked havoc upon the world with his evil deeds. The holy trinity of Hindu Gods, Shiva, Vishnu and Brahma combined their forces to create this wonderful Goddess and endowed her with awesome powers. Without even the slightest hesitation, she went about her task with zeal and slew the demon effortlessly, thus acquiring the moniker Mahishasuramardhini. She is often depicted with flowing hair, golden complexion and a fierce expression, which is most commonly associated with Durga Puja.

The temple is spread over a vast expanse of 60 acres and the complex houses over 20 small and large shrines, divided in three separate sections. The main deity is Goddess Katyayani as Goddess Durga. There is a side shrine dedicated to the Devi which opens only during the bi-annual Navratri season. One room is considered as a living room with tables and chairs made of silver and another room, known as the bed room, where the bed, dressing table and table are carved in silver. There is a large Satsang hall where people congregate and meet, with religious discourses and bhajans being held to celebrate the religious fervor. A unique feature within the premises is the presence of an old tree where devotees tie holy threads and pray to the Devi to fulfill their wishes. One more shrine of Goddess Durga lies above the shrines dedicated to Radha Krishna and Ganesh. This is open from morning to evening with hordes of people coming just to have a glimpse of the deity.

This temple was till recently the largest in the world, but of late the Akshardam temple is said to have eclipsed it in sheer size. It is built in both South and North Indian style of temple architecture and considered a sheer marvel of construction. It is a modern design with extensive use of marble and intricately carved jali work. People from all over the world come here not just to pray, but also take in, its magnificent façade and admire its sheer beauty.

Even though the temple is steeped in religious and spiritual fervor throughout the year, celebrating many religious and spiritual occasions, it is famed for the Navratas and Durga Puja celebrations. During this nine day festival, Pujas are conducted 24 hours a day and anybody can participate in the proceedings. The entire temple complex literally comes alive during this period and people rejoice in the festivities. The shrine is said to draw a humongous crowd of almost 10 million people during this festive season.

All the Pujas performed here adhere to strict Hindu Vedic guidelines and conducted by learned Pandits/Pujaris.

Benefits or Blessings of the primary deity- Chattarpur Mandir

It is believed that all those who visit the Chattarpur Mandir are blessed by the benevolence of the Devi and their desires fulfilled. She strikes fear in the mind of evil doers and destroys the evil which lurks in our material and spiritual being. The Goddess is said to favor all those who come to her with a clean mind, conferring peace and prosperity on her devotees.

Location – How to reach Chattarpur Mandir

The Chattarpur Mandir is located in a suburb of Delhi, about 4 km from the Qutub Minar. The shrine is easily accessible and several modes of transport are available for the visitors convenience.

By Air: New Delhi, being the capital city of India, is one of the busiest Airports in the world and well linked to almost all domestic and International terminals.

By Train: New Delhi railway station is about 2 km from the Chattarpur Temple. Trains ply frequently to almost all destinations in India.

By Road: New Delhi is well linked by bus service to neighboring towns and villages and many cities in India.

Local Transport: One can reach the Chattarpur Temple by taxis, buses and three wheelers from almost anywhere in the city.