The Birla Mandir is located in the city of Jaipur in the Northern Indian state of Rajasthan. The Temple is dedicated to Lord Vishnu, the preserver and protector of the Universe and his consort Lakshmi, the Goddess of wealth. The temple is a major pilgrimage center for Hindus and is one among the many shrines constructed by the prominent Birla family in India. It is located at the base of the Moti Dungari Hill in Rajasthan and is situated on a higher ground. The shrine is also referred to as the Laxmi Narayan Temple and forms one of the major attractions of Jaipur. The temple is strikingly beautiful after dusk when it is brightly lit, with the lights illuminating the shrine twinkling in the distance. The shrine attracts people and devotees from all four corners of the Globe and is a popular tourist destination. 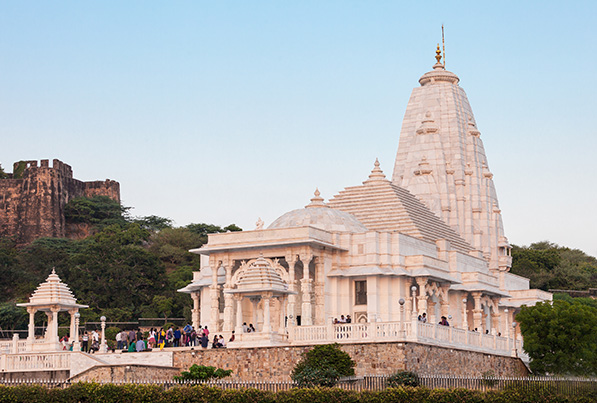 History of the Birla Temple Jaipur

The temple was built over a time span of over 8 years-from 1977 till 1985. The consecration ceremony of the temple took place on 22nd February 1985, after which the shrine was opened for the public. The land, the temple is built on, was given by the Maharaja to the Birlas for a token amount of just one rupee. This popular shrine is famous and visited by millions of devotees every year.

Significance of the Birla Temple Jaipur

The finest quality white marble was used in the construction of the temple and the structure is a visual treat to witness after sunset, when it is well lit up. The three huge Domes of the temple which are believed to represent the three major religions followed in India are truly a sight to behold. As you enter the temple, the sheer magnificence of the white marble dazzles the eyes and visitors are awestruck by the beauty of the structure. The beautiful stained glass windows are replete with scenes from Hindu scriptures. Lord Ganesha, the remover of obstacles is portrayed above the lintel, with many other images of the Hindu faith also depicted inside the temple. The primary deities of Lakshmi and Narayan are strikingly beautiful, made from one single piece of marble. The exterior walls of the temple depict images of great historical personages and figures from all faiths. Images of Socrates, Zarathustra, Christ, Buddha and Confucius are also depicted, indicating the unbiased nature of the shrine.

Architecture of the Birla Temple Jaipur

This magnificent temple is a modern architectural marvel and represents the expertise of the builders. It is surrounded by carefully manicured lush green gardens with many different varieties of flowers and plants. The tastefully carved exteriors of the temple abound with sculptures based on mythological themes and visitors can spend several hours just reveling in the craftsmanship of this impressive structure.

The temple celebrates the birth of Lord Krishna and the festival of Diwali with great pomp and splendor. Goodwill and cheer abound in great measure during the festive season with the entire complex being decked up for these auspicious occasions. People from all over the world are drawn in great numbers to its precincts during these festivals and everyone takes part in the proceedings with great enthusiasm.

Benefits or Blessings of the primary deity- Birla Temple Jaipur

Lord Vishnu is the giver of wealth and Goddess Lakshmi is the controller of these riches. Hence, devotees visit the temple to gain the blessings of these deities for health, wealth and prosperity. People also seek the benevolence of other deities in the temple precincts, since it hosts an abundance of several other shrines. People of all faiths and religions, irrespective of caste or creed, throng the temple to worship and seek God’s protection with equal fervor.

Location – How to reach the Birla Temple Jaipur

Built beneath the Moti Dungri Fort in Jaipur, the vicinity of the famous Birla temple is surrounded by greenery. The entire area is serene and calm, adding to the beauty of the shrine. Jaipur is easily accessible by Air, Rail and Bus and a major tourist attraction, with people from all over the world visiting the city every year.

By Train: the Railway Station is located a short distance away from the temple. From the railway station, you can take a bus, an auto rickshaw or hire a taxi and reach the temple.

Local Transport: Taxis, buses and auto rickshaws are available for the convenience of visitors.