The Bharat Mata temples embody the spirit of a united country and the national personification of India as a Mother Goddess. The deity is an amalgam of Indian pride and culture, while also closely symbolizing the essence of Goddess Durga. She is usually depicted as a woman clad in a saffron sari and holding the National Flag, with a lion in tow. In all, there are three Bharat Mata temples located in Varanasi, Haridwar and Kolkata. People worship the deity not only as a religious and spiritual entity, but also venerate her with a patriotic fervor. 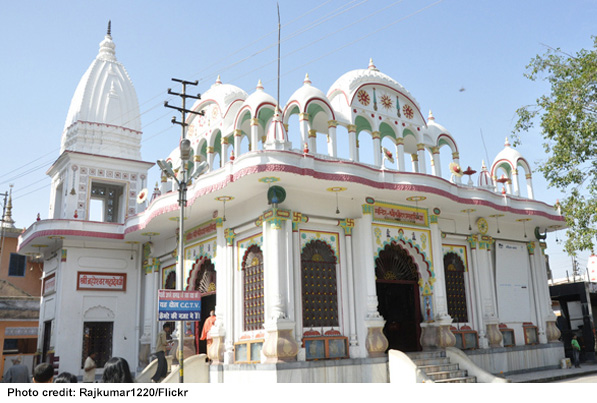 The Bharat Mata Temple in Varanasi is located in the Mahatma Gandhi Kashi Vidyapeeth campus. There is a beautiful marble Idol of Bharat Mata along with a marble relief map of India within the temple premises. The shrine was a gift from the Indian nationalists, Shiv Prasad Gupta and Durga Prasad Khatri and inaugurated by Mahatma Gandhi in 1936. It echoes Gandhi’s words of being a shrine for people of all castes, creeds and religions including Harijans, with the intent of promoting religious unity, peace and harmony in the country.

The Temple in Haridwar is located on the banks of the holy Ganges and has 8 storeys-about 180 feet tall. It was founded by Swami Satyamitranand Giri and inaugurated by Smt Indira Gandhi in 1983. The shrine is dedicated to religious deities, mythological legends, freedom fighters and leaders.

Located in Michael Nagar on Jessore road, the Bharat Mata temple is barely 2 kms away from the Kolkata Airport. The deity here is depicted as the Goddess ‘Jagattarini Durga’. The temple was inaugurated on October 19, 2015 by Shri Keshari Nath Tripathi, the Governor of West Bengal. The temple was built to mark the 140th Anniversary of ‘Vande Mataram’, the Hymn dedicated to the Mother Land.

The Bharat Mata temples were built to infuse the spirit of patriotism and Hindu nationalism among the Indian populace. It symbolizes the struggle for freedom from foreign invaders and kindled the spirit of rebellion among the natives. It also signifies the patriotic duty of every Indian to participate in the Nationalist struggle to defend the Motherland. Even though certain sects of religious minorities objected to it being associated with Hinduism, the objective is to bind all the citizens of the country and unite as one single entity.

The Bharat Mata temples are a reflection of contemporary Indian architecture prevailing in the mid-20th century. The temples feature several unique characteristics and are made with great attention to detail, since they signify not only religious but also nationalist pride for the nation.

The Bharat Mata temples are constructed to imbue the spirit of Nationalist pride among Indians. The intent is to bind the people of the country into one single entity, irrespective of caste, creed or religion and foster a feeling of goodwill among all communities.

To Varanasi: The Varanasi Airport is at Babatpur, approximately 18 kilometers away from Varanasi.

The Bharat Mata Temple in Varanasi is 1.5 kilometers south of Varanasi Railway Station and one can access the shrine by buses or taxis from the station.

To Haridwar: The nearest Airport to Haridwar is located in Dehradun, approximately 20 kilometers away.

The Station in Haridwar is well linked to the rest of the country with regular trains plying to and from various cities of the country.

Buses, taxis and three wheelers are available to take one to the Bharat Mata Temple.

To Kolkata: The Bharat Mata temple is located in Michael Nagar on Jessore Road, approximately 2 km away from the Kolkata Airport.

Kolkata is a metropolitan city and well linked to the rest of the country by rail.

Buses, taxis and three wheelers are available to take one to the Bharat Mata Temple.