Sloka To Get Rid Of Rahu Afflictions

Mythology considers Rahu as the severed head of a snake, whose tail is Ketu. He is also held as the son of an Asura, the demon. Rahu doesn’t really have a physical existence and remains actually as the northern lunar node, the northern point of intersection of the orbits of the Sun and the Moon. Hence he is regarded as a Chaya Graha, the shadow planet. His colour is black.

Rahu is a malefic planet, who signifies anger, anxiety and sudden happenings. It is said that he can ruin things, stop ventures from fructifying right at the very last moment and thus cause frustration. However, it is still believed that though the effects of Rahu will be painful, they may do ultimate good. Rahu also represents foreign connections like foreign countries, citizens and travel, paternal ancestors, technical trades, fulfillment of worldly desires, fame, extremes, unlawful activities, anti-social elements and the underworld. Rahu remains 180 degrees away from Ketu and diametrically opposite to him. He takes 1 ½ years to pass through a sign and 18 years to take a complete round of the 12 zodiac signs. Rahu and Ketu are believed to move in directions opposite to that of the other planets

Sloka To Get Rid Of Rahu Afflictions

I always pray to Lord Rahu, who is in the shape of a serpent, who has a crown on his head, who is the son of Simhika, who has a fearsome face, who is the donor of the fearless, who is well known as Rahu, who has is holding a shield, Trident, knife and boon in his four hands, who is dressed in black color garments and ornaments, who has smeared black sandals on his body, who is studded with gems called Ratinam, who wears an amazing crown who is mounted on a black Lion, and who is revolving Mount Meru anticlockwise. 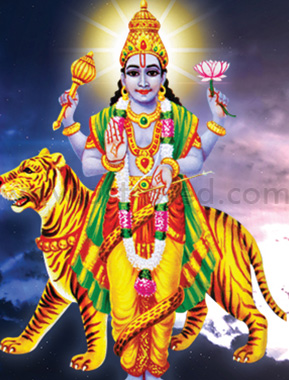