Shani is perhaps the most feared of the Navagrahas, the nine planets. He is regarded as a servant in Vedic Astrology. He is believed to be the son of Surya and his spouse, Chaya, the shadow. The ring surrounding the planet on all sides is its most notable feature and this indicates Shani ruling obstacles and restrictions. His colour is blue and direction, west.

Shani represents vocation and hence is referred to as Udhyoga Karaka. He denotes hard work, blue collar jobs, aged people, iron and steel industry, drainage works and sorrow. He also represents finality and hence is said to govern death and insurmountable time. He is a powerful planet who can bestow power, prestige and fame when well placed, but can nearly destroy a person, when he is otherwise.

Shani is the slowest moving of all planets who takes 2 ½ years to pass through a zodiac sign and hence, as many as 30 years for going round the zodiac. The period of 7 ½ years that Shani takes to pass through a person’s Janmarasi, the sign of birth along with the preceding and the succeeding signs, is known as Sade Sati and is generally considered to be a trying period.

I meditate on Saturn whose complexion is blue as a peacock’s neck, who is very attractive, who is like the Nelotpala flower, who is lean, who has big ears, whose hair is long, whose eyes are large, who has a short stomach and who has a daunting look. You are the donor of fame and luck, who is the son of Surya, who saves devotees, who creates the deluge and who has wise eyes. Oh Lord Shani, if you are happy with the devotees you will bestow them with a kingdom. If you are angry with them you withdraw the same that very moment. Devas, Asuras, Humans, Siddhas, and Scholars, whoever it may be, if you see they get distressed. I beg you Lord Shani, to save us without harassing us much.

Whoever chants this mantra, Saturn will never harass them. 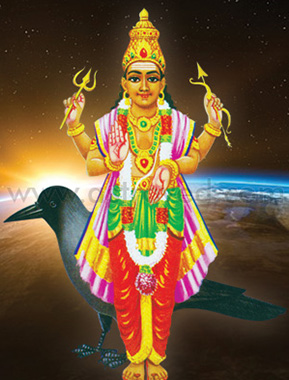