Chandra or Moon is the queen planet. It is calm and cold. The Moon governs the mind, feelings and emotions, and shapes the personality of an individual. An afflicted Moon can essentially affect peace of mind.

This Soundarya Lahari sloka can help to ward off the effects of Chandra Graha afflictions.

Chandra (Moon) is a planet which signifies growth, desires and passion etc., This Sloka (Hymn) describes about Chandra (Moon)

I prostrate to the Moon who is as white as yogurt, the conch shell and snow, who is born from Ksheerasagar (ocean of milk) and who decorates the head of Lord Shiva as an Ornament.

This is a sloka (hymn) of Soundarya Lahari (Waves of Beauty) written by Shri Adi Shankracharya. The verses of the sloka eulogize the beauty, grace and munificence of Goddess Parvati, the consort of Lord Shiva.

OhDevi! Lord Shiva who created the entire world is empowered to create only if He is enjoined with you. Without you, Lord Shiva is Powerless to move even a small thing. The Trimurtis, Shiva, Vishnu, Brahma and others also worship you. In that case, without the good effects of yester deeds how can one worship you?

Recitation of these slokas (hymns) can increase the positive results of Chandra the Moon. One can attain growth, and obstacles can also be removed. 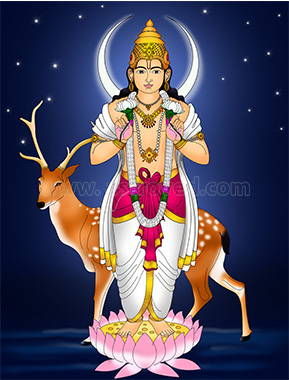 Participate in Moon Pooja to get balanced emotions and strengthen relationship.

Participate in Moon Fire Lab to promote love, success, happiness and glory in your life.

Keep Moon yantra with you to balance emotions and lead a peaceful life.