Sloka To Get Rid Of Surya Graha Afflictions

Surya or the Sun is the centre of the Solar system. He is the king planet, who rules all other planets and remains as their source of light. He is also called Adithya, the first born, as he is believed to be one of the earliest inhabitants of the universe. Surya is actually a self-luminary star. However, Vedic Astrology treats Sun also as one of the Nava Grahas, the nine planets that strongly impact the lives of the people and holds that the study of his position and movements, along with that of the other planets can reveal the past, present and future of any individual

Surya is a royal entity who is hot and aggressive. Appropriately, his colour is red and direction, east. He denotes the high and the mighty, will-power and the soul. He is also known as Pitru Karaka, as he represents the father and paternal ancestors. He stays for a month in each sign and takes a year to transit all the 12 zodiac signs. It is the Sun’s entry into the different signs and constellations that marks the change of seasons and also the celebration of festivals like Makara Shankaranthi and Baishaki.

Surya Graha afflictions can impede self-confidence and weaken a person on many counts. This powerful sloka can help to ward off the ill effects.

Surya or Sun is a Star which provides energy to all the planets and organisms living on earth. This sloka describes about Surya the Sun.

Oh Lord Surya! You have red complexion as vermillion, you have a beautiful place, and you wear ornaments made of Gold and Gems. I bow to you. Your eyes are as bright as a Lotus and you hold a lotus flower in your hand. You are in the form of Brahma, Indira, Narayan and Sankaran. I bow to you!

Chant this Sloka (hymn) on Sunday. Recitation of this sloka (hymn) can increase positive results of the Sun, and Surya Graha afflictions can go away like melting snow in the sun. 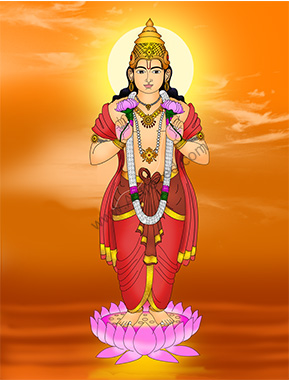 Participate in Sun Fire Lab to bring prosperity in your life and make your dreams come true.

Keep Sun yantra with you to progress in your career.