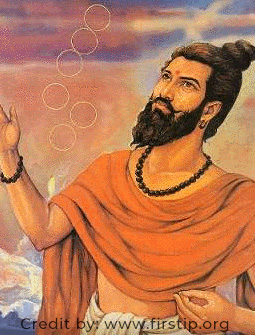 When the entire people credit the Western World for modern physics and its development, it is India’s own scientist “Sage Kanad”, otherwise known as “Acharya Kanad”, who should be highly revered and credited. He discovered the atomic structure, atomic theory, and even sub-atomic particles some 2600 years before. Kanad in Sanskrit denotes the smallest particle. He is revered as the “Father of Atomic Theory”. He has rendered Kanada Sutras, which are the Aphorisms of Kanada, which is considered as one of the greatest works in the field of physics. He is not only revered in Hinduism but also in Jainism and Buddhism, where his concepts are highly praised.

He was believed to have born in the year 600 BC or 800 BC in Gujarat, India. His father was a philosopher Ulka. His birth name was Kashyap. As a child, he always accompanied his father and observed many things. But despite of all those things around him, his interest was always on the smallest things. He was able to look beyond the general concepts which were underlying in the universe.

When he was able to conceptualize the idea of the smallest particle, he noted down his ideas and was able to explain it to people. Many people also with great reverence call him Acharya Kanad.

When Acharya Kanad was young, he always admired the grain of rice. It was the tradition of the early Hindu family, to scatter grains of rice along the streets, for the people to follow it as a ritual. The young boy was looking at the ant, which was eating the rice. He was fascinated by the idea that a small piece of rice could become food for a small creature like an ant, but it needs a lot of grains, collected together to make a complete meal for a person, which could satiate his hunger.

The idea of looking deep and beyond was highly fascinating, and he started to look deep into the rice particle, which suggested to him the concept of “Anu”, the smallest particle.

The theory of “Anu”, the atom was postulated even before Dalton’s theory. But, may people do not consider it, as it is not highly empirical. He was able to bring a theory on the creation and existence of the universe. He was able to parallelly bring mystical realities of “Atma”, along with “atom”, which is bound by energy. Every “Atma” wants moksha, which is the ulterior goal of every soul born in this world.

Thus, great philosophers and Saints like Sage Kanad were parallelly able to travel on both philosophy and spirituality. He has made several people think about science and was a great inspiration for several other philosophers and thinkers.