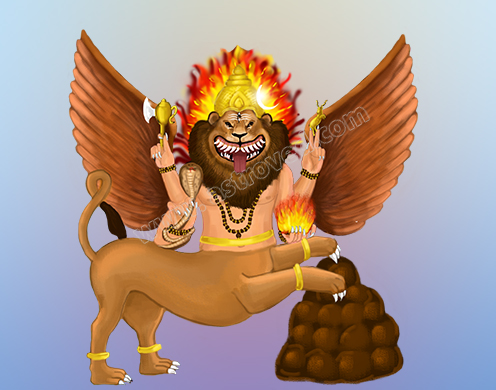 Lord Sarabeshwara is a significant incarnation of Lord Shiva, who incarnated to calm down the wrath of the ferocious Lord Narasimha after slaying down the demon Hiranyakashipu.

Sarabha is a mythological animal, or a beast or simply, a mythical being, which is considered to be a combination of a lion and a bird, in appearance. Sarabeshwara is Sarabha-Eshwara and denotes Lord Shiva, who took the form of this peculiar being, Sarabha. It is generally believed that he took this ferocious form to pacify the Narasimha Avatar of Lord Vishnu.

Various mythological accounts present different pictures of Sarabha, but all seem to be unanimous about him being unique in form and features. Shiva Purana describes him as having a thousand arms, lion-headed with matted hair, and having wings like a bird and eight feet. Other Puranas portray the being variously, as dark in complexion, having a huge body, two heads, long faces, two wings, eight legs with sharp claws, and a loud, shrill voice. He is said to be mightier than an elephant and a lion and is capable of jumping so far that he can even clear a wide valley in a single leap. Subsequent texts too have continued their portrayal of Sarabha, some terming him as an eight-legged deer. Whatever be the appearance, Sarabha is regarded very mighty and extremely ferocious.

There are plenty of legends associated with Sarabeshwara. While there is an agreement among many of these that it is Lord Shiva who incarnated as Sarabeshwara, many give differing versions about the exploits of Sarabha. As per a popular legend, Lord Shiva’s incarnation as Sarabeshwara is linked to Lord Vishnu’s incarnation as Narasimha. According to this version, Narasimha, the man-lion killed the demon Hiranyakashipu and ended his atrocities; but even after the completion of his mission, his anger did not subside. Narasimha’s ferocity continued unabated, and even the Gods began fearing his fury. Ultimately, they pleaded with Shiva to handle the difficult situation. Shiva first tried to calm the Vishnu Avatar through his own terrifying form Veerabhadra, but it was of no avail. Then Shiva himself took the aggressive form of Sarabha, the beast, which appeared to be a deadly mix of a lion, a bird, and a human, attacked Narasimha with all his might, bound him ultimately and thus quelled his rage. Continuing with his assault, Shiva also dismembered the various limbs of Narasimha and distributed many of them. While the torso became the Kapalika form, Shiva adorned himself with the lion head and the skin. With his Avatar thus brought to an end, Lord Vishnu prayed and thanked Lord Shiva, assumed his original form and returned to his heavenly abode.

However, the portrayal of Sarabeshwara as above is essentially Shaivite in nature. However, Sarabha saga seems to go much wider.

Sarabha also finds mention in Buddhist texts, as he appears in the Jataka Tales, the Buddhist mythological stories, where he is portrayed as an earlier incarnation of Lord Buddha.

However, in Hinduism itself, the Vaishnava sect views Sarabha in a very different light. Here the term Sarabha is said to mean ‘the lion-killing animal’ and is referred to in the famous Vishnu Sahasranama, which sings the praise of the thousand names of Lord Vishnu. Hence, Sarabha is taken to be a term in praise of Lord Vishnu. The Vaishnava version also disputes the claim of Sarabeshwara getting the better of Narasimha. There is also another story of Vishnu assuming the massive form of Gandaberunda, the bird-animal and subduing Sarabeshwara Shiva.

Sarabeshwara is a ruthless vanquisher of evil, and a great protector and motivator. He would bestow the devotees with fearlessness and strength to face the battles of life. His worship can remove all the negative forces and ensure success for the deserving. The Lord has control over nature too and can protect the land and its people from natural calamities. Praying to him can also eliminate obstacles in marriage, bestow progeny, clear debts and neutralize the evil effects of black magic. Sarabeshwara can be worshipped in many temples, the Kampaheswarar temple at Thirubhuvanam, near Kumbakonam being the most famous of them.

It is believed that Sarabeshwara Avatar was taken on Vaishaka Purnima, the Full Moon day in the month of Vaishak (April-May), which is observed as Sarabha Jayanthi, the birth anniversary of the Lord. This day is dedicated to the worship of Sarabeshwara when special Poojas are conducted for the Lord in the temples.

Sharaba Fire Lab- This Fire Lab is very powerful to destroy negativity of all forms- whether negative energies, health problems, people or situations impacting your life. Sharaba is the most ferocious Archetype who can guard you as your protector.

When negative spirits invade your success and you struggle amidst problems, Sarabeshwara Yantra will come to your rescue. It will draw its positive circle around you and safeguard you against all the evil spirits and curses in life.