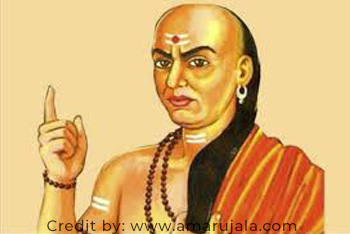 Guru Chanakya is one of the most intelligent and revered Gurus of India who was well versed in Teaching, philosophy, and economy. He is also called as Kauṭilya or Vishnugupta. He is one of those iconic royal advisors, whose teachings are considered as those important teachings, which are highly helpful even today. His political treatise, the Arthashastra, has been read, appreciated and translated in many languages across the world. He has mastered political science and is one of those precursors to classical economics. He has been the fundamental pillar of establishing the Gupta empire.

Birth and Life of Guru Chanakya:

Renowned as the master strategist, he was born in the year 371 BC. There are several versions of his birth and life. It is also believed that he had an ugly appearance, and was highly ridiculed for his looks. The common among them is The Buddhist version, the Jain version, the Kashmiri version, and the Vishakhadatta’s Sanskrit Mudrarakshasa version. It is believed that he was greatly insulted by the Nanda emperor, his father was brutally murdered by the king and his army. The vengeance which grew right from his childhood days was instrumental in developing himself as an intelligent man and also a great strategist.

His vow to be the destroyer of the Nanda empire has made made Chanakya to sharpen his mind, and to select a small lad, and trained him with all qualities to be an emperor. He then became the advisor and led Chandragupta to rule and enhance his empire. It is believed that he was the advisor for Bindusara, Chandragupta’s son, and his successor. There are several conspiracies that he starved himself to death, and some people believe that it was the court conspiracies that led to his demise.

Guru Chanakya was instrumental in raising King Chandragupta right from his childhood and taught him various sciences, history, politics and the nuances of establishing the kingdom. He is also called as King Maker in Indian History. He helped the king to form a small army, and entered Pataliputra, which was the capital of the Magadha kingdom. and He initated the war and led the Mauryan kingdom in the path of success.

His immense knowledge in politics, Vedas, and phycology has made him the master strategist. His book Arthashatra, in Sanskrit which translates to “The Science of Material Gain”, is the forerunner for all the management books. “Chanakya Neethi”, which elaborates on various smart and insolent approaches from king to common man, has been one of the greatest works on phycological intelligence. It is believed that his books were lost for many centuries, and those palm leaves were discovered in the year 1904 AD.

His contributions towards the rise of the Mauryan empire is one of those epic changes in Indian history. His biggest forte is his skills, acumen and the perfect way of utilizing the skills of a man which leads to his growth, development and even leads to building a great empire. His works are greatly praised by strategists and have been translated in all languages.