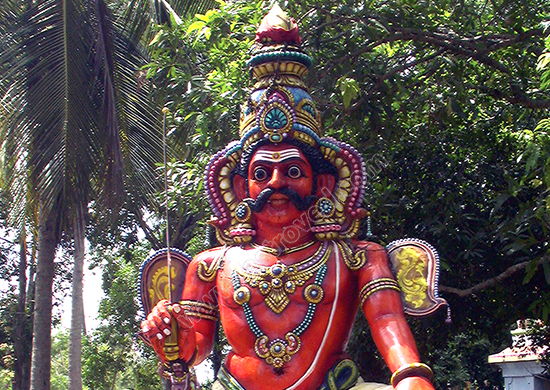 Ayyanar is a village God worshipped in the state of Tamil Nadu. Ayya is a word of respectability and the word “Ayyanar” denotes a deity, held in high reverence. Huge idols of Ayyanar are generally installed outside the villages, in temples, which are mostly open to the sky. He is usually accompanied by stern- looking attendants and animals such as horses, in the form of massive statues made of mud or clay.

Ayyanar is often depicted as a well-built warrior. His larger than life image can be seen seated majestically or standing upright or riding a horse or an elephant. He holds a whip or a scepter, as a show of authority and justice. He is normally accompanied by an escort. When seated, he may have his consorts Poorna and Pushkala on his either side and can be seen wearing a Yogapatta or meditation bond. He is normally seen with his companion, the fierce-looking Karuppasamy, who sports a mustache and holds a sickle in hand. There will also be mud images of horses in his vicinity.

Ayyanar is a guardian deity, who is believed to protect the villages from all sorts of external threats, like natural calamities, wild animals, enemies, and epidemics.

Once, the guardian deity was riding his horse and passing through the Chithakoor village in the Pudukottai district of Tamil Nadu. Fascinated by the environment, Ayyanar wanted to stay in the village itself and went from house to house, asking people to build him a hut there and assuring them that his presence would do great good to the village. However, people did not bother him. Not very happy at their response, he vanished, after telling the villagers that they shall find his horse close to the village water body, the next morning. When people saw the sacred horse near the water source the next day, they realized that the visitor was none other than Lord Ayyanar himself. They immediately built a hut for him there, with materials like leaves and branches, and since then, the Lord is believed to be residing permanently in the Chithakoor village.

In another instance, there were no rains and all the water bodies dried up. People prayed to Ayyanar who took pity on them and asked them if they wanted rains or only the water source to be filled up. People wanted the latter to happen, and through the grace of Ayyanar, the village tank was filled to the brim, without a drop of rain falling from the sky.

It is believed that Ayyanar worship shall ensure that justice would prevail in the village. Worshipping him can provide divine protection from all sorts of dangers.

Ayyanar worship is non-Vedic in nature, which is carried out in villages following the rural traditions, from ancient times. The priests belong to the potter community. While the deity is decorated with flowers, garlands and colorful clothes, and prayers are offered with the chanting of hymns, non-vegetarian food forms an integral part of the offering made to the deity. Domestic animals and birds like goats and hens are also sacrificed to him. While the devotees offer small iron tridents and terracotta horses and pray for getting their wishes fulfilled, annual festivals are held for him during springtime.