Bahuchara Devi is a divine Hindu deity worshiped fervently by women who desire to conceive, or men who are unable to procreate effectively. However, Bahuchara Mata or Bedhraj Mata as she is also popularly known is mainly worshiped by members of the transgender community known as ‘Hijras’ in Hindi. A rooster serves as a vehicle for the Goddess and she is depicted carrying a trident in one hand and a copy of the Hindu scripture in the other.

Bahuchara Mata is easily appeased by selfless devotion and stands for non-violence and innocence. Some ardent male devotees castrate themselves and take to cross dressing to prove their selfless devotion to the Goddess. However, this is not advisable in the current scenario and should not be taken into consideration as a practice.

Devotees sing and dance and chant her name in a fervent desire to appease the Goddess and attain her blessings. 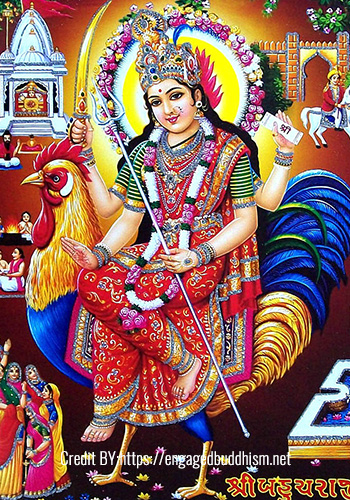 Goddess Bahuchara is believed to have been born in the ‘Charan’ caste of people who are renowned for their honor and commitment to truth. Legend states that once when she was traveling in a caravan along with her sisters, a bandit named ‘Bapiya’ attempted to molest her modesty. However, Bahuchara Devi did not succumb to his overtures and nor did she go to the extreme of killing herself. She however cut off her breast in an attempt to deter the bandit. She took this step to defend her honor and also cursed the bandit Bapiya with impotency.

Such is the honor of the Charan caste, that she did not resort to violence to subdue the bandit, but instead asked him to atone for his sin by dressing as a woman and start behaving like one.

Goddess Bahuchara has been revered by members of the transgender and eunuch community ever since and she is considered as their patron saint. Thus the Goddess serves as a source of solace for the Hijra community and gives them a feeling of belonging. It is also a widespread custom in India to have a gathering of Hijras to bless a new born baby in the household. They are treated with respect and given some money as a token of appreciation.

The act of castrating and dressing like a woman is deeply reminiscent of the ‘Ardanari’ (half-male half-female) form assumed by the divine couple, Shiva and Parvati. A man or woman is considered incomplete until associated with their better half. This serves to emphasize the fact that a person is endowed with both masculine and feminine aspects.

Legend states that a king worshiped Goddess Bahuchara for a male progeny. But though he was blessed with a baby boy, the new prince was born impotent. The Goddess appeared in the dream of the new prince and proclaimed that the purpose of his life was to give up his masculinity and worship her dressed like a woman. This serves to drive home the point that maintaining celibacy is the only means to attain ‘Moksha’ “Liberation.

Goddess Bahuchara is worshiped fervently by many devotees in the Indian sub-continent. The most famous shrine dedicated to the Goddess is located in Mehsana District in the state of Gujarat. This magnificent temple was built in 1783 AD and is adorned with several exquisite stone carvings.

The temple is frequented by devotees who are inconvenienced in some way or the other by sexual problems. They seek the blessings of the Goddess to overcome their shortcomings and get back to normalcy.