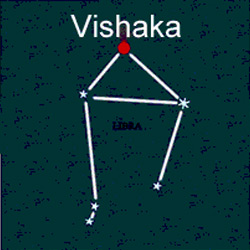 In the night sky, Vishakha consists of four stars in the constellation of Libra: Alpha, Beta, Gamma, and Iota Librae. These stars form a "forked branch" and can be seen under the bright star Spica. In astrology, Vishakha bridges the signs of Libra and Scorpio. It is referred to as a nakshatra of purpose because it gives determination and a single-pointed focus. People born under Vishakha often find themselves at a crossroads. Once they choose a direction, they have the ambition, along with the patience to succeed, even if success arrives later in life. This star fuels competition and also gives excellent leadership abilities. Vishakha is a combination of its ruling deities, the mighty Indra and the purifying Agni. Thus, people born under Vishakha have passionate and courageous warrior energy.

Each Nakshatra is divided into four quarters called padas that contain more specific characteristics of a person born during the pada of Vishakha:

Weakness: Overly talkative; militant; creates quarrels between people; restless; envious of other’s success; critical and finds faults with others; infidelity; overly ambitious; manipulates others to meet their own needs; socially isolated; does not take advice; offensive; stingy; difficult to like; greedy; deceitful; aggressive; authoritarian; quick to take offense; argumentative; jealous; frustration and anger when goals are obstructed; suspicious; possessive; envious; feels suppressed and taken advantage of by others; too many interests; not satisfied by accomplishments.

The temple connected to the energy of Vishakha star is located in Tirunelveli District, near the village Sengottai in Tamil Nadu, India. It is called Tirumalai Murugan Koil. This temple is situated on the Tirumalai hill with several steps leading up to the shrine. This sacred temple is also known by the names Panmozhi, Panpozhi, Panpuli and Tirupathi. Lord Vishnu gave his blessing for Lord Muruga to reside in this sacred site. This temple also reveals a special relationship between Lord Muruga and Sabbarimalai Ayyappan. There is a holy temple for Ayyappan (the son of Lord Shiva and Mohini, the female incarnation of Lord Vishnu) located nearby in Sabhari Malai, Kerala.

Tirumalai Murugan Koil contains powerful energies with the capacity to cure diseases. There are rare medicinal herbs available at this temple. One such herb, Oda Valli, produces a remedy for venomous snake bites and other ailments caused by poison. The Thala herbs present at Tirumalai also have healing medicinal properties. In addition to remedial herbs, a special pooja performed with thirty-two different oils will assist with recovery from disease or illness. One must first rinse in the pool at Tirumalai and then walk around the temple with the oil lamp. This offering produces thirty-two types of healing energy.

Those people born under Vishakha star should visit this temple and present an offering of light to Lord Muruga. Tirumalai has special light rays that form a powerful energy called Vishakha Jothi. This energy is contained within the Vishakha star. Those born under other birth stars may also visit Tirumalai for healing energies. The ancestral ritual of tarpanam may be conducted as well. The Skandha Goshta Pithrus (ancestors) reside in the divine steps of Tirumalai Murgan Koil, so offering tarpanam here will bring blessings to your ancestors.

Vishaka natives, your incense is made with the herb Wood Apple as prescribed by the Vedas.