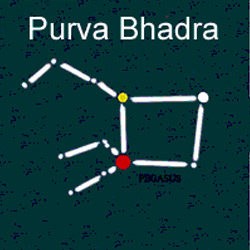 The nakshatra Purva Bhadrapada is located in the constellation Peagasus, the winged horse. It is comprised of the two stars, Markab (alpha Pegas) and Scheat (beta Pegasi). The symbol for this star is the front legs of a funeral cot, which indicates a strong connection to the element of fire. People born under Purva Bhadrapada are independent and capable of sacrificing or purifying themselves for a higher purpose. They often have idealistic goals and aspirations for the improvement of society. This star bestows charisma and eloquent speech that can be used to motivate and educate. There can also be a tendency to criticize or become cynical. The level of intensity and the capacity for transformation are extremely strong in Purva Bhadrapada. This is a star of tremendous perseverance.

Each Nakshatra is divided into four quarters called padas that contain more specific characteristics of a person born during the pada of Purva Bhadrapada:

Strength: Eccentric; scholarly; witty; understands logic; creates prosperity through cleverness; receives money from the government or from wealthy people; economical; has longevity; could marry or be born into a wealthy family; spiritual depth; a warrior; passionate; skilled at earning an income; visionary; idealistic; universal goals; fights injustice; mystical beings; good writer and speaker; imaginative; self reliant; good at reading people; intuitive; march to their own beat; devoted to those who impress them.

The number 7 is associated with the elephant. This is symbolic as Sri Kamakshi, who incarnated as the world’s mother, rode in a chariot pulled by seven elephants. The number 7 is also important because seven statues (murthi) manifested on a bael tree at this temple. Thiru Aaneswarar was one of these seven deities. Thiru Aanam means "seven colored rainbow." It is a propitious sign to receive the darshan of a rainbow at this temple. Thus, the temple is appropriately named after Sri Kamakshi and Tiru Aaneswarar.

Those people born under Purva Bhadrapada can worship at this shrine for seven days and anoint the statues with plantains, honey, ghee, sugar, and offer seven garlands. This will eliminate the karmic afflictions of seven lifetimes. Also, it is recommended to donate seven colored garments at this temple to remove ancestral curses.

Those who are born under a different star but wish to visit this temple will also benefit. They may worship at this sacred shrine continuously for seven days. Meditation, contemplation and yoga performed at this temple will produce benefic effects and assist with career problems. One can also perform a pooja to seven elephants to remove karma from seven lifetimes.

Purvabhadrapada natives, your incense is made with the herb Mango as prescribed by the Vedas.