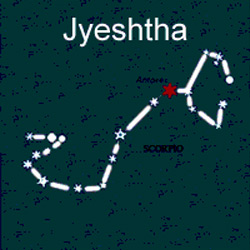 Jyestha is identifiable in the night sky as the brilliant red star Antares. This star resides at the heart of Scorpio and is many times larger than our own Sun. Jyestha means the "eldest" and is a star associated with seniority. People born under this star have the capacity for great accomplishment, but they must first learn to deal with their inner conflicts and wield their power responsibly. The symbol of Jyestha is an earring or disc which represents the energy of Lord Vishnu and Mercury. This bestows protection and intellectual abilities. Those born under Jyestha will defend the vulnerable or underprivileged. The ruling deity, Lord Indra, gives a shrewd and courageous nature. Jyestha people must be cautious of the tendency to become overly concerned with recognition. Their generosity and charity is the key to establishing authority.

Each Nakshatra is divided into four quarters called padas that contain more specific characteristics of a person born during the pada of Jyestha:

Strength: Most successful in their family; builds friendships and a support network; resourceful; generous; self-reliant; eventually wealthy; takes charge of the family; passionate; reputable; receives fame and honors; self-reliant; takes control; and get things done; fond of wit; virtuous; satisfied; talented at music; capacity for inventive design; has creative genius; interested in the occult; can accomplish anything they set their minds to; persevere to make a difference.

Varadharaja Perumal Koil is located in the village of Pasupathi near Thanjavur in Tamil Nadu, India. It is commonly referred to as the Jyeshta Temple because the energy of this shrine resonates with that of Jyestha star. An incarnation of Lord Vishnu, Sri Varadharaja Perumal resides at this sacred vortex. Varad means boon and Raja means king. Thus, Sri Varadaraja Perumal is the royal one who offers blessings to the world from this temple.

Just as Lord Vishnu manifests among the stars in the heavens, he also manifests among those who visit Pasupathi Koil. The twenty-seven nakshatra goddesses visit this temple each day and perform a marriage festival to Sri Varadaraja Perumal. Also at this sacred energy vortex, Sri Periya Nambi Swamigal meditated on Lord Vishnu with full devotion and contemplation. On Jyestha star day, Lord Vishnu appeared before him in the form of Sri Varadaraja Perumal and offered Divine Grace. The samadhi (still meditation) of Sri Periya Nambigal is located adjacent to the main shrine at Pasupathi Koil. It is auspicious to light a lamp containing three oils and receive darshan at the samadhi of Sri Periya Nambigal on Jyestha star day.

Those people born under Jyestha star should visit Pasupathi Koil with their family. It is favorable to visit the temple when Jyestha star falls on a Tuesday, combining the power of Mars and Jyestha. Siddhas and other divine beings give darshan on this day. These blessings have the ability to remove past life karmas, increase the effects of virtuous action and protect a person’s family. Those born under other stars will also benefit from a visit to this temple. They may offer archana and abhishekam to Sri Varadharaja Perumal and receive the darshan of siddhas who manifest in the light.

Jyestha natives, your incense is made with the herb Rattan as prescribed by the Vedas.