Goddess Lakshmi is a very po ...

Sri Lakshmi is the consort o ...

Create Your Own Hora Chart

Creating a Hora chart can be an interesting exercise of searching for Celestial planets and locating them on the Zodiac path. Locating the planets and taking a note of their exact degrees can tell you a lot about them. Am I trying to turn you starry eyed? Not really! The thought of probing into the Zodiac may appear weird, but exploring the Zodiac represented in your Rasi birth chart can be fun. Just think, isn’t this a great way to develop a rapport and intimacy with the planets that are shaping your life?

“Yes, true, but why would I be inclined to create a Hora chart, especially when I have hardly heard about it!” Well, a Hora chart gives you a peep into very important aspect of your life: the flow of money in your life and the wealth you are destined to enjoy.

Essentials of a Hora chart in Vedic Astrology

Technically speaking, a Hora chart is also one of the divisional or varga charts of an individual. It is another chart that is created out of your Birth chart to study whether the planetary energies support you for creating and enjoying wealth in your life. There are other varga charts for other topics.

The word Hora stands for Hour or the Planetary Hour and it plays a very important role in Vedic Astrology. It is also commonly referred by astrologers as the D2 chart.

Determining the Sun and the Moon Horas

Let us get down to the basics. Hora chart of an individual is ruled by the Sun or the Moon, that in figurative terms represent your Father and Mother. You were born to Earth from them remember! Each sign in the Zodiac occupies a space of 30 degrees. Now, imagine that this space of 30 degrees is shared between your Father and Mother. So, 15 degrees of a sign is Sun Hora the other 15 degrees of a sign is Moon Hora. Sun, Mars and Jupiter are stronger in Hora of the Sun whereas Moon, Venus and Saturn are stronger in Hora of the Moon. Strength or weakness of a planet in the D2 chart depends on the Hora it was placed at the time of your birth.

How about trying to create a Hora chart of Bill Gates?

As Hora chart tells about wealth, let us try to create the Hora chart of Bill Gates, a very wealthy man. This can be done by studying the planets in his Birth chart. He was born on 28th October, 1955, at 22:00 (10.00PM Pacific time) Seattle in Washington State, in USA and his Moon sign is Pisces. 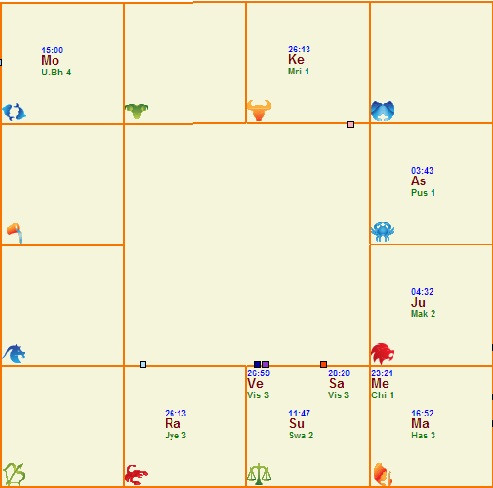 We will now draw a South Indian Vedic chart to show the Hora placement for Bill Gates in his D2 divisional chart. In a Hora chart, all planets assigned to the Moon Hora are placed in Cancer sign (Moon is the ruler of Cancer), and all planets assigned to Sun Hora are placed in Leo sign (Sun is the ruler of Leo). Below is a diagram to Bill Gates’ Hora chart results. 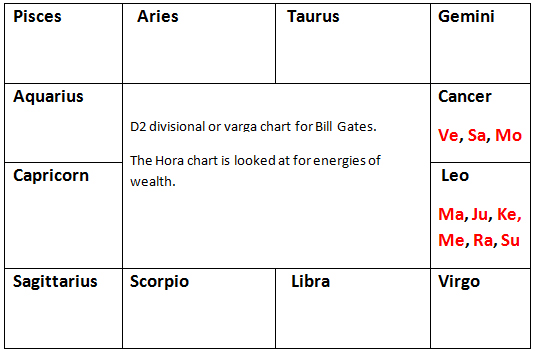 Here we should note that astrological rule for Hora chart is: Jupiter, Mars and Rahu are stronger in the Hora of the Sun. Whereas, Venus, Saturn and Moon are stronger in the Hora of the Moon. After we have placed the planets in the signs of Cancer and Leo as appropriate, we see that his chart shows that planets Jupiter, Mars, Rahu and the Sun are in the sign Leo ruled by the Sun. Planets Venus, Saturn and Moon are in the sign Cancer ruled by the Moon. Effect of Mercury is neutral in the chart. According to rule of the Hora chart, Mercury is strong in both Horas if a person is born during a sunrise or a sunset. Bill Gates was not born in either of those times. He was born many hours after sunset. Look at how all his planets except Mercury, perfectly fit the rule of Hora chart, the ‘Wealth chart’. Wow! No wonder he is one of richest men in the world. Now, you will be certainly curious to know how many planets will support you for enjoying wealth. You can run your own Birth chart for free at https://www.astroved.com/report.aspx?type=chart After you take a look at your chart, draw your own Hora chart and take a closer look at your planets and find out which Hora is supportive of wealth in your life. Well, for a deeper analysis you will certainly need an astrological consultation from a Vedic astrology expert.