Bharani is a bright and active nakshatra. Those born under Bharani nakshatra are determined, truthful, strong–willed, and forthright. They possess attractive personalities and love to live a comfortable life. They are highly energetic and show interest in multiple things.

Those born with the Moon in Bharani nakshatra are spontaneous, optimistic, and courageous. If they think that something is right, then they do not hesitate to fight for it. They dislike being controlled or manipulated by others.

They are intelligent individuals who resolve many issues through their diplomatic skill and efficiency. They have a happy disposition and caring approach. They are friendly and loyal to their close ones and like to provide all comforts to their family.

With their own set of principles, they can never survive domination from others. They seek logic in everything and several times they are disliked for their nature.

Bharani is a star of bearing, and those with the Moon in Bharani nakshatra tend to take on a lot of burdens of other people, finally ending up feeling suppressed and depressed. They dislike competition and exhibit a trait of jealousy. They come across as people who cannot tolerate the prosperity of others.

Due to their outspoken nature, they are disliked by others in spite of having a pure heart. They tend to live in extremes. Sometimes they behave like a new born child, insensitive to their environment, and sometimes they appear fearful and anxious about matters of life.

Tactful behavior is alien to them. They like command over others and are eager to establish supremacy. Friends will sometimes turn against them for their nature of being unable to maintain permanent relationships with anyone.

Regular prayers to Goddess Mahalakshmi will prove highly beneficial to the natives born in Bharani nakshatra. 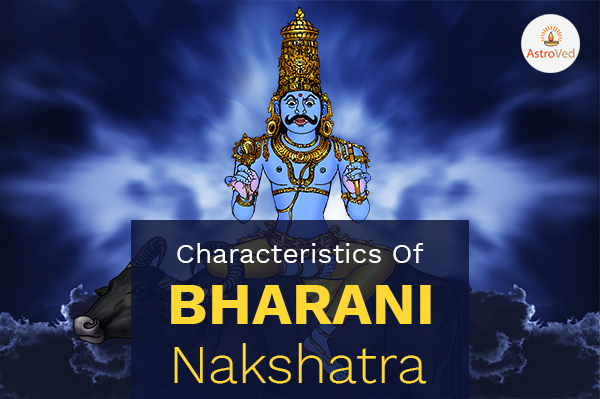 He is medium in size, has a ruddy complexion, large forehead, bright eyes and good teeth. He has a long neck and face. If born during mid-day, he will be very tall. At the temples, his head will be broad and narrow at the chin. Bushy eyebrows is quite common.

Though he is pure-hearted and is not inclined to hurt anybody, most people seem to dislike him. He will express his opinion without bothering about other people’s sentiments. He will not grovel before others for anything. Neither will he work against his conscience. Because of this, he may face many problems. He may annoy even his loved ones on small matters. But when he realizes his mistake or when his foe wishes to bury the hatchet sincerely, he will be willing to forgive and forget.

He is not known for being tactful or obedient. His arrogance may cause trouble. He will never allow himself to be subdued and dislikes bowing to others. He has no use for advice. He has good all-round knowledge and delves deep into any matter. Even though he may do well in public life, he may face criticism and loss of wealth. He likes to be in command and seeks to establish supremacy. He often has to face stiff competition, and sees many failures. Though he appears arrogant, he is actually pure hearted. His life witnesses many ups and downs.

Bharani Nakshatra males should avoid unnecessary arguments and competition. His tendency to fight for certain principles lands him in trouble. He is prone to spreading rumors. He looks after others well but needs to be looked after. Friends and those he helped eventually turn against him. He is unable to establish permanent relationships.

Good and bad times never last long for him. After 33 years of age there will be some positive changes in his life. He can tackle any kind of work, particularly in sports, administrative job, business, music, advertising, art, restaurants or automobiles. He will also do well as a surgeon or judge. He can be successful in tobacco business or cultivation. Success will come for him if starts any activity by goes in the Eastern direction first. Also, the business should also be in the eastern side from his house.

Marriage may occur when he is 27 years of age. He will enjoy conjugal bliss. His wife will take good care of the house and be well behaved. He may be the cause of his father’s death if he is born in the 1st or 2nd quarter of Bharani Nakshatra. The onus is on his spouse to save money as he buys things impulsively. He is very attached to his family.

He neglects his health but won’t suffer from any major health problems. Diabetes, dental problems and severe body pain, high fever, brain afflictions, apoplexy, malaria and ring worms are likely. A poor eater, he eats to live. He fears water and needs to be careful while traveling on water, bathing in ponds, rivers and oceans. He might be injured in the forehead and around the eyes. He is likely to be a chain smoker.

She has a very beautiful figure, with white teeth, though they may be improperly aligned.

She has a modest and admirable character. She respects elders, but she will not listen to suggestions from others and does her own thing. She is impulsive, bold and very optimistic.

She will have her own livelihood. She can make a good receptionist, sales woman or guide. She is the kind who will create her own opportunities. She may make money through sports activities.

Marriage may happen when she is 23 years of age. She has a dominating personality. While she will be happy with her husband, she may face problems from her in-laws. She speaks well of her own family. She will obey only a man she admires. If she marries a lowly-placed man, she will dominate him completely. Bharani nakshatra females can be aggressive, so her spouse needs oodles of patience and tact to avoid friction.

Health will be good though she may suffer from frequent menstrual and uterus problems, anemia, and sometimes tuberculosis.