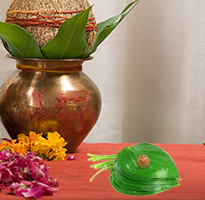 Royal Astrology is a distinct method of prediction that originated in Kerala. Therefore, most of the remedial procedures will be performed in temples in Kerala, as temple remedies.

At times, the remedy requires eliminating malefic elements that are specific to the person, when planetary positions indicate a need for stronger worship or ritual.

In cases where such rituals are not performed in temples, the remedies will be carried out separately at the residence of a designated priest in Kerala, or at the AstroVed Homa Center. In other cases, the rituals will be performed at a venue prescribed in the remedy list as part of the predictions.

Temples in Kerala are powerful energy vortexes. In fact the geographical locations chosen for their construction were not a coincidence or mere human planning. It was rather the formless Divine consciousness that decided to manifest itself in particular forms and in certain specific locations in order to help humanity.

It revealed itself by showing its presence through certain symbols or as a vision to the Rishis (or intuitive seers) and Siddha yogis, who could detect extraordinarily divine energies in those places. So these ancient temples aren’t mere traditional architecture and their locations were chosen thanks to their energetically powerful lands.

Temples that were constructed at those locations became high-energy vortexes.

All Kerala temples enshrine a main Deity that gives the name to the temple. Also there will be one or many upadevatas (or additional deities) who are the associates of the main Deity.

Depending on the purpose of the remedy, the RA reader will identify the main Deity of the temple, your natural affinity towards that Deity, as observed in the Royal Astrology chart, and the specific temple(s) in which the needed rituals will performed.

Abhishekam is bathing the statue of the Deity with one or more materials like water, milk, tender coconut water, rose water, ghee, sandal paste, oil, etc.

Vilakku is the generic name for lighting lamps, showing Aarathi and performing Homa

The prescribed remedies will not necessarily contain all the above categories. They rather depend on the nature and intensity of the afflictions observed from the Royal Astrology chart. Furthermore, the astrologer decides the appropriate remedy by carefully analyzing the chart and choosing between reducing the strength of a malefic planet and strengthening a benefic planet, or both.

Occasionally in case of severe planetary afflictions, there may be a need for prolonged remedies.

Each remedy is complete in itself and will positively produce the desired result. However, the astrologer – based on the planetary positions in YOUR ROYAL ASTROLOGY CHART might prescribe a combination of rituals of short or longer duration, according to the chart’s analysis.

About mantras and chants 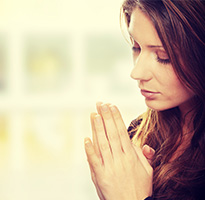 Temple remedies include worshipping the selected Deity by chanting special sounds or mantras called sookthams – which are Vedic hymns to invoke different Deities for specific purposes. Thesookthams are not simply Sanskrit verses. They are actual lines from the Vedas – especially from the Rig Veda and Yajur Veda. They are ‘Apaurusheya’, meaning that they weren’t created through ordinary human consciousness, but were cosmic sounds compiled by the great sage Veda Vyasa. This points to the immense power and transformative potential of the hymns, along with the enormous amounts of energy that they generate.

Another important aspect of the sookthams is that their sounds and invocations allow the full blossoming of one’s potential. Their vibrational sounds can rekindle one’s inborn (and unexpressed) divine energy and shine it forth, which leads to higher states of consciousness and greater success in life.

About the quality of the priest 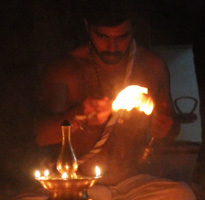 A priest’s essentials characteristics that lead to the successful performance of the ritual and its positive results are: his knowledge, his passion (or shradha), his devotion for the Deity (or bhakthi) and his mastery over the mantras (or mantra siddhi).

But these great qualities cannot entirely substitute your faith and devotion – ideal components for the complete effectiveness of the remedies.

Please remember that during the Royal Astrology Reading, the Divine guides in the entire divination process, the predictions and the remedial measures. The astrologer and the priests are only channels of divine will.

Please allow enough time for gradual changes in your situation and for the positive effects of the remedies. But you could immediately experience higher awareness and notice your strengths, weaknesses, opportunities and risks in a course of action. This is another important benefit of the Royal Astrology Reading, as it can prepare you to meet your future with renewed confidence and divine protection.

To get optimal results