The story of Agastya Muni | AstroVed.com

Latest Articles
Join Us On Our Telegram Channel - AstroVed
Left Eye Blinking for Female Astrology Meaning: Find Out If It's a Good Omen or Bad One
Sudarshana Chakra - 20 Interesting Facts
Saturn Transit 2022 to 2025 in Aquarius and Effects on 12 Zodiac Signs
Meaning and importance of Gupt Navratri

The story of Agastya Muni

Sage Agastya or Agastya Muni is one of the renowned Sages of the Hindu pantheon, and placed among the highest order of “Siddha Saints”. Agastya Mni’s birthday is celebrated on 13 th of January 2020. He has contributed several literary works, and his techniques on Yoga and Astrology are still among the most venerated and the most sought after. There are several legends and chronicles about him, which emphasizes the connection of the Sage with several other growth and development of Hinduism.

Once, Sage Agastya saw some ghosts hanging from some branches of a tree. They were facing their head down. Taken aback by their condition, he enquired those ghosts that why are they hanging from the tree. The Ghosts gave an answer that they were Sage Agastya’s forefathers, and the main reason why they are stuck here is because of the sage himself. He has not produced any child to do the rituals pertaining to the deceased forefathers. Thus to gain salvation for the ancestors, Sage Agastyahas to beget a son to perform rituals and appease the deceased. 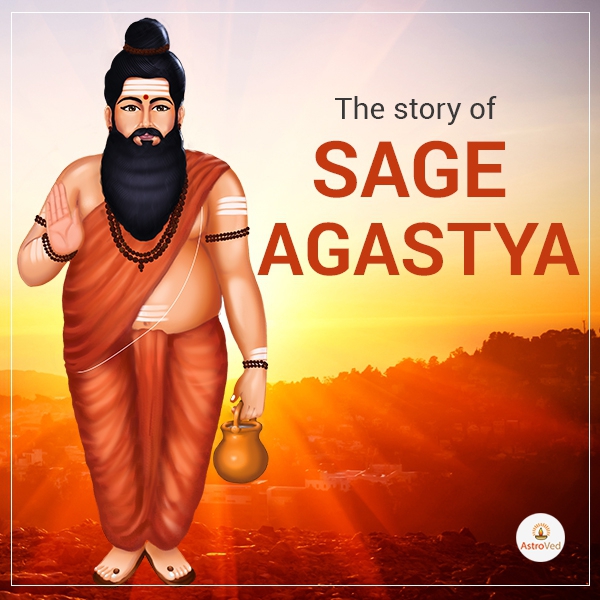 Princess Lopamudra was the daughter of King of Vidarbha. Her beauty and excellent character are highly renowned. On knowing about the princess, Agastya Muni approached the king to seek his daughter’s hand in marriage. The king was taken aback. He was indecisive, as he does not want to part his daughter and get married to a sage, who dwells in the forest. Parallelly, he was afraid of the wrath of the Sage, who is highly powerful. On looking at the father’s condition, Princess Lopamudra understood her father’s dilemma. She consoled her father and assured that she would marry the Sage.

Thus, Agastya got married to the Princess Lopamudra, who was much devoted to him. He even asked her to cast away the rich clothes and precious jewels, as they would live in the forest. Being a woman of high chaste and devotion, she too accepted his words without any hesitation. They both did severe penance and performed several austerities.

Despite their contented life together, Sage Agastya and his wife were unable to produce children. When the sage enquired her, she replied that the hermitage does not suit her to bear children. She also requested the sage to get someplace which is similar to the way she was raised in her childhood. Taken aback, the Sage told her that to give the life of her choice would incur expenses, and as a hermit, he can not afford such life.

Then, she reminded the sage, that she can get great powers through penance. After listening to his wife’s words, he was taken aback and explained to her that the material gains would diminish his strength and powers of peace.

In search of wealth

Since Sage Agastya wanted children, he requests the king to help him with material benefit. But the sage’s request was denied, as the king told him that money was all spent on the welfare of the people, and there is nothing much left with the king. If he still needs money, he has to levy a tax on the people. As sage does not want to burden people, he quietly refused. Then both the King and the sage requested another monarch for some material help. Where ever they go, it was only the same condition! Finally, they approached the demon named Ilvala, who has amassed a lot of wealth.

Their plan was to turn Vatapi into a goat, and then invite a Brahmin for a feast. The brother, who turned into a goat would be cooked and served for the Brahmin as a special dish. Once the meal is over, the demon Ilvala would call his brother Vatapi. The demon would respond from the belly, and tear the stomach of the Brahmin, and come out from his belly, as the demon Vatapi knows “Mritasanjivani Mantra”, a special mantra which could bring back the dead people back to life. Thus they killed several Brahmins and took all their possessions.

When the King heard about the trick played by the demon brothers, he was highly apprehensive to approach them. But, it was only the Sage Agastya, who mustered some courage, and decided to approach the brothers. Once Sage Agastya was served with food, his brother called Vatapi, to come out of the belly, It is also important to note that, others who accompanied the Sage, did not touch the food.

Knowing their trick, Sage Agastya smiled and said. “Whom are you calling”, I have digested my food. On hearing the words of Sage Agastya, the demon king Ilvala understood that the person in front of him was not an ordinary person. He then enquired about Sage Agastya, the purpose of his visit. Then Sage Agastya revealed his quest for wealth, and his need to have money for his wife, and to get a son for him, which can bring salvation for his ancestors. His wife Lopadarma was then presented a lot of wealth by Sage Agastya, and they also had a son.

There is an alternative story that says that the demon Ilvaya was turned into ashes by Sage Agastya. The place where both of them were killed corresponds to today’s Villivakkam in Chennai. Both of the demon brothers were burnt in Kolathur Chennai, which has big and beautiful Shiva temples. Arulmigu Sri Agatheeswarar Temple in Villivakkam was installed by Sage Agastya himself.