“Varahi is a performer. Varahi is a form of Lakshmi. She is also related to the Goddess of Shreem, who is Mahalakshmi. Varahi is the Goddess of the earth plane and deep down into the earth. We can all become prosperous through the participation of Varahi, who will perform money miracles.”
~ Dr. Pillai 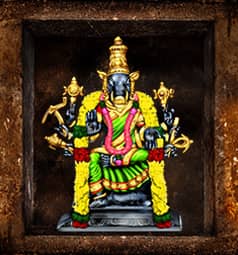 Varahi is the fast-performing Goddess, who remains the symbol of courage and victory. She is a form of Lakshmi and regarded as the divinity for material wealth, and especially gold. The kings in ancient times propitiated Varahi for enriching their kingdoms with immense wealth. She is also the Goddess of the earth plane, who can bestow all that mother earth offers. Varahi, the wild-boar faced Goddess, is said to have been created by Vishnu’s Varaha Avatar. Hailed as the Supreme Mother and granter of boons, Varahi holds Shankha (Conch), which signifies auspiciousness and prosperity, and Chakra (Discus), signifying swiftness and protection. Her other two hands show protective Abhaya and the boon-bestowing Varada mudras.

NOTE : Remember to choose your service start date after making the payment.

Water has the ability to cleanse and purify, and it is the most common item used for performing Abishekam (Hydration Pooja). According to sacred texts, Water Abishekam to Goddess Varahi can be performed especially by those who want to develop courage, become successful and wealthy, advance in their vocation, and enjoy abundance in life.

Milk Abishekam (Hydration Pooja) to Goddess Varahi can be performed by those who want to heal their mind and body. As per traditional practices, performing Hydration Pooja to Varahi with Milk can also help relieve suffering, instill peace, resolve health problems, and bestow vitality.

According to Siddha tradition, Honey carries therapeutic value. In Vedic tradition, it is one of the items used for performing Abishekam (Hydration Pooja) to deities. According to scriptures, performing Honey Abishekam to Goddess Varahi can invoke her blessings to remove all obstacles, relief from sorrow and suffering, and lead a happy, fulfilling life.

The Performer Goddess Varahi remains the generous bestower of boons. Propitiating Goddess Varahi through Coconut Water Abishekam (Hydration Pooja), as per traditional practices, can relieve devotees of their difficulties and sufferings, fulfill desires and bestow blessings for the wellbeing of your family.

Curd is a commonly used ingredient for Abishekam (Hydration Pooja) and is believed to provide good progeny blessings. Curd Abishekam to Varahi, as per scriptures, can invoke her blessings to remove all obstacles, grant good and healthy progeny, and lead a happy, fulfilling life.

Rosewater is a fragrant liquid that is associated with beauty and luxury. As per traditional practice, performing Rosewater Abishekam (Hydration Pooja) to Varahi can invoke her blessings to purify your mind, boost positivity, and fulfill wishes.

Goddess Varahi is quick to answer prayers and grant the earnest wishes of her devotees. Performing Turmeric Abishekam (Hydration Pooja) to Varahi can invoke her blessings to mitigate the impact of curses and enjoy an overall prosperous life.

Dr. Pillai has revealed that Varahi is a performer goddess who can remove your negative money karma and help accomplish your material goals in life. Performing Sandal Paste Abishekam (Hydration Pooja) as per sacred texts can ensure Varahi’s blessings for a trouble-free and affluent life for you and your children.

This Homa invokes the blessings of Goddess Varahi, the boar-faced incarnation of the Supreme Goddess. Performing Varahi Homa can remove financial obstacles and grant material wealth, comforts, abundance, and protection against negativity.

Frequency of the Homa

Varahi homa will be performed once every month for 3 months. Performing Varahi Homa to the powerful Goddess can remove financial obstacles and grant material wealth, comforts, abundance, and protection against negativity.

Varahi homa will be performed once every month for 6 months. Performing Varahi Homa to the powerful Goddess can remove financial obstacles and grant material wealth, comforts, abundance, and protection against negativity.

Varahi homa will be performed once every month for 12 months. Performing Varahi Homa to the powerful Goddess can remove financial obstacles and grant material wealth, comforts, abundance, and protection against negativity. 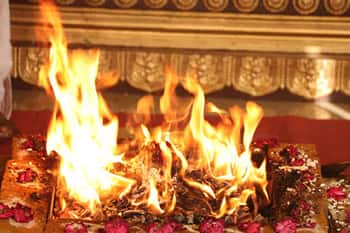 This Homa invokes the blessings of Goddess Varahi, the boar-faced incarnation of the Supreme Goddess. Dr. Pillai calls Varahi the Goddess of material wealth and a performer Goddess who acts very fast. She is a powerful Goddess who is worshipped in Shakta (Goddess), Vaishnavite (Vishnu), and Shaivite (Shiva) traditions of worship. She is also hailed as the granter of boons and fulfiller of desires. Performing Varahi Homa can remove financial obstacles and grant material wealth, comforts, abundance, and protection against negativity.

According to sacred texts, Varahi is the Goddess of the earth, with the face of a wild boar, and holds a Dhandam (staff) in her hand as a symbol of protection. She is considered the embodiment of Dhairyam (courage), Veeryam (valor), and Vijayam (victory). Devi Mahatmyam describes that Varahi was created as one of the Saptamatrikas (7 Maiden Goddesses) by the Varaha Avatar of Vishnu to fight the demonic forces. She is also is the commander-in-chief of the army of the supreme Goddess Lalita, who is considered as the ultimate Shakti and the highest aspect of Goddess Adi Parashakti (Primordial Supreme Feminine Energy). According to Dr. Pillai, her blessings can transform your material life and help you accomplish goals fast.

Varahi Homa is performed by fully qualified Vedic specialists familiar with the nuances of the ceremony and adhering to strict Hindu traditions to ensure the best results. This fire ritual can be performed based on considerations arising from your birth chart, or in some cases, during specific Horas. Our astrologers ensure the ceremony is scheduled on auspicious occasions and timings, depending on the needs and wants of the individual.

According to sacred texts, offering your prayers to Varahi through this Homa can bestow the following blessings:

What will i receive?

You will receive the sacred grey ash powder from the homa and kum-kum (Red Vermillion Powder), blessed in the ritual. You can keep it in the meditation altar and duly apply it on the forehead as and when required to invoke the divine blessings of the deity.

Prasad will be shipped from Chennai, Tamil Nadu within a week after the entire set of rituals is performed. Please allow 2 - 4 weeks for international delivery.

Note: The shipment of the Prasad for Poojas/Abishekam starts only after the completion of the service.