Ranbir Kapoor was born with Taurus rising sign and the Capricorn Moon sign. His Sun sign is Virgo. The unique thing about all this is that his Sun, Moon, and Rising signs are all earthy signs. It means he’s very ambitious, focused, hard-working, and materialistic. He’s born with great yogas and was born to be very successful as his D1, D9, and D10 chart has the same Rising Sign(Taurus).

Yogas and Pathway to Stardom:-

Ranbir Kapoor was born in a very famous filmy family which has its own legacy. He took birth with a Gold spoon in a very aristocratic and wealthy family in rich culture. This happened due to Moon in the 9th House and the Venus-Sun-Mercury combination in the 5th House. This celebrity has Neecha Bhanga RAJA Yoga in his horoscope, which makes him very popular and highly successful in life. This Neecha-Bhanga Raja yoga is very potent to make anyone famous and give them great heights in their career.
This yoga was formed in the 5th House of Ranbir Kapoor’s horoscope. Venus is the karaka of Cinema, the showbiz world, etc., got debilitated in the 5th House in the Virgo sign. Still, the presence of Virgo’s sign, lord Mercury in the same place destroyed the debilitation of Venus. It made Venus and Mercury a mighty auspicious yoga called Laxmi-Narayan Yoga and Neecha Bhanga Yoga. This yoga was formed in the 5th House, the karaka of Cinema, acting, and films. So, Ranbir Kapoor was destined to be a famous and very successful eminent actor in his generation. His Venus, the karaka of Cinema, acting, Mercury, the karaka of dialogues, expression, communication, and Sun, the karaka of success, wealth, and fame, make it very clear about the rise of Ranbir Kapoor as a Super Star in his career.

However, Saturn in the 5th House may have delayed his progress and completion of films to some extent. Ranbir Kapoor has been working in the industry for almost 15 years now, and he’s very successful and famous but still has a long way to go to reach the superstardom level like Rajesh Khanna, Amitab Bacchan, Salman Khan, and Shah Rukh Khan. Although, his horoscope indicates that he has the full potential to become the number one Star of Bollywood in the coming few years.
Ranbir Kapoor debuted in the industry in 2007 during Mahadasha of Rahu and Antardasha of Moon, which gave him the limelight from 2007-2008. Moon is the karaka of the masses, and Rahu in films signifies unprecedented popularity and hysteria in the masses. So, Ranbir Kapoor gained instant popularity from his debut film” Saawariya” and one other hit film,” Bachna Ae Haseeno,” during this period of Rahu-Moon. Moon in 9th House helped him shape his career. 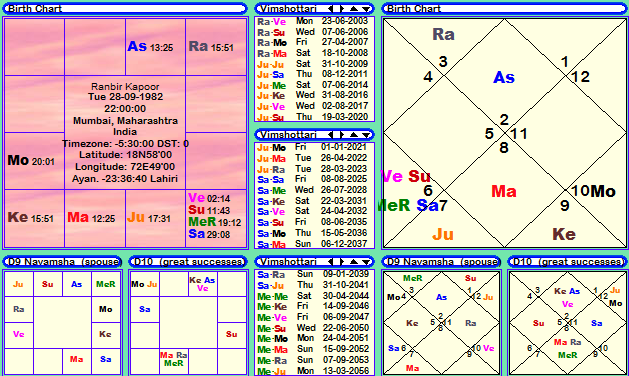 Regarding his romantic life, he has been accused of having several love affairs and not settling with anyone until 2016. He’s been described as “Casanova” by the tabloids. Actually, in reality, he’s a hopeless romantic and wears his heart on his sleeves. The 5th House and 7th House are houses of love, romance, and marriage. The presence of Venus and Mercury in the 5th House as 1st lord and 5th lord gives him charm, charisma, appeal, and attraction, which no one can resist. His chart indicates successful love affairs, but Sun and Saturn’s presence in his 5th House weaken his relationships and get dull with time. That’s the reason his relationships were not long-lasting.

He’s main two famous breakups happened in 2011 with Deepika and in 2014 with Katrina. The reason was Saturn in the 5th House and the Dasa period of Saturn. During that time, his MAHA DASHA was of Jupiter, and Antardasha was of Saturn during both times.

Mars, the 7th lord in the 7th House, will give him a very passionate and warm married life with his newly wedded Spouse, Alia. He got Married in the main period of Jupiter and Sub period of Mars as Mars is his 7th lord in the 7th House. The 7th House and 7th lord denote marriage and married life. The presence of 5th lord Mercury in the 5th House and 7th Lord Mars in the 7th House can give him stable Married life full of happiness and joy. However, the presence of Saturn in the 5th House and its 3rd aspect on Mars in the 7th House may cause conflict, misunderstandings, and confrontation with the spouse. It can also give temporal setback and separation with spouse as Mars is in Scorpio sign in the 8th House. His spouse Alia may suffer from health issues as the 7th lord; Mars is in the 6th House in the D9 chart.

His rise happened in Jupiter’s main period and Jupiter’s sub-period from 2009 to 2011. He became a bankable star and A-league actor during this period. Ranbir also gave a few hits during the Jupiter-Saturn period but had some flops. His acting talent comes from a promising combination of Sun-Venus-Mercury in the 5th House. The presence of Jupiter in the 6th House in Libra sign as the 11th and 8th lord gave him Vipreet Raja Yoga and made him successful in its Main and Sub period. Jupiter’s main period till August 8, 2025, will be bliss for this charming actor.

The current period of Jupiter –Mars till March 2023 and the period of Jupiter-Rahu till August 8, 2026, will be a golden period in Ranbir Kapoor’s acting career. He may become the number one star and the highest-paid actor in Bollywood in the coming years. His luck will be high, and he may reach the peak of his Stardom and great heights in his career during the coming three years. The glory period of Ranbir Kapoor started in April 2022, and it will be there till July-August 2026.

We wish him all the luck, happiness, and success in his life. Good Luck