Krittika is the third nakshatra out of 27 in the constellation. The shape of this nakshatra is like a tool, which stands for creation and annihilation of emotional desires. The presiding deity of this nakshatra is Agni, fire God. Hence it is known as star of fire. The planetary ruler is Sun.

The power of this nakshatra is to burn away negativity to get to the truth. It has the power to bring a desired change in a form by burning out impurities or wrongs, and gives birth to purity, virtues and morality.

It is the birth star of Chandra, the Moon God. Moon is exalted in this nakshatra. Krittika falls under portion of Mesha Rasi (Aries sign) and in a portion of Rishabam Rasi (Taurus sign).

Bright side of Krittika

Those with the Moon in Krittika are full of creative energy with a strong dominating nature. They like to take up big projects as they are by nature, highly ambitious and self-motivated. They are self-centred, self -confident and effusive.

They have the ability to discern and detect even the minutest details that stand in the way of success and to attain perfection. They will identify, scrutinize and remove any imperfection, as they possess a strong sense of perfection.

Emotionally, they need constant praise and attention. They become encouraged and motivated when attention and applause is given to them. They are dissatisfied in environments where they cannot shine.Read more on Krittika Nakshatra Dates

They are supremely self- confident, whether they are right or wrong. They are sharply decisive and like to lead others as they possess a commanding personality. They enjoy power and are seen with learned persons. They believe in persistent effort and hard work.

They act as good advisers and show right direction to people who seek their help and counsel.

Shadow side of Krittika

They are individuals with stubborn and tenacious nature. One of their characteristics is optimism followed by self- pride. They generally criticize others and overlook their own faults. They are seen as aggressive personalities with a callous and harsh attitude.

Due to their over frankness and inability to be diplomatic, they are socially unpopular. As they get bored easily, these natives find it difficult to pursue a same goal for a long period of time. 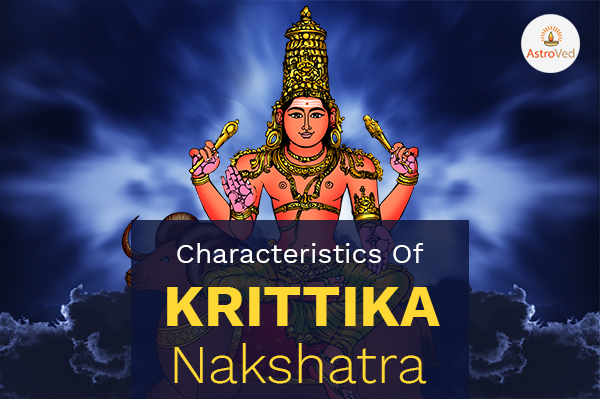 Typically, he has a middling stature. However, if he has Saturn’s aspect, he will be tall. He has a prominent nose, sympathetic eyes, thick neck and a well-built body with big shoulders and well-developed muscles. His face is peaceful and behavior, respectful. His appearance is commanding.

Though he is very intelligent, he lacks persistence as he gets bored easily. He can give good counsel and guidance to others. But he does only what he wants, in his own life.

Friends who pose a threat to his ego and freedom will be discarded by him. However, he would not like to take advantage of others to achieve name, fame and wealth. He has excellent money-making abilities but he has a burning desire to be free of obligations. His actions are perfect to him. He has great optimism and self-pride. He has a stubborn and tenacious character.

He may be quite orthodox but he does not follow old customs blindly. He is persistent and hard working. Though he wants to serve the world, he won’t be able to shine for long. Despite his sincerity, he meets only loss and failure. This reflects his inability to take the right decisions.

He is someone who keeps his promises, whatever the cost.

He has the wherewithal to earn name and fame. Too much sincerity will ruin him. His frustration will build up until he has an outburst and loses self-control. Then he can be dangerous. For his own peace of mind, he should avoid such outbursts. He can argue very logically. Krittika men may often indulge in unnecessary travels. They have a tendency to be thankless and say cruel words.

Krittika nakshatra men usually have to leave their hometown and work in a different state or country. Partnership business is not advised for them. He will get benefits from the government. He will do well as an engineer, a doctor who treats venereal diseases, etc. He may also find work in the treasury department, or work as a draftsman. If he does business, he should try medical, yarn export and decorative industries. He may get a large legacy sometime in his life. He is rather slow in his work but to achieve success, he needs to work faster or he will lag behind.

In married life, luck favors him. His spouse will be devoted, faithful and virtuous. But her health will be a matter of concern and often he may have to live separately. This could be due to work or illness of family members like parents of the spouse etc. and not because of problems between the couple. On the whole, he will be lucky in family matters where he experiences peace and satisfaction.

He is very attached to his mother who may prefer him over his siblings. His father will be pious and well-known but the native is often unable to enjoy his father’s wealth. Up to 50 years of age he will face many trials and there will be many changes in his surroundings. The period between 25 -35 years and 50 -56 years will be favorable. He may have a love marriage most probably or someone known to his family.

His appetite will be good but he does not have good food habits. He may suffer from dental problems, TB, weak eyesight, piles, brain fever, malaria, wounds, accidents or cerebral meningitis.

But he may not be afraid of diseases or maintain a health care routine.

She will be of medium height with a good figure and is likely to be very beautiful up to her 27th year. Thereafter, to abrupt changes, psychological or circumstantial, may make her beauty fade slowly.

She is not the type to give in to external pressure. Therefore, she may experience mental suffering. She is quarrelsome and looks arrogant. She may dominate the household.

Few Krittika females are highly educated. She might work in the paddy field, agriculture, fisheries and other small-scale industries. If she is born in the 1st degree of Krittika or 12 to 13.20 degree of Krittika, she may be highly learned and work as an Administrative Officer, Chemical engineer, Doctor or Teacher. She can also make money as a musician,artist, tailor or from leather products.

Full comforts from husband will not be available to her. Childlessness or separation from husband are likely and in some cases there may be no marriage. If she does not marry early, then her 37th year is often seen to be a good age for marriage. She will not have good relations with relatives as she feels suppressed by them. Actually, Krittika females often live in a world of illusions and tend to be discourteous to even their well-wishers. Often they will be destined to live a secluded life.

Excess work or mental turmoil will affect their health severely. They might suffer from glandular tuberculosis.