Is Dhoni the best Cricketer?

What’s So Special About Dhoni?

An unassuming cricketer from Ranchi with long tresses was tried and tested by the selectors of the Indian Cricket during the 2004 ODI series against Bangladesh. Today, the world knows him as Mahendra Singh Dhoni, India’s most successful cricket captain.

Dhoni was born on 7 July 1981 in Ranchi, Bihar, India. An icon of the Indian cricket team, Dhoni was initially into football. He was a goalkeeper of his school football team. Dhoni found his true calling when his football coach sent him to play some cricket for a local cricket club. Desperate for a job, Dhoni worked as a train ticket examiner in West Bengal’s Kharagpur district in 2001. The locals remember Dhoni as a shy cricket crazy lad playing cricket with tennis balls in the grounds in and around Kharagpur.

First class cricket career for Dhoni began in 1999. It was after playing 5 years of first class cricket that Dhoni got a break to play in an international platform. Luck eluded him for the first four international matches. But it was in the fifth match against Pakistan played in Visakhapatnam in 2005, Dhoni proved his mettle not just as a good wicket-keeper but also as a good batsman. He scored 148 off just 123 balls, which includes 15 boundaries and 4 sixes. Dhoni got a contract from the BCCI in 2005 following his performance as the ‘Man of the Series’ in the ODI series against Sri Lanka. He surpassed Ricky Ponting to become number 1 batsman as per the ICC ODI rankings. He was elected as the captain of the Indian squad for the World Twenty20 trophy in 2007, in the same year; he led India to a victory over arch-rivals Pakistan in the ICC World Twenty 20 trophy in South Africa. Dhoni has led India to numerous other victories – 2011 World Cup, 2013 Champions Trophy, series win in New Zealand and West Indies to name a few. His captaincy helped India to become the first team in more than 40 years to whitewash Australia in a test series. He took India to number 1 position in the ICC rankings for the first time. 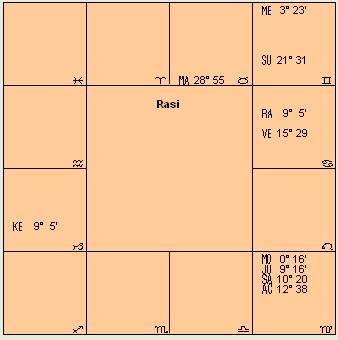 Mahendra Singh Dhoni has been blessed with the combination of talent, skills, luck and overall a good cricketing sense. An analysis of Dhoni’s birth chart (prepared on the basis of his birth details) helped us understand how the fortune showering planets in his astrological chart favored and helped him carve out a successful and exemplary career in cricket.

An X Factor of Indian Cricket

Dhoni is a name to reckon within Indian cricket. He came to the Indian scene to fill in for a wicket-keeper batsman but then surpassed stalwarts like Ricky Ponting, Rahul Dravid, Sourav Ganguly and Andrew Flintoff. Dhoni has instilled his winning qualities among his teammates. He has brought a positive aggression in the team. Moreover, has always shown his weight behind naive and budding cricketers by putting them in center stage in demanding occasions. Years of success and loads of adulation from media and cricket lovers have not changed Dhoni in the core. He is still humble, down to earth and cricket crazy as he was during his formative years.