Vinayaka Chaturthi or Ganesha Chaturthi, the birthday of the murthy of Muladhara – Lord Ganesha, this year falls on September 1st. Lord Ganesha removes fear and He was the only deity who dared even to fight with Lord Shiva. 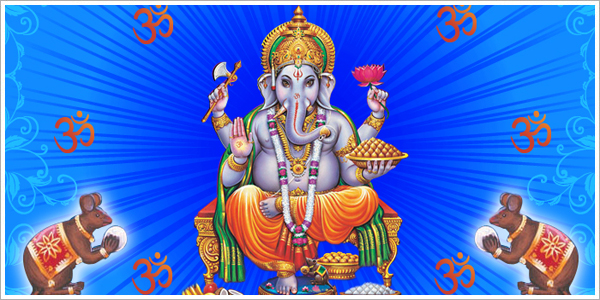 Muladhara represents both the extremes of the fear factor. When it is slow, the person feels highly insecure while when it is in high speesd the person is prone to take extreme risks.

Lord Ganesha balances this Chakra. He stimulates intelligence, enhances your problem solving skills, stabilizes your emotions, removes obstacles and hand holds you to success. Muladhara represents the element Earth hence worshipping Clay Ganesha helps you to access the blessings of Lord Ganesha and to remove your Karma.

The sense organ that Muladhara represents is nose and the sense is smell. With His trunk he urges us to probe into things. They are special features of Ganesha, the only deity with an elephant head.

Gain the blessings of Lord Ganesha with Clay Ganesha, which is a very special offering to make during Ganesha’s birthday. Clay Ganesha can absorb your karma just like coconuts, and when dissolved in the ocean will dissolve your karma as well.

Dissolve My Karma with Clay Ganesha

What Does Each part of Lord Ganesha Symbolize

Lord Ganesha’s head symbolizes the soul, which is the eventual and supreme reality of human existence. His body signifies Maya and His trunk represents “OM”. His ears can hear all our prayers and the snake that runs around his waist, represents energy in all forms.

Ganesha uses a mouse (represents anger, pride, selfishness etc) to ride, which indicates us to have a control on all these evil passions. And finally the “laddoo” that he holds in his trunk, signifies that one must discover the sweetness of the soul.

The cosmic belly of Ganesha contains the seven worlds above and the seven worlds below with their seven oceans held together by the cosmic energy kundalini symbolized as a huge snake which Ganesha ties around him. Kundalini represents the unification of the feminine Shakthi energy and the masculine Siva consciousness through the Ida and Pingala Nadis, which when aroused gets united and passes through the Sushumna Nadi which marks the enlightenment.

The Kridakhanda of the Ganesha Puranas narrates the stories of four incarnation of Ganesha in the four different Yugas.

According to Sri Chandrasekara Saraswathy Swamigal – the former Sankaracharya of Kanchi mutt, Ganesha reinvents Himself and incarnates in every Yuga according to the thought patterns of the Humans that prevail during that specific epoch. Swamigal declared that in this kali yuga, it is the Naramuga Ganesha that is going to be powerful, because He is the Ganesha for this age.

Dr. Pillai, the renowned spiritual scientist has remarked “We sacrificed 2 truckloads of coconut to Naramuga Ganesha who is in the small shrine of the Temple in Thilatharpanapuri in TN, India. AstroVed employed about 20 people to break the coconut. As a result, the temple that was in a small shrine of 6 ft by 6ft space and was unnoticed so far, became so popular that, now a big temple is being constructed. It is all because of the worship we do. Ganesha has become more powerful and a big temple is been constructed. Therefore with the rituals you empower the God and as the God gets empowered He empowers you”.

The Power of Ganesha is the primordial energy of whole cosmos and it gets multiplied on Ganesha Chaturthi. Lord Ganesha lifts our consciousness to the next chakra, uniting us with our inner guru, thus reaching the third eye where the root source as Ganapathy that is symbolized by the Root Chakra, the Muladhara.

Worship Lord Ganesha to gain His blessings this Vinayaka Chaturthi!