Should We Worship Hindu Goddess Lakshmi only for Wealth

Goddess Lakshmi is perhaps the most popular Goddess, widely worshipped in all households across India. She is popularly known as the Goddess of Wealth who mitigates poverty and brings material prosperity. But, we often miss out essence of her energy that makes her Divine, the fact that she also represents Dharma (law of morality), and Spirituality. This is precisely why she seeks Lord Vishnu (the second God of Trinity, who upholds Justice to preserve this World) as her companion.

She brings material, mental and spiritual prosperity in your life when you perform pooja or meditate on her benign and beautiful form seated on a full-bloom lotus. You may also visualize the event of Churning of the Milky Ocean and Goddess Lakshmi emerging from the water as a precious gift for Gods. 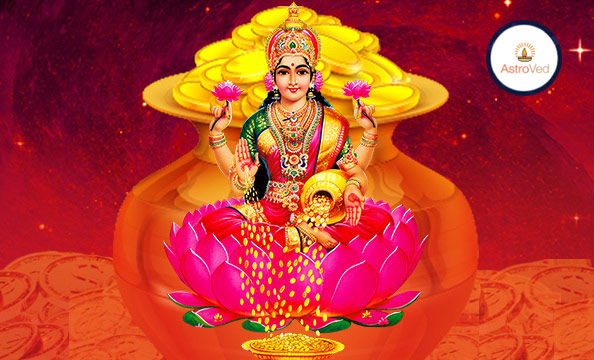 Connotation of Lakshmi beyond material prosperity:

It is said that King of the Gods Indra is happy when Goddess Lakshmi is with him. In heaven, Lakshmi represents Sachi, Indra’s wife. He enjoys wealth, prosperity, creativity and spiritual contentment due to her presence. But Lakshmi does not like to live in one place for a long time, she keeps moving from one place to another. This makes Indra insecured, and he is always chasing Lakshmi for preserving good fortune. Once, when Indra was intoxicated with joy and pleasures of life, he disrespected the sage Durvasa, who got enraged for being insulted and cursed Indra. Under spell of kama that Lakshmi brings along with her, Indra had also begun to ignore his Guru Jupiter. So, eventually Lakshmi left heaven and descended to the world under the Earth known as Patala where she is daughter of Sage Bhrigu.

During Churning of the Milky Ocean, Lakshmi emerged again from water and found her place among the Gods. She married Lord Vishnu. She is always by his side, representing Divine Shakti / Mother embodying pure love and forgiveness for devotees. She brings contentment to those who rise above materialistic pleasures of life and not stuck in restless activity of amassing wealth and indulging in pleasurable pursuits.

Connection between Lakshmi and the Demons of underworld:

When you seek Lakshmi as Goddess of Wealth, for material prosperity, money, and pleasures of life, she is connected to the underworld because these are the characteristics of earthly life, and wealth and minerals are exhumed from below the Earth. So, she is also daughter of Sukra (Venus), who is the Guru of Asuras (demons). In certain mythological stories, she is the daughter of Varuna, God of the sea. This signifies that she is wife of a God and daughter of a Demon.

To the Demons, though she brings Money and Wealth, what entails them are negative emotions like fear of loss, insecurity, restlessness, jealousy and strife. As Demons are greedy, unlike Gods, for material wealth, she feels liberated and contented when she is with Lord Vishnu. To the Gods she is a Divine force who brings wealth, purity and wisdom.

This ancient Vedic mantra essentially awakens desires and traits in your consciousness through words of praise for beautiful attributes of this Universe. Goddess Lakshmi has been perceived as the archetype that is the creative force of Lord Vishnu, and she helps you accomplish higher intellect, growth in life, spiritual prosperity, and material well-being. She stands for fulfillment of your different faculties.

Read our related articles: The Goddess of Wealth, Beauty and Good Fortune