Prince: A Life of Music

To use a Native American turn of phrase, the musician/composer Prince (birthname: Prince Roger Nelson) has “walked on” the same week Queen Elizabeth II turned 90. He was only 57. NASA tweeted a picture of a Purple Nebula in honor of Prince who was highly regarded for his Purple Rain album.

When I read his age in the news announcement of his passing, I thought, “Wow, he did not complete his second ‘Saturn return’.” Saturn is a planet that does have impact on our longevity.

Saturn takes 29 years to transit all the way around the Zodiac. When a person is age 29, it is the first time Saturn returns to where he was in the birth chart. For many people the energy of Saturn during that year triggers a kind of recapitulation of their life, and they may make major changes: get a new job, move someplace different, start or end an important relationship, etc. It is said if young people start a regular meditation habit before they turn 30, it will be of immense benefit for the next 29 years.

The source for Prince’s birth data comes from AstroDataBank which rates the reliability of the data as AA (an excellent rating) with the source being his birth certificate/birth record. 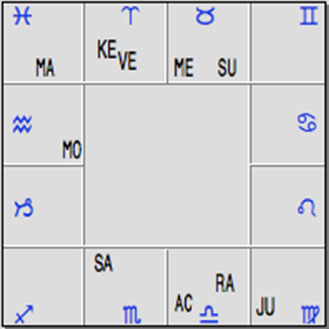 Prince was born on a Saturday, a day ruled by Saturn, planet of discipline and strong work ethic. Prince was known for putting his heart and soul into performances. When told it would be raining at the Super Bowl and asked if he would be ok with performing in that, he just asked, “Can you make it rain harder?”

His Moon was in the star (Nakshatra) of Shatabhisha, a star of material prosperity and healing energies. For some people, he was a healing icon who encouraged others to be themselves saying, “Despite everything, no one can dictate who you are to other people.”

The Zodiac sign coming up on the eastern horizon (sometimes called Ascendant [AC] or Lagna or Rising Sign) at the moment of his birth was Libra, a sign of balance and harmony, backdrop for his character and personality. It is said he had a “swear jar” at his residence, and anyone who swore had to put some money in as he valued a congenial environment.

Prince was famous for being very androgynous with his appearance at his concerts. The Zodiac signs have several attributes, and one of them is the quality of masculine or feminine energy.

In addition, Venus rules Libra, his 1st house of self, character and personality. Venus sits in Aries, a sign of action and adventure. This placement is said to give a lot of passion to a person.

His Venus sits in the star Bharani, a creative star associated with Shakti or Goddess energy and symbolized by the yoni (female private parts). Bharini is also said to be a star of name and fame. Bharani is a star that Venus rules.

All this added to his ability to project androgyny and sexual appeal. Venus rules clothes and fashion, and Prince was well-known for colorful and striking ensembles in his choice of performance costumes.

The Moon rules mind and emotions. Prince’s Moon sits in Aquarius. The placement of his Moon contributed to his attractive, lean appearance and supported his generosity to others. Aquarius is considered the most humanitarian of all the Zodiac signs. After Prince’s death, Reverend Al Sharpton revealed Prince had been quietly generous in donating money to the family of Trayvon Martin, a young man whose death had spurred the Black Lives Matter movement. Prince claimed, “Compassion is an action word with no boundaries.” He was known for being unselfish in mentoring other musicians.

All of the Zodiac signs are associated with elements (fire, earth, air or water). Prince had his 1st house of self in Libra, an air sign, with Rahu, a planet that can give blessings of innovation and originality. His Moon was in his 5th house of creativity and projects in Aquarius, an air sign. Support from air signs is said to help bless musicians and singers. Prince said, “I am a musician. And I am music.”

His other planets were spread out across signs representing all the other elements which gave him a good sense of being centered. He asserted, “A strong spirit transcends rules.”

Mars, a planet of action in the 6th house gave him support for transcending challenges (destroying difficulties) as well as helped him be physically active on stage.

Jupiter, known as “Guru” (Teacher) and the planet of spiritual teachings, sat in his 12th house of enlightenment and gave support for his spiritual growth and faith. Prince was raised in the religion of 7th Day Adventist (which may have influenced him to be vegetarian) and later in life he became a Jehovah’s Witness. He was simply “Brother Nelson” at his local Jehovah’s Witness Kingdom Hall.

In addition, Ketu, the “saintly planet” of detachment and longing for liberation, sat in his 7th house of relationship. This placement is said to give fresh approaches to relationships and help lead a person toward idealism and spirituality.

Lady Gaga posted in social media a lovely tribute to him: ““Isn’t it amazing Prince shared his soul with us so deeply before his death, and now after we will be replenished endlessly by both his legacy and all that he still has to give from the beyond. Thank you for sharing your life with us Prince. Giving up your anonymity because you felt compelled to share your gift. We learned so much. You just found God early, he needed you upstairs to innovate in heaven.”

Valli is available for ½ hour and 1 hour Live Astrologer Consultations (LAC) at AstroVed (USD global version only). She encourages people to create a free account at AstroVed and run free reports about their own Birthchart, Birthstar, Moon sign, and Planetary Influences. This is a simple way to begin to make friends with astrology.